By: Christine Preusler Posted: May 8, 2018
Follow "The Hosting Blog" daily as hosting experts, programmers, and tech managers go in depth on a variety of tech-related topics.

TL; DR: Information overload is real. Big data is powerful, but to properly leverage it, users must transform overwhelming hordes of online information into actionable insights. Enter Parse.ly. The company’s online analytics suite is like a magic wand, simplifying the process through an easy-to-use dashboard, content-based API, and proven analytics infrastructure. Backed by a knowledgeable and dedicated support team, the intuitive suite helps users rein in data to the benefit of their audience and, ultimately, their bottom line.

We’ve all been there. One minute, you’re taking a quick break to check your newsfeed, and the next thing you know, you’ve fallen down an internet rabbit hole. Behind those web binges are sneaky little recommendation algorithms that keep us compulsively leaping from one pool of content to the next.

For chronic procrastinators, such tools may be problematic. But, for brands looking to engage readers, they’re a godsend — a fact the folks behind Parse.ly knew from the start.

“At first, the idea was to take articles and classify them and be a recommendation engine, basically,” said Daniel Banta, Parse.ly’s PR Manager. “So, underneath articles you would see prompts like ‘We noticed you enjoyed this article. You might also enjoy all of these articles.’”

While the algorithms gave Parse.ly its start, it wasn’t long until founders Sachin Kamdar and Andrew Montalenti realized they were just one piece of the engagement puzzle.

“What they really needed was analytics, and Google Analytics wasn’t really up to the task, so they pivoted the company a bit,” Daniel said.

From there, Parse.ly began to focus its attention on data to deliver insight on audience behavior to journalists and publishing houses.

“Oftentimes, data analytics can be really cumbersome and overwhelming, especially if you’re not trained in looking at huge datasets,” Daniel said. “The idea was to make it easy to understand, but also give people the tools to dig in deeper if they so choose.”

Today, Parse.ly has evolved into full-fledged analytics service, allowing publishers, brands, and media companies to understand and engage with audiences through an analytics dashboard, API, and data pipeline. From small businesses to some of the largest media companies around the globe, the company allows users to ensure their content makes an impact on readers.

Explore Real-Time and Historical Analytics Through the Dashboard

Daniel told us Parse.ly put a lot of care into making sure the dashboard is just right.

“Developing that product from scratch took quite a while,” he said. “The idea there is that anyone can understand the data being displayed.”

Users can monitor site performance through real-time traffic information, and even compare those trends to historical benchmarks — whether daily, monthly, or yearly. Key metrics in the dashboard include audience loyalty, engaged time, new and returning visitors, page views, and social shares, among others. Users can explore the data from various angles, including authors, campaigns, channels, publish dates, tags, titles, and sections.

To help the flow of team communication, the content dashboard also includes a reporting suite to distribute data reports with ease. Live dashboard pages can be easily shared across the office or newsroom or with external contributors such as freelancers.

Beyond its content dashboard, Parse.ly’s API and data pipeline enable users to do even more. The HTTP/JSON API allows interaction between existing sites, apps, reports, and audience data. It can help improve on-site searches by employing metadata being processed by the dashboard, and enhance product buildouts through onsite overlays and improved CMS functionality. 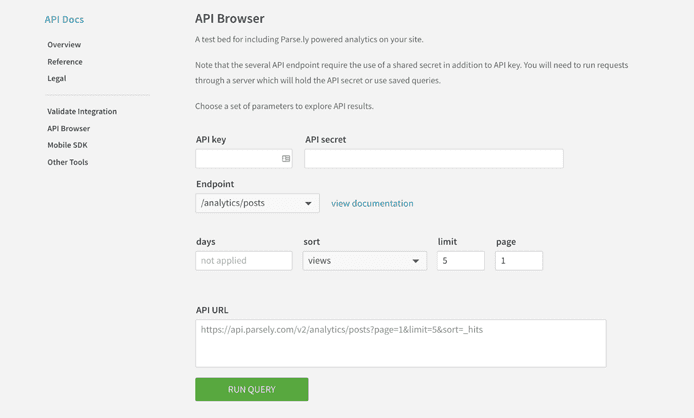 Parse.ly’s data collection infrastructure — which collects, enhances, and streams real-time user and content data — was born out of consumer need.

“We wanted to give our customers access to data in a different form so they can curate the data themselves, put it in whatever application they need and is most natural to them, and analyze it,” Daniel said.

Daniel noted Parse.ly’s customers have diversified with the company.

“What we’re really excited about is a shift that we saw in the last year to an increasing number of customers outside the traditional journalism sphere,” he said.

One such customer is HelloFresh, a meal kit provider recently featured in a case study on the Parse.ly blog.

“They have a pretty big content section on their website where they share recipes, cooking tips, and everything that has to do with being in the kitchen,” Daniel said.

By using Parse.ly, HelloFresh was able to visualize view engagement with their content and determine how to make it more impactful.

“They’re using data to gauge the interest of their audience,” Daniel said.

The result? HelloFresh increased organic search traffic by 122% and page values by 65% in seven months.

The Human Side of Tech: Customer Support and Company Culture

If there’s one thing Parse.ly knows, It’s the value of human touch in a world full of tech.

“I think it sets us apart from the competitors, like Google, for example,” Daniel said. “We actually have a team dedicated to making sure you’re not only up and running with the products, but that you also understand what you’re looking at. They have deep expertise specific to content and audience development. So not only will you be sure to get a human to speak to, you’ll get a human that can help you with your reader or viewer goals.”

“We try to avoid just chasing the latest trend, which can be tricky and unreliable,” Daniel said. “Instead, we listen to customer feedback and then determine our strategy.”

Daniel told us he’s in awe of the determination and grit he sees in his co-workers every day. And this translates directly into the success Parse.ly customers experience.

“The people here are very dedicated to do the best work that they can do,” Daniel said. “They try to be on the cutting edge of what it means to access data and what it can be used for. That’s something I feel is very unique — the motivation and the dedication of the people who are working here.”