By: Christine Preusler Posted: May 14, 2018
Follow "The Hosting Blog" daily as hosting experts, programmers, and tech managers go in depth on a variety of tech-related topics.

TL; DR: As the industry’s first nonprofit organization dedicated to the discipline of technology business management, the TBM Council has created a much-needed community for tech leaders. Today, the group’s 5,800-plus members — including CIOs, CTOs, and CFOs — turn to the TBM Council for business acumen in the form of education, trade standards, and certification. We recently got the scoop on the council straight from Founder Chris Pick, who told us how the group was formed and what to expect on the horizon.

It’s no secret that technology plays a vital role in the daily functions of a modern corporation. Yet, when it comes to cross-departmental strategy, the IT department has historically been marginalized. Unlike their counterparts in finance, sales, and HR, tech leaders have often lacked the opportunity to truly maximize company resources and deliver overall business value.

Apptio — a pioneer of SaaS applications that empower CIOs to align tech investments with business objectives — has been working to solve this problem since 2007. But, while the company’s software proved invaluable as a Technology business management system, many CIOs still longed for a sense of community. Chris Pick, Apptio CMO, realized this in 2010 after a few key conversations with customers.

“They wanted to be mobilized into a group of industry professionals who could talk about how you drive change in an organization in the way that IT is seen as less about changing the toner, to really about changing the business,” Chris said.

Chris Pick told us he founded the TMB Council to advance the discipline of technology business management.

“Our mission was to create a professional organization for IT professionals who really wanted to learn the principles of how IT should run like a business,” he said. “Lawyers get called to the bar, and physicians get certified yearly — yet there was nothing to teach the technology practitioner anything about how to run IT with business acumen.”

Fast-forward six years, and the TBM Council has grown from a group of 36 members to a 5,800-plus member community governed by CIOs from major companies like Aflac, Cisco, and MasterCard. In addition to fostering industry relationships, the council provides tech leaders with the research, standards, and best practices they need to drive innovation.

IT’s Most Active Community of CIOs, CTOs, and Business Leaders

The TBM Council’s rapid success proves there really is strength in numbers. The community also provides members an opportunity to learn from their peers.

“The emotive side of this is that executives today learn by one-on-one interaction or one-on-many interactions,” Chris said. “They, in a very self-deprecating way, can learn from others who may have already fallen forward in situations — not necessarily around technology decisions, but most certainly around the cultural alignment, how they influence others, and how they sell their story.”

The board of directors and a number of guests attended the TBM Council’s 2018 Board Retreat in May.

As technology practitioners, the majority of the TBM Council’s members are on the demand side of the business, but plans are underway to expand the community and include suppliers. Chris told us the new associate membership category will allow suppliers to weigh in on topics like industry standards while contributing to the overall community.

The Core of the Council’s Mission: Education, Research, and Certification

Aside from collaboration, the TBM Council is focused on advancing careers through educational offerings. In 2016, the group released “Technology Business Management: The Four Value Conversations CIOs Must Have With Their Businesses,” the first book ever published on the topic.

“We released the book in London at our European summit, and the demand for it was absolutely incredible,” Chris said.

The book, which helps IT leaders become better service providers, value partners, and business drivers, now serves as the foundation of the Council’s education mandate.

Chris Pick spoke to the audience at the November 2017 TBM Conference in Las Vegas.

“We immediately went and built courseware from the book,” Chris said. “We now have a two-day course, a one-day course, and a half-day course where the book is a prerequisite, and then we walk people through a TBM foundational executive certification class.”

Going forward, the TBM Council hopes to train the next generation of IT leaders at the university level.

“No one goes to school to become a leader of a datacenter,” Chris said. “Our belief is that we need to train the next series of leaders in app dev, in infrastructure, in cloud, in portfolio strategy.”

In the same way the International Financial Reporting Standards (IFRS) provide a common language for accounting, Carl suggested that IT professionals should have a standardized catalog of costs. 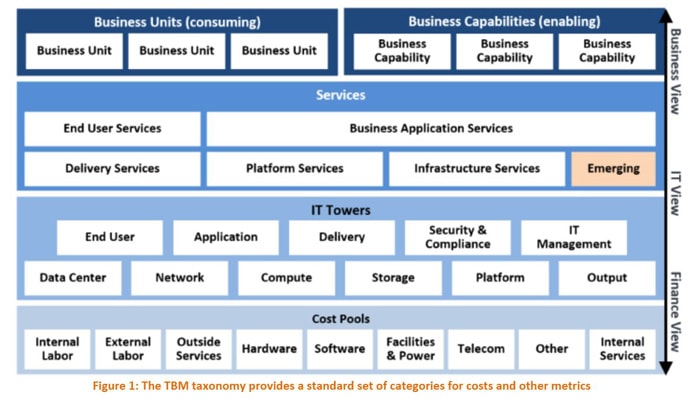 The TBM Council developed a taxonomy to create a standard for IT costs and billing methodologies.

In response to Carl’s suggestion, the Council produced the industry’s first hierarchical taxonomy of IT costs, services, and resources. Today, the taxonomy is governed and maintained by the TBM Council Board Committee on Standards, and members receive exclusive access to the document.

To further its collaboration mandate, the council recognizes innovative IT leaders through the TBM Council Awards, which fall into three subcategories: IT Optimization, Strategy and Planning, and Business Alignment.

IT Optimization, Chris said, is about “running the business effectively, cost optimization, economization — developing really a commercial mindset for IT and running it really lean.”

Strategy and Planning, on the other hand, is about delivering decision-making power to IT, finance, and business stakeholders. Finally, the Business Alignment award recognizes IT organizations that deliver a services portfolio aligned with business needs while also increasing flexibility and transparency.

“Through the award process every year, we learn a lot about the trends people are trying to overcome,” Chris said.

Last year, for example, American Express was granted the IT Optimization Award for using TBM to effectively run its business despite the loss of a notable client: Costco.

“They had applied TBM about three years earlier and used TBM to optimize their run — meaning what they spend on their infrastructure and development — to basically save about $3 million,” Chris said.

By leveraging TBM and agile development, the company not only reduced costs, but also continued to grow.

“So when Cosco hit, they were able to weather the storm around that,” Chris said.

Beyond honoring recipients, these awards and their accompanying case studies illustrate the real-world benefits of TBM, furthering community collaboration and education.

“We learn a lot from that source of discussion,” Chris said.