Piwik 3.0 — A Year of Development Leads to the Largest Release Ever for the Popular Open-Source Web Analytics Platform

The year was 2007 — a “major turning point in the analytics landscape,” according to Matthieu Aubry. Google Analytics had just made their platform available to everyone for free, and site owners rushed to sign up and measure pageviews and unique visitors.

Matthieu had always been fascinated by gathering useful data on Internet traffic and using the stats to understand and improve websites — however, he was leery of a major corporation collecting and storing websites’ data in a centralized database.

“Passionate about the free software movement and wanting to keep control of my own little website’s data, it was just the perfect opportunity to create an open-source alternative to Google Analytics,” Matthieu said.

That creation, Piwik, launched in June 2007 and has grown to be the leading open-source analytics platform. Downloaded more than 3 million times, Piwik is used in more than 150 countries to gain web traffic insights while protecting the privacy of site owners and their visitors.

Trained as a software engineer and not as an entrepreneur, Matthieu said building a stable business and revenue stream took years of learning and experimenting.

“Every day is a new experience, and the learning never stops,” he said. “For sure, all this took a lot of hard work, focus, and long days and nights.”

The beauty of Piwik, according to Matthieu, is the privacy the locally-installed software affords users. By deploying Piwik directly on your server, no data is reported back to the Piwik team.

“It is all stored in your own database and we, as the makers of Piwik, have no way to read it or know anything about it,” Matthieu said. “It’s amazing because it brings our users privacy. Not only do they keep their data to themselves, but they also have control over their technology and are not dependent on any vendor.” 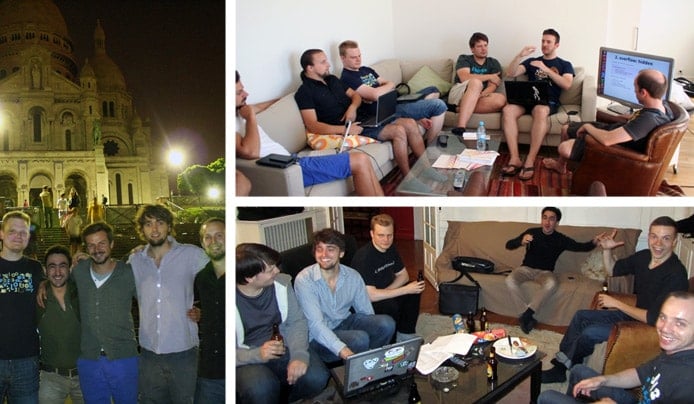 Piwik offers similar features as most competing analytics platforms but prides themselves on real-time reports and widgets that refresh every five to 10 seconds to precisely show the stream of visitors to your site.

Users can also create customizable dashboards and widget configurations to quickly see reports of all your most important metrics. Custom dimensions and variables, paired with an open-source codebase, further extends Piwik’s functionality and flexibility.

“The software is built in the open, and anyone can improve and modify it,” Matthieu said. “It’s extremely flexible, as well. Piwik brings you control at many levels.”

Built in PHP and MySQL and installed on your server, Piwik saves traffic data in your database. The raw information can be accessed through APIs or manual queries.

For less technical users or those looking for simplicity, the Piwik team offers a cloud-hosted version of the platform that removes the complicated aspects while still giving users complete control over their data.

“Our cloud-hosted Piwik is perfect for when you need the power of Piwik without any of the hassles of managing your own servers,” he said. “It’s also very affordable and comes with all our premium features included for free.”

The company behind Piwik, InnoCraft, offers a 30-day free trial of cloud hosting for potential customers. If you eventually decide to take over your Piwik hosting, the team will provide the full dataset to transfer to your own servers.

“With Piwik, you are always in control,” Matthieu said.

A Year in the Making: Piwik 3 Debuts With Improved UI and Performance

As 2016 came to an end, the Piwik team unveiled a completely redesigned platform as part of the Piwik 3 release — the newest major version in about three years. The especially large update included work from 27 contributors and 287 tickets, according to the announcement (Matthieu sent us this comic to illustrate the realistic life of an open-source developer).

An updated interface, Piwik 3’s most noticeable difference, is faster, more responsive, and geared for simplicity, according to Matthieu. Updated menus, dashboards, and reports were changed with the user experience in mind. 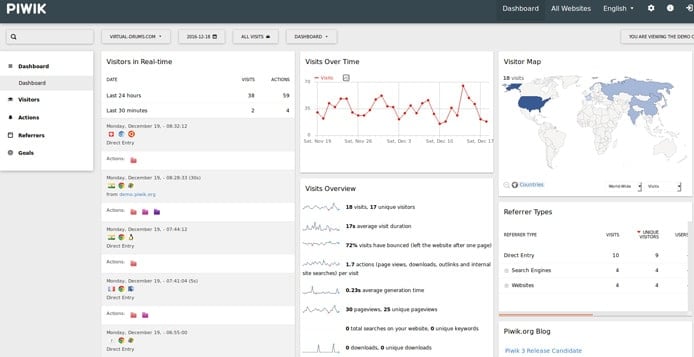 The newest version of Piwik, released in 2016, comes with a redesigned and responsive interface.

“It’s truly important to make Piwik as simple as possible, so we can empower everyone to leverage the power of analytics,” he said. “Whenever we build something new, we aim to provide complex capabilities in a way that users simply understand on first glance.”

The platform got an added boost when the Piwik team refactored most of the program’s CSS, HTML, and JavaScript, enabling Piwik to instantly load multiple reports in parallel without reloading the page.

Also in 2016, Matthieu and the core Piwik engineers formed InnoCraft, a company for helping clients configure, monitor, use, and extend Piwik to gather enterprise-level analytics for customers of all sizes. In conjunction with Piwik 3, InnoCraft released five new paid plugins:

“These are all capabilities that really help a business gain insights and grow,” Matthieu said.

The Piwik plugin marketplace includes more than 75 tools to extend the platform’s functionality. Beyond the previously mentioned premium plugins, InnoCraft also has paid plugins for white-labeling Piwik and a user activity log.

How to Join Piwik’s Passionate Team of Global Contributors

According to Matthieu, meeting and collaborating with people to build the Piwik platform and community has been the greatest reward of the product’s evolution.

“The Piwik team is made of passionate people from all over the world,” he said. InnoCraft employs the active core engineers, while most developers contribute on their own time.

In addition to coding, the Piwik team provides all of the support and much of the business development efforts, being sure to celebrate important milestones like the first million downloads.

“Such milestones are so exciting and prove the importance of our mission,” Matthieu said. “Our work has meaning, and seeing people from all over the world building, piece by piece, all the tools and features we needed to compete with Google, Adobe, and IBM is incredible. We pulled off so many successes with so few resources.”