Co-Founder Josh Koenig on Pantheon: How the Turnkey Solution Empowers Marketers and Developers to Build, Host, and Manage Agile Sites

Faced with increasing political turbulence and polarity, nonprofits like the American Civil Liberties Union are becoming more relevant than ever — and their websites must be able to handle large spikes in traffic.

During the 2016 presidential election season, for example, ACLU.org experienced a 2,500% increase in visitors. But with the help of Pantheon’s high-performance hosting and web management solutions, the nonprofit’s site kept running smoothly with zero outages.

Since then, ACLU.org’s popularity has continued to soar without usability or performance issues. According to Marco Carbone, Associate Director of IT at the ACLU, the site’s stability has been a major benefit to the nonprofit.

“If we had to keep up with DevOps, we wouldn’t have time to focus on the challenges of this new political environment,” he said in an interview.

For the variety of clients Pantheon serves, in industries ranging from financial services to higher education, the story is the same — Pantheon’s hosting infrastructure and development tools make website management a breeze so organizations can focus on more pressing issues.

“Make your people super effective, and you can unlock growth at the top,” Pantheon Co-Founder Josh Koenig said. “Invest your most precious resource — your people’s time — into being strategic, moving quickly, getting ahead of things, and playing offense with your website; then grow your business or drive your mission. That’s really the benefit of Pantheon.”

Thanks to world-class hosting and development for Drupal and WordPress, a user-friendly developer console, and automated infrastructure management, the platform is allowing users to do just that.

High-Performance Hosting and Development for Drupal and WordPress

Pantheon came to fruition after its Co-Founders spent more than five years as web consultants providing open-source CMS solutions through Drupal. Its client base steadily increased, and projects began to vary wildly.

“From a major multimedia website to a platform for financial disclosure for a press release service, they were very different projects with very different users in mind,” Josh said. “But we always had fundamental infrastructure pieces.”

In terms of infrastructure, two common needs stood out. First, companies needed to review sites in-depth before they went live.

“That requires some kind of workflow so that you don’t have developers stepping on each other’s toes, you can keep things organized, and you can show work before it launches,” Josh said. “The CMS technology itself has no bearing on this.”

Pantheon’s team is made up of experts schooled in all things CMS, web development, and hosting.

Second, organizations needed to ensure their sites were fast-performing, able to withstand increased traffic, and could scale as needed.

“That’s also something that doesn’t come for free and requires expertise outside of the CMS itself because, again, we’re talking about the underlying platform.”

As consultants, the Co-Founders identified the same needs among its network of peers.

“We thought, hey, there’s a real need for this, a real market for it,” Josh said. “So we developed approaches to implementing hosting infrastructure that could scale and perform and then — putting those two pieces together — created a development workflow and collaboration pattern that provides a truly representative environment of the structure before a site goes live.”

The platform provides hosting for the two leading open-source CMS solutions, Drupal and WordPress, and both options come complete with access to cutting-edge developer tools, a developer console, automation, and workflow efficiency features. And it’s all done with dependable website security, including fully managed and free HTTPS certificates, automated backups, and one-click updates.

Central Management and Governance Across a Portfolio of Sites

Pantheon’s developer console provides transparency across a project through a real-time web interface that details every site, development environment, team member, and deployment.

“We have many examples from our customer base of what Pantheon unlocks within organizations,” Josh said. “Marketing can have their own dev team and they can be liberated to work at their own pace and do their own thing; they are in control of their own destiny.”

For example, one of Pantheon’s highly successful customers, Tableau, has a billion-dollar business; 90% of which starts with its website.

“It is a lead generation machine, and they have relentlessly optimized that website over the past four years and more than quadrupled their business in doing so,” Josh said. “They’re building a piece of software that attracts people to their products, and that’s something our platform makes possible.”

Josh said the process is not as simple as moving a few page elements to increase conversion.

“It’s more like we programmatically generate 27,000 landing pages and are constantly experimenting with different flows from those landing pages through context to lead capture, etc.,” he said.

Josh told us that Pantheon has been guided by a people-first approach since the very beginning.

“We really want humans to be at the top of the stack,” Josh said. “People should be doing creative, strategic work, and routine work should be automated wherever possible — ruthlessly automated.”

That’s why Pantheon completely automates the infrastructure layer, allowing for continuous delivery by enabling site developers to automate processes via command line or RESTful API and improving quality and velocity through workflow streamlining and automated testing. 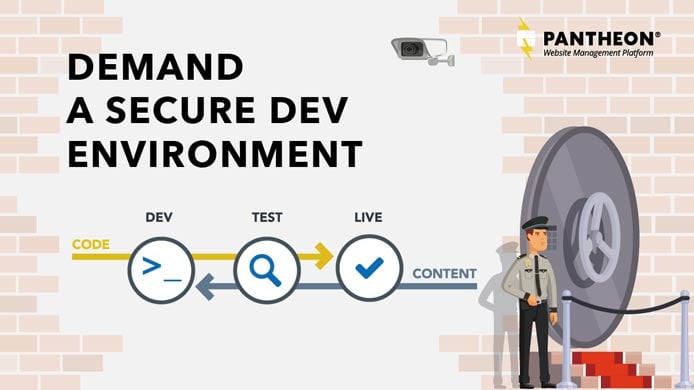 The old-world approach of “we’re going to relaunch it and then we’re done” is not a recipe for success, according to Josh.

“We are really committed to helping teams be successful with the idea that a website is a living, breathing thing,” he said. “That’s why you want a CMS, but on top of that, you need to iterate on the experience, not just the posts and the headlines. We make that a viable proposition.”

Up Next: Expanded Plans and Partnership Opportunities

Pantheon customers can expect to see an expanded selection of plans and pricing in the near future.

“We are going be able to offer a bunch more options that are going to roll out over the summer, including annual plans for the different tiers,” Josh said. “That’s something I’m really excited about — unlocking the self-service type of business using our platform.”

The company also plans to incorporate its network of over 2,000 trusted partner agencies into its pricing plans.

“People who work with one of our partners will get a discount on Pantheon,” Josh said. “What we’ve seen is people who are very successful with Pantheon are engaging professionals around the project, and we want to make that fundamental in our pricing.”

Later this year, the company will also roll out features designed to make the customer experience for those with extremely large portfolios even better.

“What we have today totally works and we have lots of happy customers, which you can see through our case studies — but we can do so much more for that audience,” Josh said. “There’s tons of value we can provide by aggregating information about all these sites. Right now, we offer some things that help with that, but we can do a lot more in the future to make organizations that have to work with that scale more efficient.”