By: Laura Bernheim Posted: September 6, 2017
Follow "The Hosting Blog" daily as hosting experts, programmers, and tech managers go in depth on a variety of tech-related topics.

TL; DR: From humble beginnings as a boutique web design agency to a client list that boasts the likes of Time Inc., Visa, and Disney, Pagely has emerged as a premium host for enterprise-grade WordPress hosting. After identifying WordPress as a promising tool in 2006, Pagely refocused on providing secure, scalable, and speedy hosting services built around the content management system. CEO and Co-Founder Joshua Strebel recently shared the company’s goals for the future, along with how the company he created with his wife became the first to offer managed WordPress hosting.

Joshua Strebel graduated from college on a Friday, married his wife on Saturday, and used the money from the wedding to start what would become a groundbreaking company.

Joshua and Sally originally focused on web design while dabbling in a little bit of SEO marketing and development work in 2003, the days of Adobe Dreamweaver and HTML4. After a few years, the couple had to turn down smaller jobs that required too much work to be profitable.

Looking for a way to automate and streamline the processes of getting clients online, Joshua and Sally turned to an unheralded content management system called WordPress, which had launched maybe a year earlier.

“WordPress was nothing at the time and didn’t have near the notoriety it does now,” Joshua said. “We didn’t know how to market or promote it.”

Joshua and Sally saw modest success with the platform before pivoting again in 2009 to combine their WordPress expertise with high-powered web hosting. The company, rebranded as Pagely, became the first to offer what has since become known as managed WordPress hosting.

“We somehow managed to do the impossible,” Joshua said. “We started the company and started a new channel. We had to zig and zag to figure out how to stay relevant, and now we consider ourselves the Ferrari of WordPress hosting.”

How Pagely Created a $1 Billion Industry and Fights Off Competitors

Before the days of one-click installs, WordPress users needed to manually set up databases and FTP servers to install the content management system. Joshua, Sally, and the Pagely team aimed to make the process even simpler with a system that installed WordPress and enabled users to pick a theme, choose a domain name, and set up email accounts. 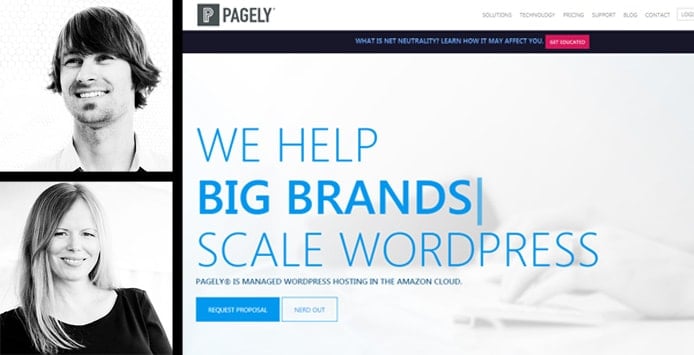 Now, competition from WP Engine, Media Temple, GoDaddy, SiteGround, and the multitude of Endurance International Group brands has transformed managed WordPress services into a $1 billion industry, according to Joshua.

“Every host and their mother are chasing a piece of the WordPress pie,” he said. “As an unfunded player, we’ve had to figure out how to compete as the market became more saturated.”

Even though it might be “uncouth to say the baby is ugly,” as Joshua put it, the 14-year-old WordPress codebase has deficiencies that are becoming harder to address.

“They have a mantra of backward compatibility, so they’re not going to make a change that might break something three versions ago,” he said. “That means they’re hanging onto some bad decisions, even if no one knew they were bad decisions at the time.”

However, Joshua maintains that WordPress should be the CMS of choice for bloggers, developers, and small businesses that can get by on an affordable shared hosting plan with minimal managed services.

“WordPress is still a great way to achieve that goal of driving a great user experience, but it’s a very different use case to keep a WordPress site online when it’s getting a thousand concurrent visitors a second,” he said.

Targeting Customers With ‘Sites of Consequence’

Although Pagely used to cater to those small-scale customers, the company now aims to “solve business and technical challenges for what we call sites of consequence as it relates to WordPress,” Joshua said.

Rather than competing with the ultra-cheap hosting services and multimillion-dollar marketing plans of the industry giants, he said Pagely focuses on “low-volume, high-margin, high-quality, high-touch clients.”

Instead of bloggers and professionals needing a place to host their portfolio, Joshua compared Pagely customers to a company, such as Warner Bros., that needs to launch multiple websites, deal with wildly fluctuating traffic, and protect visitors’ personal information.

“If you are running any WordPress site of consequence with any sort of major stakeholders or requirements, you really should come to Pagely,” he said.

According to Joshua, Pagely distinguishes itself by breaking out of the mold of offering cookie-cutter plans with prescribed features and levels of support.

“We sell solutions based on what the client needs,” he said. “We take everything on. Think of Pagely as an extension of your operations team, working together to solve complex problems.”

Institutes of higher education, including Northwestern University, the University of Florida, and Columbia University, represent a major portion of Pagely’s client roster.

In addition to sensitive student data, many colleges and universities rely on Shibboleth, an open-source project that enables access to multiple systems using a single sign-on.

Pagely, however, doesn’t shy away from the challenge. The experienced and educated staff has included Shibboleth in several WordPress instances for universities, according to Joshua.

“We’ve done a lot of work understanding what those connections look like,” he said. “We have experience with this very specific thing that is very important to universities and the larger higher education clientele.”

Although the WordPress core platform has remained relatively trouble-free for a while, the open-source ecosystem of contributed themes and plugins introduces the chance for vulnerabilities.

“We’ve spent a lot of time and energy trying to understand those relationships between the plugins, themes, and frameworks to do our best to secure the sites for our customers,” Joshua said while cautioning that nothing will be 100% secure.

The company’s security experts work closely with the WordPress security team to address and patch exploits even before they’re made public, Joshua continued.

“We’ll be the first to tell customers when they come onboard, ‘Don’t be storing bank data on this thing. Don’t be uploading plans for your autonomous vehicle that you don’t want to be stolen,'” he said. “It’s WordPress; use it for what it’s meant for.”

Joshua understands that many prospective clients might get sticker shock when looking at Pagely’s pricing structure — the Amazon Web Services-powered VPS plans start at $499 per month. He insists, however, that the company’s services and expertise far outweigh the personnel expenses for managing enterprise WordPress installations in-house.

“Go ahead and invest in your two six-figure salaries,” he said. “Or, just pay us a handsome sum, and you’ll have dozens of amazing people to take care of you.”

With Pagely’s managed services focused on server performance and security, business teams can focus on driving traffic and making sales.

“Yes, you can do WordPress yourself,” Joshua said. “Yes, you may have your own Amazon account or datacenter or engineering, but WordPress is kind of its own animal at times. Pagely takes care of all that.”

Future Challenges and Going Head to Head With WordPress VIP

Although Pagely has carved out a niche among high-end WordPress users, Joshua said the company is seeing a new challenging competitor in the form of WordPress VIP, the full-service enterprise-grade platform run by Automattic, the commercial company started by the co-creator of WordPress.

“WordPress is at an interesting crossroad,” he said. “They’ve built this 28% market share based on ease of use for the end user. Now, they’re trying to understand how to keep that ease of use but push performance and intuitiveness even further. It’s going to be hard to topple that market share anytime soon, but people are certainly trying.”

Meanwhile, Joshua calls Pagely a “surprisingly inward-focused company” that aims to ignore all the industry noise in favor of looking for ways to improve the business.

“As the pioneers of managed WordPress hosting, we are committed to creating a company that subscribes to the same values our parents instilled in us: to work hard, be kind to everyone, and have a conscience,” he said. “It’s with these values that we’ve built a best-in-class service with the industry’s top engineers who care about the communities we serve on a human level.”