TL; DR: Keyboard Help, founded in 1997, is a one-stop shop for everything you need to know about entering accent and diacritical marks on a keyboard. The well-established site began as an academic resource before evolving into a growing repository of language learning technology. Irene Starr, the brains behind the operation, is still updating the site with useful content to this day.

Whether you’re writing a text, sending an email, or creating volumes of content for a website, handling a keyboard is an exercise in efficiency.

The average person types approximately 40 words per minute (WPM), while professional typists usually reach speeds of 65 to 75 WPM. For programmers, speed matters when translating thought to code — and some developers say they can process around 90 WPM.

One way to boost typing speed and accuracy is to get comfortable with shortcuts. Many of us know the basics: Fan favorites like Ctrl + C for copy and Ctrl + V for paste are a given. It’s much easier to get tripped up when typing special characters, such as accent marks. 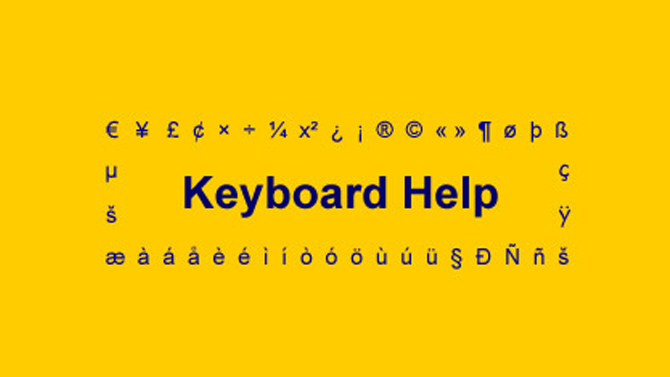 Keyboard Help is an online guide for typing uncommon characters.

Fortunately, resources are available. Search for “Foreign Language Characters” using Google, and one of the first results will take you to Keyboard Help. The reference guide provides a wealth of information on typing international accent and diacritical marks on a QWERTY keyboard — both on desktops and mobile devices.

Founder Irene Starr has regularly maintained and updated the site for more than 20 years. “I add to the site when I notice something that may be of interest,” Irene told us. “A few years ago, for example, I added info about accent marks, etc., on smartphones.”

The growing repository of language learning resources and technology also includes links to helpful third-party information and the latest linguistics news. Moving forward, Irene plans to continue building up the site for the benefit of anyone who uses a keyboard.

An International Language Resource with Roots in Academia

As with many great ideas, the concept for Keyboard Help began in an academic setting. In the ’90s, Irene started serving as the Director of the Language Resource Center at the University of Massachusetts Amherst. The role required her to support more than 75 courses per term and oversee the department’s computer and language labs.

“Few students had printers, so they came to the center’s computer lab to print their documents, then stood nearby scribbling in the accent marks,” Irene said. “This led to signs on each lab computer with instructions on typing the marks.”

In 1997, Irene was preparing for a presentation on accent marks she was scheduled to deliver at a conference hosted by the International Association for Language Learning Technology (IAALT). Instead of printing and distributing lengthy packets of paper handouts, she chose to create brief printed guides with a link to a website.

That site, which found a home on the family’s domain, served as the foundation for what would become Keyboard Help.

“My son bought Starr.net soon after domains became available, over 20 years ago, and oversees it,” Irene said.

Today, KeyboardHelp.net redirects to Starr.net/is/type/kbh.html, and the site is used by visitors of all types — including, but not limited to, academics.

In the early 2000s, Google’s PageRank algorithm (a computational tool named after Google Co-Founder Larry Page that is used to gauge site importance), scored Irene’s site as a 9 out of 10 possible points.

Irene credits the site’s inclusion on Google’s FAQ page for a number of years. In response to a question about improving the accuracy of results when searching for foreign words, the page directed readers to Keyboard Help for instructions on typing foreign characters with any keyboard.

Because of the high score, Irene was able to monetize the site through affiliate links before she took a step back five years ago.

“I stopped having sponsors but still invited long-time sponsors to remain as friends at no charge,” Irene said. “This made me feel that less frequent updating would be OK. I only accepted sponsors who had some connection to language, culture, international travel, etc.”

Much has changed in the language-learning technology space since Keyboard Help hit the scene, and Irene was there to see it all. She remembers when lessons were still taught using resources like audio and videotapes.

The site takes the mystery out of how to enter non-standard accent and diacritical marks.

“Gradually, they moved to CD and DVD, and then online,” she said. “Today, YouTube has an endless array of lessons for language — and most everything else.”

Irene told us that one of the most unfortunate trends she has witnessed was the move away from language resource centers and labs in educational institutions. This included her own lab, despite the fact that the center’s annual budget was less than the admin’s yearly salary and supplemented with paid projects.

“This happened to my center in 2002 when the biggest changes had yet to come, and humanity faculty would have benefitted from help in using technologies effectively,” Irene said.

Irene went on to retire in 2002 and received the IALLT Lifetime Achievement Award in 2003. Today, she continues to update Keyboard Help with relevant tools, tips, and headlines. If you’re looking for interesting linguistic resources, for example, the Keyword Help site is a good bet.

“I just added the Endangered Language Alliance link as it was mentioned in an interesting article by The New York Times,” she said.

The article gives readers a glimpse into the 700 remaining speakers of Seke, an unwritten language from Nepal — 100 of whom live in New York. Irene also includes links to articles on movers-and-shakers in the industry and news about hot topics, such as the demand for foreign language interpreters.

She also aims to keep the site relevant in terms of evolving technologies, such as the rise of mobile devices.

“When I traveled to China and Japan for conferences in the early 1990s, we barely had cellphones — not the amazing small devices that now combine everything from a phone to a camera, GPS, weather, email, a TV, radio, a flashlight, a library, and much more,” she said.

She’s right — a study conducted by the Pew Research Center on mobile technology and home broadband underscores the prevalence of this trend. According to the research, the proportion of Americans who say they own a smartphone has increased significantly in recent years, jumping from just 35% in 2011 to 81% in 2019.

Moreover, Americans of all ages increasingly say they use their smartphone as a primary means to go online. Today, 37% of adults in the U.S. say they typically turn to a smartphone when accessing the internet, compared with 19% in 2013 — just six years ago.

Of that 37%, younger adults are especially likely to use their mobile devices as a primary access point to the internet. And 17% of Americans of all ages say they access the internet through a smartphone only and do not subscribe to broadband internet service at home.

There’s no doubt that the era of mobile has arrived, and that’s why Irene added information about using non-standard accent and diacritical marks on mobile a few years ago. Other times, she’ll add useful information about technical features that she likes.

“Not too long ago, I added info on my tip page, www.starr.net/is/type/tips.html, about Reader View (which I really like as it gets rid of the page clutter around articles and makes for better readability),” Irene added.