TL; DR: In the late ’90s, long before the hosting industry became impossibly crowded with competition, Greg Landis worked full time in the US Air Force. But, between shifts on nights and weekends, he found time to create the company that would become JaguarPC, a hosting provider focused on serving the small business community. Over the last 20 years, Greg and his team have made acquisitions, built a strong physical infrastructure, and overcome quite a few roadblocks. Now, JaguarPC is launching a new suite of products that will give SMBs everything they need to succeed in today’s digital business environment — from shared, virtual, and dedicated servers to managed services and data backup solutions.

In 1998, Greg Landis was working in the US Air Force full time. Although his position in the military kept him incredibly busy, he developed a fascination with the technology behind the growing internet craze, and he was hooked.

“I was curious, so I checked out a few tech conferences,” Greg said. “I talked to some people working for Alaskan ISP companies and thought to myself, ‘I could do this.’”

In his free time, Greg started building Angelfire pages for a growing customer base, but it wasn’t long until he decided to change course.

“I was creating some crazy pages, but my customers were much more interested in the free web space I gave them on the servers I had purchased,” he said. “They didn’t care about actual internet access. And, anyway, it wasn’t long before big companies came along and made dial-up go the way of the dodo.”

The rapidly changing marketplace prompted Greg to create a niche of his own — an early iteration of JaguarPC — marketing reseller hosting packages to SMBs.

“My focus was putting small businesses online,” he said.

Greg Landis told us he started JaguarPC to give the small business community greater access to hosting solutions.

While the new business plan grew his company, it took years before he could leave the Air Force, earn an income, and hire his first employees. After leaving the Air Force, Greg moved to Houston to build his business full time.

“I was swamped,” Greg said. “The hiring process was grueling, but I wound up putting a few other vets on the team, which was really fun and exciting. We have a tenacity that’s hard to train.”

Working with a group of like-minded veterans, Greg watched his hosting business quickly scale. Today, JaguarPC continues its mission to serve the small business community through a number of web solutions, including shared, virtual, and dedicated hosting plans and managed services.

Greg attributes much of JaguarPC’s growth to a number of acquisitions he’s made over the years, including his initial purchase of Aletia Hosting. In 2009, he bought two Houston-based providers, ResellerZoom and HostingZoom.

“While they focused primarily on the reseller side of things, they had also just recently started offering virtual services,” Greg said. “I thought of them as sister companies.”

Greg told us the two were great matches because the companies were running into roadblocks, such as staffing and remote workforce management issues, that JaguarPC had already overcome.

“I knew just how to solve those problems, so merging our companies was a giant leap forward for all of us,” Greg said.

JaguarPC has grown considerably during its 20-year history through acquisitions and by delivering top-notch hosting.

Still, building up JaguarPC to where it is today wasn’t easy.

“Combining the companies, platforms, and workforces was very difficult,” Greg said. “Eventually, we found the fastest way to move forward, learned which platforms worked best, and put ourselves in a situation where we could thrive.”

Greg’s Air Force experience came in handy when it was time to get funding. Wells Fargo had an SBA just for veterans. And that allowed Greg and his team to secure their first bit of funding.

“That let us really focus on the small business and the virtual private server markets,” he said. “It really turbocharged our growth.”

Greg told us his team worked diligently to create a robust infrastructure to provide his clients exceptional site performance and high uptime rates.

“When I first got into this business, all I had was one of those cobalt-style servers co-located with a local ISP,” he said.

But, when he moved to Houston, Greg decided it was time for a major upgrade.

“I had about 100 servers co-located in a rack,” he said. “Then, I made sure we had different locations — I didn’t want to have all of our eggs in one basket.”

Five years later, the 100 servers turned into over 2,000. To date, JaguarPC has deployed more than 35,000 servers worldwide. 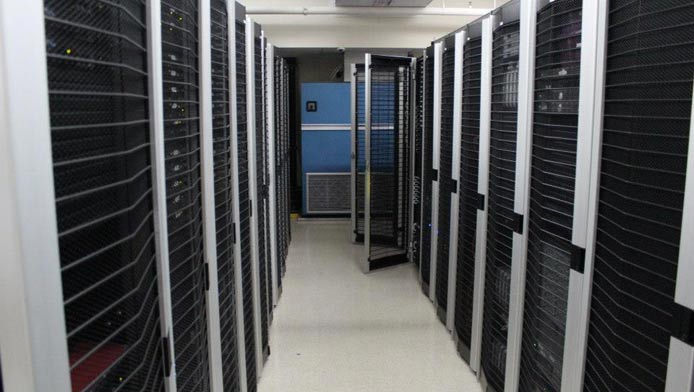 The key to JaguarPC’s success is its datacenters, which allow the host to boast 100% network uptime rates.

But things didn’t always go smoothly. The JaguarPC team discovered major issues with the power source at one of the company’s primary datacenters. To ensure customer sites kept running, all the company’s employees performed a full exodus, migrating entire racks of servers to a new location.

“It was a grueling experience,” Greg said. “We were up at 3 a.m., taking them down the road to a new facility, with a whole slew of people working 18-hour days over a period of three weeks.”

Although JaguarPC suffered through a hard month, the company ended up in a much better situation. Ultimately, the move was done to prevent downtime for JaguarPC customers and keep their online storefronts open for business.

“The datacenter space is critical to what we do,” Greg said. “It was important that we have control over that. If we didn’t, we couldn’t deliver on the SLAs that we had promised our customers. Today, we have very tight control over our physical equipment. We’re hands-on, and we’ve hired US-based staff to be our data center managers.”

And Greg told us the strategy has really paid off. JaguarPC is now able to guarantee 100% network uptime rates.

“That’s incredibly important for our customers because, if they’re offline, they really are losing money,” he said. “For eCommerce businesses, the cliché ‘time is money’ is literally true. And if anything ever does go wrong, JaguarPC will pay them for their downtime.”

Today, JaguarPC is expanding yet again. While continuing to offer its incredible range of hosting services, the company also delivers a turnkey web services package to its customers.

“We’ve developed partnerships with marketing and SEO companies,” Greg said. “They refer us to businesses that want to build their web presence or aren’t happy with their current website. Maybe their site isn’t designed well, maybe they have downtime issues, or maybe they don’t have all the power and resources they need to stay online and deliver their products.”

In addition to hosting, JaguarPC will offer packages that include SEO, marketing, and reputation management services.

“We have almost any available solution,” Greg said. “If we’re working with a small mom-and-pop shop, we can give them a cloud platform. If it’s a bigger company that wants more control, we’ll set them up with a virtual server. If they’re looking for something completely different, we can put together a hybrid cloud-server setup. We provide the hosting solution, as well as additional SEO and marketing services, reputation management, and all things website.”

Greg and his team have been perfecting the project for a long time, and they’re all set to launch in 2018.

Long before hosting was a crowded industry, JaguarPC was hard at work figuring out how to best serve the small business community’s web needs. And Greg’s just as committed to that mission as he was when he was in the Air Force and spending his nights and weekends building his business.

“We’ve been doing this for 20 years,” he said. “We know what makes a website successful. When we look at a site, we have the tools and the background to understand what’s going on and provide solutions that will make companies more successful and more profitable.”

Whether the company’s helping SMBs with its traditional hosting services or empowering emerging businesses to build online presence with its new turnkey web solutions package, JaguarPC is committed to the success of its clients.