TL; DR: The Fleksy virtual keyboard, owner of the Guinness World Record for texting speed, now helps users access apps by embedding them into its interface. That allows users to quickly select Fleksyapps while typing without switching screens or leaving the conversation. The platform also leverages AI through its Fleksynext Smart Assistant, which can predict and suggest apps, emojis, or other resources users will need as they type. Fleksy has a digital currency exchange system in the works and also built an online app marketplace. Those features make the platform a secure, private alternative for mobile users who want to communicate more — in less time.

In today’s mobile-centric world, texting has surpassed phone calls and emails as the most popular form of communication in the United States. And smartphone users in the U.S. spend a whopping 23 hours a week on their devices.

During all that time using mobile keyboards, many users also waste plenty of time switching between apps while texting to retrieve everything they want to include in a message. Whether those are links, videos, songs, emojis, or even payments, rounding them all up can seem like a chore.

That’s why Fleksy, a well-known virtual keyboard platform, introduced Fleksyapps to make texting more intuitive. Fleksyapps allows users to embed their favorite apps directly into the Fleksy smartphone keyboard, so they are quickly accessible during a conversation.

Fleksyapps is the latest addition to the Fleksy keyboard, which broke the Guinness World Record for fastest texting.

Stephane Dussart, Fleksy Head of Marketing, spoke with us about how the company revolutionizes virtual keyboards.

“Fleksy is the fastest keyboard in the world, and we launched Fleksyapps to become the fastest access to content anywhere the user is typing,” said Stephane Dussart, Fleksy Head of Marketing. “With users spending so much time messaging every day, we wanted to bring them a consistent cross-app experience.”

The Fleksy platform is available on Android and iOS in 110 countries and through mobile OEMs, including Samsung, Palm, and GMobi. It is built with a powerful and intuitive gesture system and includes auto-correction in more than 50 languages.

And, with more than 13 million downloads under its belt, Fleksy continues to focus on innovation — which includes support for exchanging digital currency.

According to research by Flurry, U.S. smartphone users devote 33% of their time on mobile devices dedicated to messaging via social media, text, or email each day.

At the same time, adults average more than 30 apps installed on their smartphones. Yet 80% of smartphone users may never actually use all of those apps. 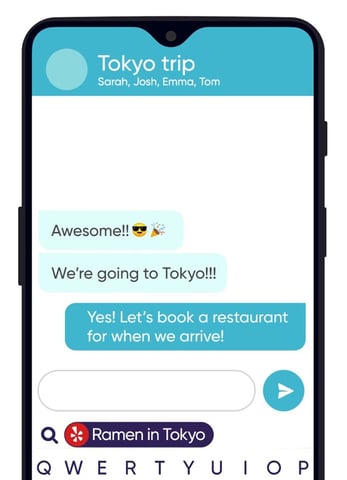 Fleksynext can predict apps and other content that users may need while they’re typing on Fleksy’s smart keyboard.

Switching back and forth between all of those apps can be cumbersome when users are in the middle of a conversation. But Fleksyapps appears at the top of the mobile keyboard, making it more natural to use while typing. Users can include Yelp, Skyscanner, GIPHY, and GifNote, among many others, as well as emojis, memes, GIFs, and stickers.

And Fleksy built the Fleksynext smart assistant using AI to predict and suggest apps users will need next as they type a message. It can dynamically recommend services and content such as restaurants, GIFs, music, videos, or even airline flights.

Keywords also trigger relevant apps depending on the details in a user’s profile.

For example, if a user discusses food often, the Fleksynext AI engine may suggest lunch at a nearby Japanese restaurant if sushi is mentioned in a conversation before noon.

“Users are demanding a smarter, more personalized typing experience, but also an interconnected typing experience,” said Stephane. “Thanks to our powerful Fleksynext AI engine, we can use the local resources of a device to predict what the user needs next.”

Fleksynext also respects and protects users’ privacy. The keyboard analyzes, detects, and predicts the services a user will need next anonymously within the device. That is possible because the AI is located on the device itself and leverages its powerful processing and memory resources rather than external servers.

No data goes to the cloud, and no one can access what users write. That keeps their identity and personal information secure in all Fleksyapps, and from other third-party intermediaries.

And the company continues to expand its robust app ecosystem. Earlier this year, Fleksy launched its own app store on the Android platform. It includes navigation, localization, ride-hailing, translation, weather, booking, and micropayment apps. While Fleksyapps is available on the keyboard by default, the Fleksyapp Store allows users to customize their experience even more by adding and removing apps.

And the Fleksyapp Store gives users the freedom to use any apps they want.

“Our core differentiation is neutrality and freedom to operate, a home for all brands, and respect for user privacy,” said Stephane. “The fundamental problem for app stores today is that they are saturated. And, while developers and brands spend thousands of hours building their apps, they end up with so few downloads that it’s harder to capture user attention. The Fleksyapp Store solves this by bringing brands and developers to where users spend most of their time: messaging.”

The company also introduced a token rewards system. Users can earn Fleksycoins by inviting friends to use the keyboard, earning badges, adding words to their dictionary, answering surveys, or posting about Fleksy on social media. While not a cryptocurrency, this in-app currency has monetary value and can be exchanged for new themes. In the future, Fleksycoins will serve as the primary exchange currency between brands and users in the Fleksyapp Store.

“We are capable of giving users what they need across all apps and bringing Fleksyapps everywhere they type across all platforms,” said Stephane. “Fleksy offers meta-access to all of digital life in a single, coherent package.”

Fleksy: On a Mission to Build the Future of Typing

To achieve its goal of becoming “the fastest access to content anywhere the user types,” Fleksy makes products that foster an intelligent, integrated keyboard experience. The Fleksyapp Store is continually adding new apps, and the company has even more innovations in mind.

While many people think of a keyboard as a means of typing, Fleksy sees it as a gateway to new opportunities.

“We’re building the future of typing,” said Stephane. “We have some very exciting things coming, including a new dictionary-less typing experience powered by AI.”

According to Stephane, Fleksy’s main challenge is other companies trying to copy the keyboard’s innovations and ride its coattails to success. But he said that also motivates the company to continue building the “next big thing” that will lead the market.

And the company finds those new opportunities by combining its own ideas with feedback from users.

“Our design expertise brings users new ideas like Fleksyapps in a neat package,” said Stephane. “Now, we often receive feedback from our users suddenly imagining a lot of new Fleksyapps that could help them daily. That is where the other 50% comes in. Once we have created the innovation, we listen to what users tell us.”