Useful for creating everything from web applications to video games, Microsoft’s .NET framework enables developers to use their preferred programming language without fear or compatibility issues. For those developing dynamic websites and working in ASP.NET, finding a high-powered web hosting service can be challenging in a Linux-dominated market.

That’s why Takeshi Eto and the team behind Everleap continue to create modern platforms that serve ASP.NET developers. They got their start with DiscountASP.NET, launched roughly a year after ASP.NET was released in 2002. As one of the earliest companies to include ASP.NET hosting, DiscountASP.NET offered Microsoft-powered services such as MSSQL database management and IIS.

“Back then, there were no commercial hosting automation systems that were programmed in ASP.NET, so we built our own,” he said. “We felt that building our own hosting system in ASP.NET was a great way to demonstrate our expertise in ASP.NET.”

The team continued to innovate with ASP.NET, eventually launching Everleap in 2014 to exclusively offer cloud hosting services aimed at helping customers scale their online operations. Balancing a site’s load across multiple servers means consistently high performance with no additional setup or need for file migration, according to Takeshi.

Easing the Transition to Cloud Hosting

With more than 15 years of ASP.NET experience, the Everleap team takes the performance and stability benefits of cloud technology and combines them with the simplicity and familiarity of the more common shared hosting space.

“We try to make the transition to the cloud a lot easier,” Takeshi said. “Unlike the à la carte features of public clouds, we offer bundled services with our hosting plans.”

Takeshi Eto serves as President and Vice President of Marketing for Everleap, which is based in Los Angeles.

While competing cloud providers often charge separate fees for various services, Everleap includes all the bells and whistles, from disk space and bandwidth to SQL reporting and DNS support. This provides a similar setup to shared hosting packages that are often sold as all-in-one packages.

Other benefits of Everleap’s cloud service include predictable billing cycles as well as extensive, personalized tech support. Customers are charged a flat monthly rate for services, rather than being billed per minute or resource consumed. Everleap is powered by the same technology as Microsoft Azure, but acts as a cheaper and more user-friendly option for those curious about the cloud.

“Our customers know exactly how much they are paying, as opposed to finding out what they owe at the end of the month,” Takeshi said. “At Azure, you can post questions in the forums or tweet for free, but if you want to send an email or have a phone call, you have to pay for a support plan.”

Cloud Solutions Based on Customer Challenges and Feedback

The elasticity of a cloud enables customers to quickly grow a business and meet mounting traffic demands — but if an app wasn’t programmed to run across multiple servers, moving to the cloud can be challenging. Fortunately, Everleap support teams work closely with customers to find the most appropriate configurations.

Given ASP.NET’s versatility — and Everleap’s extensive expertise — the migration is painless, Takeshi said. Everleap serves a broad customer base that consists of clients looking for professional cloud hosting without the common headaches.

Everleap emphasizes simplicity and transparency in its custom control panel.

“With so much rapid change, your business has to be agile and flexible,” he said. “Any website that has outgrown shared hosting would benefit from Everleap, while any public cloud user that wants more predictable costs, ease of use, and technical support can consider Everleap.”

With customers’ needs at the forefront, Takeshi told us Everleap’s development process relies heavily on external input. Customers are encouraged to submit feedback, questions, and suggestions through the company’s proprietary control panel.

“We keep track of customer feedback, feature suggestions, and requests,” Takeshi said. “During our product meetings, we’ll take a look at all the potential enhancements and hash out what projects we’ll work on for the quarter.”

Going Beyond Traditional Hosting with Seamless Scaling and More

Everleap’s custom control panel serves the company’s single-site and multi-site hosting packages. For either plan, each website is allotted two load-balanced servers, as well as e-mail, SSL support, FTP, and other features. The company guarantees 100% uptime via fault-tolerant hardware and clustering.

“If a server goes down for any reason, the site is automatically spawned on another server,” Takeshi said. “This is a huge improvement from traditional hosting, where an issue with the server or even a maintenance reboot could take down all the sites on the server.” 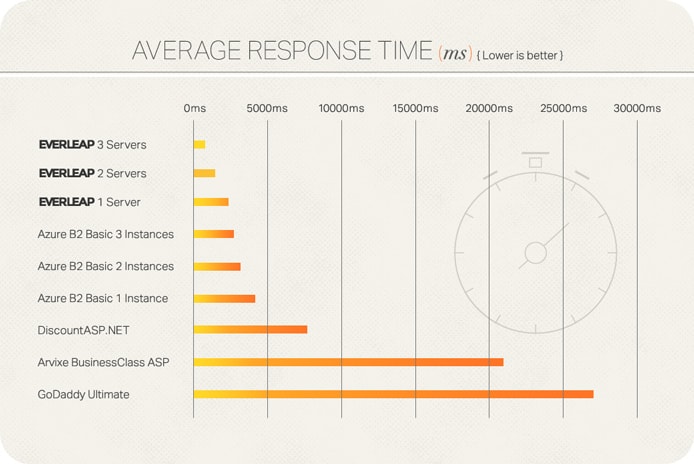 Customers can run self-contained ASP.NET Core applications on either plan and can find detailed conversion instructions if the applications are framework-dependent. Additional resources and servers are also available for those looking to scale to more servers.

“If a site is sluggish because it became popular, we can distribute the load across multiple servers with a few clicks,” Takeshi said. “There’s no website file migration or additional setup required — it happens seamlessly.”

Up Next: Expanding IT Infrastructure with Enhanced Services

According to Takeshi, Everleap aims to grow alongside customers by further improving the cloud experience. Currently, the company offers managed services and seamless scaling to its largest clients. For customers with special IT needs, the company has sometimes taken on private cloud hosting projects to accommodate their needs.

As this portion of the customer base continues to grow, Takeshi told us that Everleap plans to implement more services both inside and outside its own platform. Possibilities include setting up hybrid clouds, configuring custom IaaS, and outsourcing database hosting and DBA services.