By: Laura Bernheim Posted: September 7, 2016
Follow "The Hosting Blog" daily as hosting experts, programmers, and tech managers go in depth on a variety of tech-related topics.

TL; DR: DreamHost has long been in the business of providing powerful hosting plans and infrastructure tailored to customers’ needs, so it shouldn’t be surprising that their managed WordPress offering, DreamPress, provides advanced features, such as high performance, automatic updates and backups, 100% uptime, premium security, and unlimited bandwidth — all at an affordable price. The term “managed” actually means something to DreamHost, who gives DreamPress customers an incredible level of speed, security, and scalability. Born out of conversations with customers, DreamPress boasts a roster of features that impresses even WordPress.

Even before he worked at DreamHost, Director of Product Mark Calkins was intrigued by the idea of “breaking down” the ability to offer redundancy, multi-datacenter support, and other enterprise-level services to offer them to small businesses in a more attainable and affordable package.

“The cost point for those kinds of capabilities is extremely high,” he said. “We think we can bring the price of that way down.”

A company steeped in open-source technology, DreamHost has turned their attention to their shared WordPress hosting services. The incredibly popular content management system can be hard for beginners to learn and challenging for developers to run at optimal performance.

DreamHost’s answer is DreamPress — a managed WordPress hosting solution launched in 2013 that offers speed, scaling, security, and support for a very reasonable $16.95 per month. The DreamPress team takes care of identifying and developing various settings and plugins that streamline the WordPress installation, databases, and server operations.

In the web hosting industry since 1997, DreamHost has long established themselves as a customer-driven provider that caters to developers and small businesses alike.

With DreamHost built on their Founders’ love of open-source programs, it came as little surprise that their customers tend to use the galaxy’s largest open-source CMS, WordPress.

With 800,000 WordPress Installs, DreamHost Asked How They Could Improve

Somewhere along the way, the team at DreamHost began to take stock of just how many sites were using WordPress. They knew the number would be high — but not as high as the 800,000 WordPress installs they discovered.

DreamHost reached out and interviewed several clients to make sure their needs were being met.

“We found that a lot of them just don’t want to have to deal with installing special plugins and then tuning them to work perfectly with their site,” he said. “They just want to get it up and running so they can focus on their content and less on the nuances of WordPress or hosting WordPress.”

Beyond their customers, DreamHost themselves are heavily immersed in the world of WordPress.

Senior Developer and Platform Lead Mike Schroder regularly contributes to WordPress Core and even led the April 2016 release of version 4.5.

Both are popular speakers on the WordCamp circuit, each presenting at eight to 10 of the gatherings a year. DreamHost sponsors all WordCamps in North America and Canada.

The myriad of features in DreamPress keep users’ sites secure, fast, and performing at their peak. In addition to easy setup and 24/7 WordPress-specific support, DreamPress comes with:

The Let’s Encrypt SSL certificates, added in August 2016, provide the required security and encryption for eCommerce sites as well as a boost in search engine rankings, according to Mark.

In addition to easy backups, all new installations of DreamPress come with Let’s Encrypt SSL certificates.

“Everybody will have out-of-the-box support for HTTPS,” he said. “In fact, we actually added NGINX as a reverse proxy for Apache, and HTTP2 support with that, as well.”

In addition to 2-factor authentication for their control panel, DreamHost datacenters include massive DDoS protection.

“Those things are expensive, so your small hosts can’t really afford them,” Mark said. “You won’t need to add a whole bunch of security plugins. We do a lot of that protection for you.”

When DreamHost asked their customers what they would like from WordPress hosting, speed was a major priority. Now with three layers of caching, DreamPress zips right along.

Developers tested a bunch of hosting products in the $15-$30/month market in which DreamPress resides, and “we pretty much blow the doors off with our products,” Mark said.

DreamPress achieves this with Varnish and a plugin (created by Half-Elf Support Rogue Mika) that purges the cache when content is created or modified. They also use Memcache to minimize the impact on databases, along with OPcache for PHP 5.6.

Instead of slogging through technical support representatives until you find someone who can actually help, DreamHost trains all their support agents to Tier II before they work with customers.

“A lot of places typically either have sales people as support agents, or they have junior tech support people who aren’t very knowledgeable about solving customer issues,” he said. “When you go into DreamHost technical support, though, you’re getting a Tier II person from the start.” 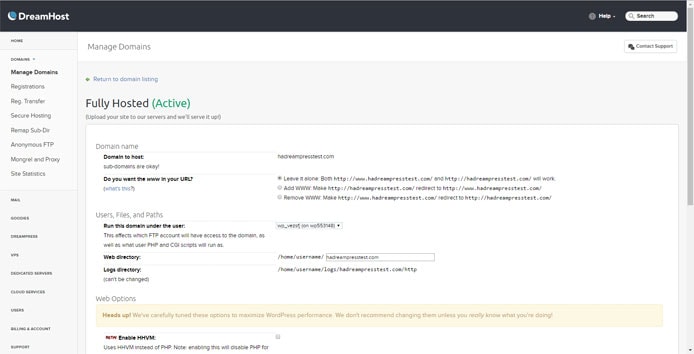 DreamPress tells users that settings are carefully tuned to maximize performance. Change them if you dare.

What’s more, any customers who contact DreamHost support get routed to a team called the “WordPress Ninjas” who support DreamPress, Mark said.

“These are people who are really, really knowledgeable about WordPress,” Mark said. “They have representation in all of our product meetings. Anytime there’s something brand new, they’ve known about it since the time we started working on it. They’re ready to support everything, even brand-new features.”

DreamPress has a dedicated dev team working to add a customer-requested component — a staging environment — that Mark said will take into account potential copy-to-live issues.

“Staging is not a trivial feature because you can really mess things up pretty easily,” he said. “Even some of the good staging implementations among our competitors still have problems. I don’t want to criticize them, but there are a couple of edge cases where you can still break a site.”

Having a safe environment in which to test themes and plugins is critical for higher-end WordPress users, Mark said, pointing out that in addition to an ultra-stable platform, DreamPress developers will give users plenty of options to choose what goes into staging and what gets pushed to the live site.

Even WordPress is impressed with all the work DreamHost has done to provide the best possible hosting experience. In the spring, WordPress.org added DreamHost to their list of four recommended hosts.

The team behind DreamPress is continuing to churn out features for their customers.

Mark attributes that accomplishment, in part, to the automatic updates DreamPress performs for users. When WordPress 4.6 debuted, DreamPress updated about 800,000 sites in one day.

“There are not many other companies that can do that,” he said. “I think that’s one of the reasons we got on the recommended hosting list because we’re really willing to go the extra mile to keep our customers up to date.”

Get Started with DreamPress Today