By: Christine Preusler Posted: November 10, 2020
Follow "The Hosting Blog" daily as hosting experts, programmers, and tech managers go in depth on a variety of tech-related topics.

TL; DR: Discourse has helped users host, build, and customize civilized online communities since its founding in 2013. The company’s latest release, Discourse for Teams, offers tools for facilitating asynchronous communication and teamwork. Whether using the platform as a mailing list, discussion forum, or long-form chat room, communities can count on Discourse’s tools to help them reimagine online communication and collaboration.

Over the past three decades, the internet has opened the floodgates of communication — while simultaneously unleashing unique etiquette challenges.

Case in point: the internet troll, an online inhabitant known for intentionally upsetting others by posting disruptive comments. Like their mythological counterparts, these creatures are so grotesque that they take part in trolling for no reason other than their own amusement.

But a fairytale ending to this saga may still be possible thanks to open-source innovations like Discourse. The online platform, created in part by Stack Overflow Co-Founder Jeff Atwood in 2013, provides a forum for civilized conversation.

“Jeff’s dream was to encourage healthy discussion on the internet at a time when such behavior wasn’t exactly common,” said Sarah Hawk (known simply as Hawk), Vice President of Community at Discourse. “The key was to create software that prompted people to conduct themselves in a healthy manner and be more mindful of their reactions.”

Discourse’s rules of civilized discourse and trust-based flagging systems help communities build up an immunity against trolls, spammers, and other malicious actors. At the same time, positive behaviors are encouraged with badges and likes.

Once installed, Discourse includes all the functionality users would expect from a modern social media platform, such as the ability to mention someone by a username, quote and link to replies and topics, and reply via email or through the platform.

Jeff Atwood, Sam Saffron, and Robin Ward may have founded Discourse just seven years ago, but the company is now a fast-growing team of more than 44 people. The entirely remote company now spans 17 countries and 14 time zones.

Early on, the company focused on getting large companies to run its beta software on their sites in exchange for free support and hosting. Hawk said she first came across the Discourse platform while managing SitePoint Forums, a web development and design community. “We beta-tested Discourse, and it was hugely successful for us,” she said. “I went on to migrate a number of other successful communities onto Discourse.” 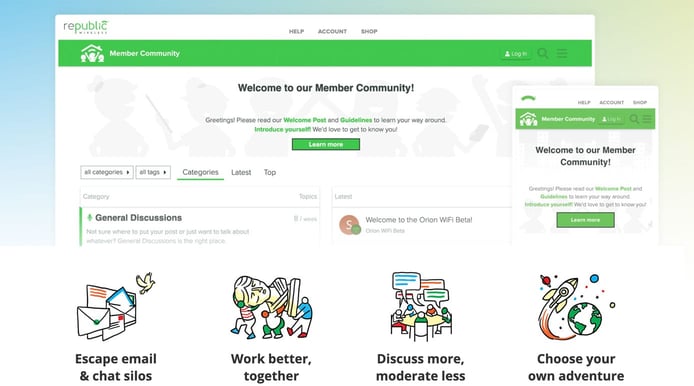 No matter what you’re hoping to achieve, the company makes it easy to form supportive member communities.

“We are a hosting company,” Hawk said. “Discourse, the product that we host and develop, is 100% open-source. So we make our money hosting Discourse, but we spend most of our time writing it.”

“All of our growth has been 100% organic,” Hawk said. “The product really sells itself, so we’ve been pretty fortunate in that regard.”

In using Discourse internally over the years, the fully remote team at CDCK discovered that the tool worked well for asynchronous communication and teamwork. Now, CDCK is extending those benefits to the marketplace with Discourse for Teams, released in October 2020.

The affordably priced, privacy-focused software was built using Discourse with closed-source customizations. It comes pre-configured with special tools for teamwork, productivity, and internal discussion among remote teams and is priced for small to medium-sized teams ($20 a month for up to five team members, plus $6.67 per month for additional members).

“Discourse for Teams is priced for instances that support somewhere between five and 200 users, as opposed to a community site which could be tens of thousands of users,” Hawk said. “As opposed to something like Slack, it provides asynchronous conversation that is more sustainable. You don’t lose all of your discussions and conversations — you have that depth of recorded knowledge that is not quite so fleeting.”

The product is poised to help teams worldwide streamline the remote workflows that many businesses are still grappling with.

“Discourse for Teams uses Discourse as a base, but we’ve curated and reframed it to help other organizations to be able to work asynchronously in this newly remote, COVID-era world,” Hawk said. “We have been planning on doing this for the last three years, but the timing couldn’t have been any more convenient for our customers.”

CDCK team members are strict proponents of the dog food philosophy, which many describe as eating your own dog food, or using your own products internally. To that end, the company employs both private and public instances of Discourse used for customer support, internal planning, and general discussion.

“That is part of the reason for our success. We dogfood everything — heavily,” Hawk said. “And, in addition to Jeff’s greater vision for the product, he has an amazing sense of what should and shouldn’t go into it.”

Discourse follows the rule of three: If three people ask for the same feature or can’t figure something out, then the software must be changed.

Hawk told us that the team considers any installation of Discourse a win — including cases where users choose to host the open-source version on CDCK’s servers, those where customers opt for self-hosting, and the closed-source Discourse for Teams.

“The value proposition is that there really is something for everyone,” she said. “We believe that every instance of Discourse out there ultimately results in valuable feedback, so it’s in our interest to make Discourse available to everyone across the spectrum.”

Hawk herself manages a team of 16 tech experts who are responsible for supporting the company’s hosted customers.

“The rest of the organization is made up of engineers supporting and writing the product. So the model works well in that everything that we think is beneficial to the wider open-source audience goes into the core product. And anything that makes sense specifically for our hosted customers goes into a plugin.”

Via its Marketplace, Discourse also supports an ecosystem of third-party micro-businesses available to help self-hosters achieve their goals. Some companies help Discourse users get set up with self-hosting options and migrations, while others create custom plugins.

“We don’t offer professional services to self-hosters; obviously, that would not be a sustainable business model,” Hawk said. “We only offer them to our hosted customers.”

Allowing third-party vendors into the Discourse ecosystem creates another channel for valuable feedback while enhancing the community knowledge base. “The community documentation is kept up to date by a ton of people who aren’t on our team, which is obviously super valuable for our paid customers as well.”

Working Toward a Greater Good

Hawk told us her favorite aspect of Discourse is that the product empowers users to create the kind of culture they want.

“We don’t come in and say, ‘This is how you need to use our product, this is how your community needs to run,’” she said. “We say, ‘Here are a range of tools that you can deploy or not based on your use case and the kind of culture that you want to see.”

“Obviously, we’re working to make money, but we feel like we are building a healthy community of people who love the product,” she said. “And the open-source nature means that the community helps us shape what the product looks like.”