Online security is paramount to a website’s success, and understanding the difference between TLS vs. SSL is another step in protecting your sensitive data.

You’ve heard the buzzwords: online privacy, cybercrime, malware, phishing, DDoS attacks, and so on. An essential component to shielding yourself and your site against these security vulnerabilities is the end-to-end encryption of the communication data between computers and web servers.

We live in an increasingly digitally connected world, where the Transport Layer Security (TLS) network protocol is of the utmost importance to safeguarding folks from digital harm. The TLS protocol is used by the HTTPS protocol (among others) to encrypt and authenticate the computers involved in any communication on the web. So, where do we begin? Let’s peer into the world of TLS, SSL, and HTTPS certificates.

In the past, getting a certificate was often complicated for website owners. Hosting providers spent inordinate amounts of time integrating different tools and administering manual processes into their businesses. And the cost of a certificate was sometimes a prohibitive factor for smaller and/or non-commercial web property owners.

In 2014, a group of companies and nonprofit organizations, including the Electronic Frontier Foundation, Mozilla, Cisco, and Akamai, announced Let’s Encrypt – a free, automated, and open Certificate Authority. This project has shown to be groundbreaking in terms of the number of Domain Validated certificates being used nowadays. Find more on their Automatic Certificate Management Environment (ACME) tools and how to get started here.

In 2016, Symantec started its Encryption Everywhere initiative aimed at ensuring every legitimate website is secure by 2018 using a hassle-free certificate process.

Symantec’s program helps web hosting partners offer basic encryption at no added cost to the hosting customer. Symantec provides basic certificates to hosts, who can, in turn, provide fully integrated SSL encryption to any new or renewing customer (through their cPanel interface).

So, in these days of free certificates, lower-cost industrial-grade certificates, and much better certificate management tools, there are fewer arguments against using HTTPS as a site owner. Here are the top-recommended hosting providers with free SSL certificates:

Ryan Frankel (HostingAdvice.com): If you’re looking for an affordable host, Bluehost is a solid, reputable choice; The company's low costs, coupled with its supremacy in the shared hosting arena, is what makes this provider such a valuable deal. The Bluehost name is listed toward the top of many of our reviews categories, and with good reason. Go to full review »

PJ Fancher (HostingAdvice.com): Whether you're a first-time website owner or a web veteran, iPage’s excellent hosting services and a fantastic list of extras make the brand one of the best values in web hosting. Unlimited disk space, bandwidth, and emails are just a part of what makes iPage’s shared hosting plans a great deal. Go to full review »

PJ Fancher (HostingAdvice.com): InMotion Hosting offers an excellent business-class shared hosting plan. While carrying a higher price tag than some other cheap hosts, it has a very nice list of features to help justify the extra cost. Go to full review »

2. TLS Is the Modern Encryption Standard (SSL is Older)

In a nutshell: TLS is the encryption everyone uses these days. SSL is antiquated. When people say SSL, they mean TLS!

Transport Layer Security and Secure Sockets Layer (SSL) are both network protocols that allow data to be transferred privately and securely between a web server and a web browser.

TLS establishes an encrypted, bidirectional network tunnel for arbitrary data to travel between two hosts. TLS is most often used in conjunction with other Internet protocols such as HTTPS, SSH, FTPS, and secure email. 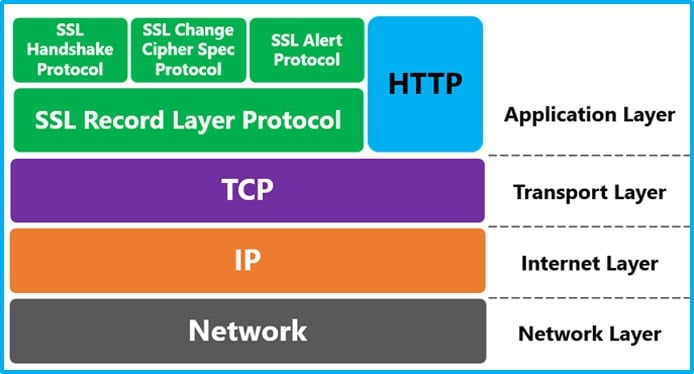 TLS/SSL consists of two layers within the application layer of the Internet Protocol Suite (TCP/IP).

In 1999, TLS replaced the older SSL protocol as the encryption most everyone uses. This change was made mostly to avoid legal issues with the Netscape company, which created SSL, so that the protocol could be developed as an open standard, free for all.

HTTPS is the HTTP protocol embedded within the TLS protocol. HTTP takes care of all the web surfing mechanics, and TLS takes care of encrypting the data sent over the network and verifying the identity of the server host using a certificate.

More and more web servers are also going HTTPS-only, not just for security reasons, but for other practical arguments:

It may increase your search engine ranking, too, though this has yet to be confirmed by Google.

3. Differences Between the SSL, SSL v3, and TLS Protocols

Several versions of SSL and TLS have been released over the years:

Most applications, such as browsers, are compatible with some of the older SSL protocol versions, too, although SSL is slowly being phased out in favor of the better TLS security.

Benefits abound for those using encryption to protect their site’s (and customers’) sensitive data. This is especially true of eCommerce and healthcare-related sites.

Your site’s traffic benefits from TLS security in two ways:

The importance of these pros can’t be overstated — especially for eCommerce sites that depend on getting and retaining user trust for sales.

As great as it sounds, TLS has a few drawbacks:

As for the performance of the whole connection, MaxCDN concluded: “Encryption does add a step in the initial connection process. The overhead for ongoing connections is negligible when compared to unencrypted connections.”

With the upcoming HTTP/2 standard, setting up a TLS connection will be significantly faster, due to its parallel design (fewer network round trips required for data exchanges).

Additionally, although the HTTP/2 standard itself does not require the use of encryption, most client implementations (Firefox, Chrome, Safari, Opera, IE, Edge) have said they will only support HTTP/2 over TLS, which makes encryption de facto mandatory.

As of late, the entire web seems to be trending toward HTTPS. Certificates can be requested from Certificate Authorities, of which there are many providers. Read up on the various certificate options available in our article on choosing an SSL certificate, or read on as we briefly cover the three main types below.

EV certificates come with the green address bar — a recognized symbol of trust on the Internet. EV certificates are the premier TLS certificates. Sites for which security and consumer trust are essentials, such as large eCommerce sites, should seriously consider an EV cert.

Websites with EV certificates tout the green bar of trust in the browser address bar.

These certificates are, however, the most expensive because an extended organizational verification process is done based on these issuing criteria.

OV certificates do not come with the green address bar but activate a number of browser trust indicators. An OV certificate requires a business be verified by the Certificate Authority. The organization’s name will be listed on the certificate, which reinforces the trust.

OVs are used by corporations, governments, and other entities that want to provide an extra layer of confidence to their visitors. OV certificates are especially important for eCommerce websites if an EV certificate is unattainable for whatever reason.

DV certificates offer industry-standard encryption (at the same level as the other certificate types), but not much else. Aside from its low (or even free) cost, another benefit of a Domain Validated (DV) certificate is it can be issued in mere minutes because the Certificate Authority only has to validate that you own the domain you wish to secure — which is often an automated process.

Now that you know what is required to secure your site using HTTPS, the TLS certificate options available, and the trust expectations of Internet users, you’re free to start implementing encryption best practices on your own site.

Websites increasingly need SSL security, as browsers and search engines continue to ramp up the penalties for unsafe sites. Visitors are far less likely to visit or provide payment or contact information if they see their data won’t be secure.

Head over to The SSL Store, an excellent partner in this somewhat bewildering world of web certificates and security acronyms. They will deliver friendly, security-qualified, and 24/7 customer support — not to be outdone by the best web hosts out there.

A Beginner's Guide to Setting Up Web Hosting — Domains to Design

How Does JustHost Compare With the Top WordPress Hosts?