TL; DR: Led by a league of superhero mascots, WPMU DEV plugins help WordPress site managers optimize, protect, and improve several websites at once. The company’s tools focus on usability and efficiency when identifying opportunities for advancement. More than 600,000 developers and agencies rely on performance, security, and support from WPMU DEV, which aims to return the favor within the open-source community.

As an English literature graduate and university lecturer in education design, James Farmer didn’t know PHP from FTP — but he saw potential in WordPress MU, now known as Multisite.

Not much has changed in more than 10 years; even though James now runs a leading WordPress plugin and development shop in WPMU DEV, longtime employee Joshua Dailey said James still can’t code.

“It’s really interesting, but he’s not a developer,” he said. “He can dabble a little, but he needs everything we make to work in one click, right out of the box.”

With the Co-Founder and CEO established as it’s target audience, WPMU DEV provides a user-friendly toolkit for optimizing all things WordPress: security, performance, design, SEO, updates, backups, eCommerce, marketing, publishing, and community interaction. Nearly 620,000 members enjoy access to more than 120 plugins and themes, in addition to more than 1 million users benefiting from the free versions of the company’s plugins.

“We’re really trying to figure out ways to benefit the WordPress community because it’s given so much to us as a company,” said Joshua, WPMU DEV’s Sales Copy and Content Marketer. “There’s a tight community dynamic that we’ve taken seriously as a growing business.”

The Hub acts as a nerve center for WPMU DEV members’ WordPress experience. Particularly useful for those managing multiple websites, The Hub provides a centralized interface for administrators to efficiently manage, update, monitor, and scan websites. Users can install and configure WPMU DEV plugins and reach out for the company’s 24/7 support. 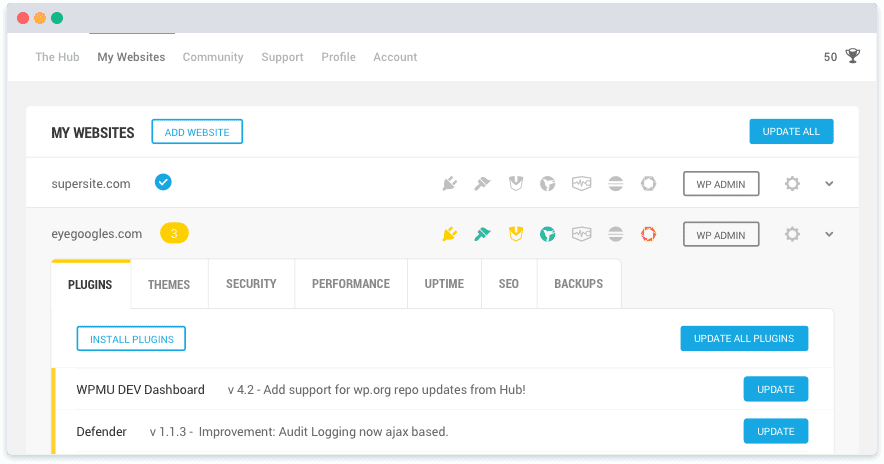 The Hub offers a centralized access point for more than 100 WPMU plugins that can be managed across multiple sites.

Besides adding and improving WordPress functionality, WPMU DEV assists site owners with responsive, customizable theme design. The Upfront theme framework, for example, comes with eight starter themes that can be adjusted with drag-and-drop precision. For those who want to strike their own path, the Upfront Builder enables users to design, build, export, share, and sell WordPress themes without having to write code.

Because of the membership pricing structure, the WPMU DEV suite of tools most resonates with developers and agencies who oversee multiple websites.

“You pay one price no matter how big you scale,” Joshua said. “We’ve found that users could be the consummate professional at the top of the heap, but they can also be someone whose friends keep asking them to make websites. WPMU DEV brings everything under one roof.”

“It’s a massive time saver,” Joshua said. “You get feedback on how to properly set those things up and make those tweaks. You can then export and import all those settings into any of your sites, so it consolidates all of that work for you.”

Next up for WPMU DEV, according to Joshua, is a reporting feature that will automatically send members and their clients a white-labeled document about the various optimizations made, attacks thwarted, and uptime achieved.

Although James and WordPress leaders had a rocky relationship in the early years of WPMU DEV, Joshua said the company has gone through a massive culture shift to emphasize contributing back to the open-source WordPress community.

“We want to be involved as much as possible,” he said, remembering a few years ago when WordPress leaders asked companies to donate 5% of their time to developing, contributing to, and supporting WordPress Core. “We were one of the first companies to sign on to doing that.”

Joshua Dailey, Sales Copy and Content Marketer, has been with WPMU DEV for more than five years.

Additionally, WPMU DEV and Joshua regularly vouch for the security of WordPress, which is commonly targeted as one of the platform’s biggest weaknesses and barriers to adoption.

“Right at the beginning, there was some big exploit, so now everyone associates WordPress as insecure or unstable,” Joshua said. “Really, WordPress Core hasn’t been hacked in years.”

“That’s why our WP Defender and things like Automate and all of the products that we’re trying to develop help mitigate those kinds of problems,” he said, alluding to the automatic updates and vulnerability scans. “Security is always going to be a big deal. Services like this become super important, and we try to eliminate as much user error as we can.”

Even though the WPMU DEV team is distributed around the world, Joshua said he enjoys working closely with people who care so deeply about what they do.

“If people aren’t excited about their work, it’s easy to get frustrated,” he said. “The work itself is really important to me as an individual and to be around individuals who really care about WordPress, development, and customer support is one of the best parts of working with this group of people.”

Joshua credits WPMU DEV’s support team for being a major element of the company’s success. The staff manning the live chat support feature received a 97% satisfaction rating from customers; the accounts team earned a 98% rating. In addition to user forums, WPMU DEV offers 24/7 live chat support on all things WordPress.

“It’s not just our products,” he said. “A lot of times, somebody will come to us with a product they’ve purchased elsewhere, and they need to figure out how to make it play nicely with the rest of their site. We’ll help troubleshoot anything and figure it out.”