By: PJ Fancher Updated: May 11, 2016
Follow "The Hosting Blog" daily as hosting experts, programmers, and tech managers go in depth on a variety of tech-related topics.
Email

TL; DR: Bluehost is known for its usability and customer focus, but it turns out that a user-friendly environment starts with an awesome work environment. We got a chance to meet with the Bluehost team. With heavily-involved leadership, well-supported employees, and a constant focus on expanding the options available to their customers, Bluehost knows the key to creating a better hosting experience.

Your ears should perk up when you hear a story of a web host (or any company) that began with the higher-ups getting down in the trenches, handling technical support requests personally, to ensure that each ticket was treated properly and each customer was treated like a priority. It’s a tell-tale sign of leadership that knows how to support people — treating them like individuals, not individual ticket numbers.

That’s the kind of leadership that Bluehost, a popular name in hosting, was founded upon. It’s inspired a company culture that we felt was well worth getting to know. We got a chance to meet with several of the team members of Bluehost to hear how this all-star web host is doing things differently, not only for their customers, but for their employees.

A consensus among the team members we spoke with was centered around the overwhelming support they feel from their shared employer. “I always feel like I’m going to be taken care of,” said Saralyn, who’s been with the company for approximately five years. Bluehost provides opportunities, security, and a fun work environment for their team and that translates into a company culture that encourages sharing that support with customers. 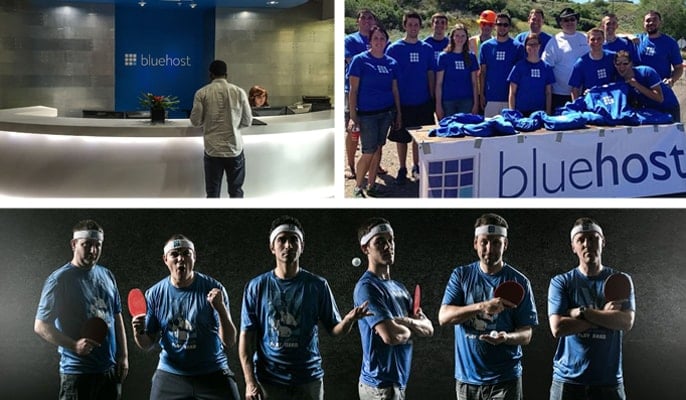 The BlueHost team described their work environment and how that’s better equipped them to help BlueHost customers.

Bluehost encourages their employees to grow and aspire to be leaders on the Web and in life. They do so by bringing in outside help — featuring CEOs, guest lecturers, and other voices of influence who have noteworthy stories to tell. “They do training and inspire us with the stories of their accomplishments,” Saralyn said, “and that’s pretty cool.” Guests of honor have included the CEO of Skull Candy and Olympic medalist Jimmy Shea.

Another way Bluehost stands out is through the office environment that they’ve built for their team. This includes free snacks, a gym, numerous on-site amenities, and an all-around “family” vibe. “I know it’s a company and a business, but it feels like a family in a lot of ways,” said Spencer, who’s been with Bluehost for just under a year. “The support guys, the marketing guys, and the sales guys — we all get along really well.”

The team members we spoke with agreed that by Bluehost spreading their support equally among employees and customers, they’ve created a “multi-dimensional” support approach to web hosting. The folks who started Bluehost in 2003 paid equal attention to meeting the needs of both parties and it’s resulted in a better hosting experience all around.

Direct Support from the Bluehost Founders and Leadership

Bluehost began with a handful of folks at the helm: Founder Matt Heaton, former-CEO Daniel Handy, Danny Ashworth, and a few key developers. “They wanted to build a company that helped everybody have an existence online and have everything that they need in terms of support,” said Alfred, who, like Saralyn, has been a Bluehost team member for about five years.

Technical support would be a key component to fulfilling that goal they had for their future customers, so Matt and Daniel wanted to be very involved. “One of the things they took pride in from the start was technical support,” Spencer said. “If anything went wrong on a support call, Daniel would go talk to the customer personally.”

“MVP” Appreciation from the Bluehost Staff

Bluehost team members hold customers in the highest regard. Another team member, Terrell made the following analogy: “In sports, the athletes are usually worshiped, but what most atheletes don’t realize is that the fans are the reason they exist. We exist because of our customers, so we want to make them feel appreciated and know that we’re sincerely grateful for all that they’ve invested in us.” Spencer added, “It’s a two-way street. They help us and we help them help their business.” Bluehost employees know the value of being a part of a team — and they consider their customers to be their MVPs.

What We Can Expect to See from Bluehost in 2016

Since 2003, Bluehost has grown from a couple of tech support aficionados to an army of nearly 800 team members. “We’re growing every day,” Alfred said. In 2016, you can expect continued growth — in size, in support emphasis, and in hosting offerings. As well-known WordPress fans, the Bluehost dev folks will continue to expand upon their WordPress-friendly product; meanwhile, they’ve come out with a new cloud product as well.

An obvious mission for Bluehost in 2016 will be creating more options for WordPress users. “We’ve always had an awesome relationship with the founder of WordPress, so we make sure that WordPress runs the best on Bluehost,” Alfred said. He and the rest of the team assured us that folks looking for WordPress hosting in 2016 should look no further than Bluehost. “No matter what you want or what budget you have, you’ll start your website and we’ll take care of you from there,” Alfred said. 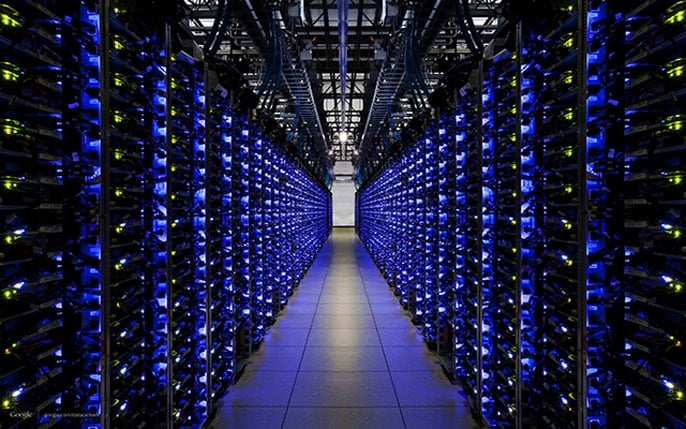 BlueHost is excited about new innovations for 2016, including WordPress enhancements and a new cloud server product.

Bluehost currently has at least two developers completely dedicated to supporting the WordPress.org community and Bluehost sponsors events in support of WordPress regularly. As Bluehost continues to invest more and more in WordPress customers in 2016, Alfred told us they have several plans in the works, including developing new dashboards to help streamline the plugin update process for users.

Kicking off the new year strong on the technical side, Bluehost recently released a new cloud product. The Cloud is known for its promise of scalability. This new Bluehost offering is ideal for users who may be new to owning a website but have high aspirations for scaling their business. It comes with the easy-to-use cPanel control panel, plus all the backing of the Bluehost support technicians. “We haven’t run tests yet, but judging by the feedback from the customers that are currently using the product, users are loving it so far,” Alfred said.

Final Thoughts From the Bluehost Team

Bluehost is well-known in the shared hosting space, offers exceptional services for all server needs (e.g., VPS, dedicated, or the new cloud product), and has received our high praise for the usability of their products. All of this couldn’t be done without a passionate team and Bluehost has clearly poured the right resources into ensuring that their team members are better able to help their customers. “We’re always looking to improve the customer experience,” Spencer concluded. “That’s our focus: making sure those little things are taken care of.”