By: Christine Preusler Posted: July 9, 2020
Follow "The Hosting Blog" daily as hosting experts, programmers, and tech managers go in depth on a variety of tech-related topics.

TL; DR: Virtual reality (VR) has long been touted for its promise in the gaming industry — but that’s not where its story ends. VRgineers is bringing the immersive technology to the professional space with XTAL, a high-resolution professional VR headset designed to transform the way we work. Today, the company is helping enterprises of all kinds perform simulations, improve training, and create visual prototypes by leveraging the ever-increasing power of VR.

In recent years, virtual reality (VR) has allowed gamers to lose themselves in some of the most immersive digital fantasies one can imagine — from the rhythmic, glowing halls of Beat Saber to the dystopian sci-fi setting featured in Half-Life: Alyx.

But the technology has also come into its own for its serious potential in the business world, where it allows for virtual prototyping, training, and collaboration. In this setting, however, the image quality of even the best commercial VR headset just won’t cut it.

That’s where VRgineers comes in. The engineering company designed its enterprise-grade VR gear, XTAL, specifically to transform the way professionals in the architecture, industrial design, automotive, and training sectors work.

VRgineers empowers professionals to leverage virtual reality on the job via simulations and prototyping.

Unlike the average gaming headset, XTAL is capable of total immersion, allowing pilots, for example, to train in a realistic cockpit environment and architects to fine-tune building details.

“We are pushing the limits of what is possible,” said Marek Polčák, CEO of VRgineers. “While retail headsets are designed for entertainment and low price points, we focus on providing high-performance headsets that make it difficult to decipher between simulation and reality.”

Moving forward, Marek said VRgineers aims to continue raising the bar when it comes to VR headset quality with breakthroughs that will make wearing VR hardware a more natural experience.

Marek founded VRgineers in 2017 after working on a side project that opened his eyes to the limitations of VR headsets.

“I wanted to use VR for my hobby/business project, which focused on providing tourists the experience of simulated flight over a city,” he said. “I built everything up, but in the end, only a few were able to enjoy the software due to the poor quality of VR headsets.”

And after some time and a lot of frustration, Marek said he realized there was no hardware solution in existence that could suit his needs. Taking matters into his own hands, he decided to get together with a group of developers he was already working with on other projects. 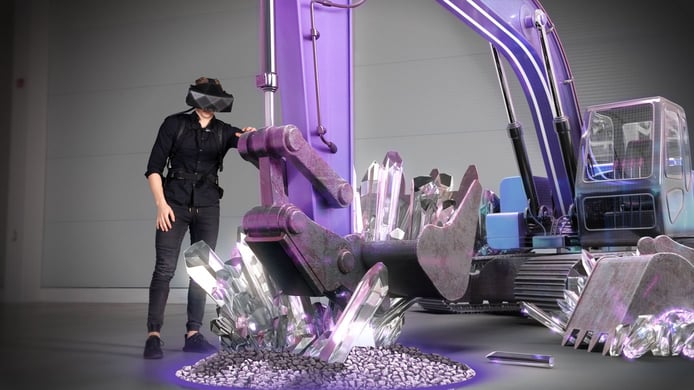 XTAL allows users to learn how to operate heavy machinery without the typical risks.

“I said, ‘Let’s do it ourselves,’” he said. “Of course, when we started, I had no idea how expensive and hard it would be. But I’m super happy that we did it because we managed to build a truly high-tech VR headset.”

VRgineers’ exclusive and patented optical system features non-Fresnel lenses that deliver a wider field of view and binocular overlap. The result is detailed, crisp imagery and one of the most immersive VR user experiences on the market today.

XTAL is packed with smart features, including voice commands, spatial 3D sound, and a hand-tracking sensor that allows users to interact with a VR scene using their own hands. It also features an automatic interpupillary distance (IPD) system that detects the user’s eyes and automatically adjusts the lenses for optimal image quality.

It wasn’t long before VRgineers realized that some of the best use cases for this technology were in the enterprise space. In the beginning, the team focused mainly on industrial design simulations for vehicles.

“We worked closely with automotive manufacturers worldwide to collect feedback on XTAL and improve the headsets accordingly,” Marek said. “At the same time, we began finding new opportunities and use cases for our VR product.”

He cautioned that the technology isn’t a one-size-fits-all solution. “VR is no magic wand that you can apply to everything,” he said. “You have to identify use cases where the user benefits the most from simulations or the visualization of models.”

VRgineers customers can use XTAL for high-stakes training scenarios, such as educating future surgeons via life-like simulations or teaching astronauts how to operate the latest space shuttle.

“In our customer base, you will find Formula One teams, the United States Air Force, the United States Navy, NASA — very innovative organizations that are looking to realize their goals using these new technologies,” Marek said. “And there are a lot of different, super interesting cases.”

For example, the international energy company E.ON uses XTAL to teach technicians how to exchange high voltage fuses. Crane operators also use the technology to aid in their training operations.

“When crane operators on oil rigs need to teach a specialist to operate their machines on, say, a smaller rig in a remote location, they have to hire a helicopter with a pilot to physically get that crane specialist on to the rig,” Marek said. “Instead, with virtual reality, they can have the same experience of operating it remotely.”

Marek told us that many companies that use XTAL can reduce risk and save a considerable amount of time and money on exercises that would otherwise have to be done in person.

“The key is to find the use cases that make the most sense financially, like the scenario with the helicopter and the oil rig,” he said. “Our virtual reality is also instrumental in processes such as pilot training, because you remove the risk of a crash.”

In the future, Marek said he believes teenagers and young adults will leverage AI to learn how to drive before practices in a real-life setting. “That is if all cars aren’t self-driving by then,” he said.

As for the future of VRgineers, Marek said the team will be hard at work on solutions that enable crystal-clear image quality and high immersion with hardware that is as unobtrusive as possible.

“There are always trade-offs with technology — and the biggest trade-off for our high-performance headsets is that they are a little bigger and heavier than other models,” he said. “One of our goals in the near future is to make the headset so convenient that when you put it on, you completely forget about the technology.”

The company has already made strides in this regard, reducing the number of connection cables from three to one. Moving forward, Marek said he hopes to go wireless.

In the meantime, VRgineers is also working on mixed reality solutions that will allow XTAL users to experience natural, hands-on interaction with real-world objects, such as vehicle dashboard prototypes, while surrounded by a realistic virtual world.

The camera module will make it possible for a pilot to see his or her hands interact with real objects in a virtual cockpit.

“We designed and developed a stereoscopic camera head that can be attached to the headset to combine physical objects with virtual space or the module can be connected virtually,” Marek said. “The great thing is the module is optimized for both of those scenarios, and it fits on our high-quality XTAL headsets with a high field of view, so you feel immersed.”