By: Laura Bernheim Posted: December 21, 2017
Follow "The Hosting Blog" daily as hosting experts, programmers, and tech managers go in depth on a variety of tech-related topics.

After fighting with the WordPress codebase for the umpteenth time five or so years ago, Craig Fitzpatrick had finally had enough. It was time to take on the world’s most popular content management system.

“We live in a WordPress world,” he said. “They’re one of the gorillas of our industry, but that’s not to say we can’t do better.”

Combining the simplicity of desktop publishing with a need to cut out the expensive service providers hampering many from getting online, Craig set out to rebuild the drag-and-drop web design experience.

His company, PageCloud, removes the costly barriers to creating a custom online presence and gives users a code-free environment in which to explore their creativity. PageCloud also cares for for developers and more experienced users by providing access to source code for fine-grain control. The website builder now serves thousands of businesses in more than 130 countries.

“We think that in the future, a few years from now, we’re all going to look back and laugh at this idea of hand-coding HTML,” Craig said. “Of course, a few people will have to use code to build out applications and those things, but the vast majority of things published on the web will be visually designed. We’re going to be one of those people who usher in this new era.”

How Craig Brought Web Design From Keynote to Web Browsers

The frustrations of managing another company’s WordPress website inspired Craig to spend many nights and weekends tinkering with a better option. Early on, he passed over working in Photoshop in favor of Keynote, Apple’s answer to Microsoft PowerPoint.

“I know Photoshop is the pro tool, but it’s kind of cumbersome and overloaded,” he said. “It’s a really powerful tool, but when you’re just trying to put together a few shapes and text objects, it’s overkill.”

Using Keynote’s font pairings and default color schemes, Craig would copy assorted shapes and text objects and paste them into a graphics editor (this time, he eschewed Photoshop in favor of Pixelmator) to create the image files. 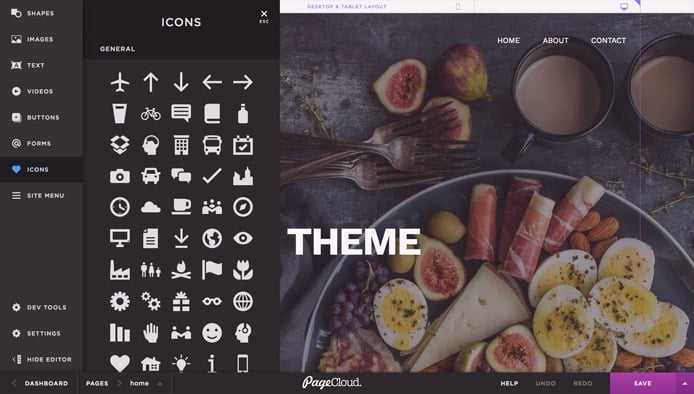 “I just loved how Apple had figured out how to turn a tech person, or a non-designer like me, into a designer by giving them text boxes, lines, and shapes,” he said. “With the very intuitive user interface and being able to drag and drop elements, I remember thinking, ‘If I could just click save and have it be a website, that’d be amazing.'”

The site builder Craig envisioned added another option to the standard choices aspiring site owners must make: either fill out a prebuilt, cookie-cutter template or hire a developer or agency to create your custom website — and continue paying them every time you want to make a change.

“You wouldn’t hire someone for $100 an hour to build a Keynote or PowerPoint deck for you, so why should you have to do that to put a page on the internet?” he asked.

After years of toying around with his idea to improve upon content management systems, Craig launched PageCloud in September 2014 with a few former colleagues. Less than a year later, TechCrunch tapped the platform as a finalist for its Disrupt NY Startup Battlefield. 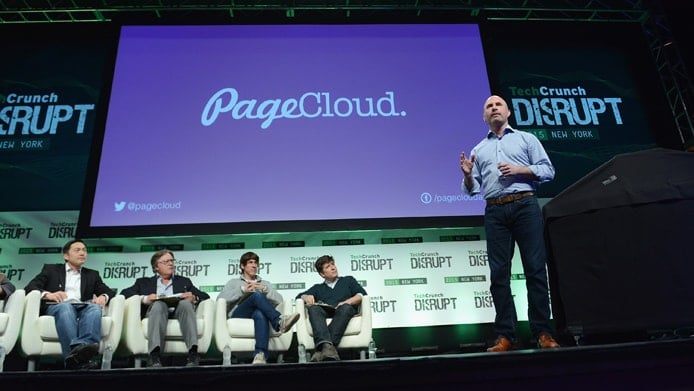 PageCloud debuted at TechCrunch Disrupt NY 2015 within a handful of months after launching the company.

Even with its early success, the PageCloud team has not rested; the company recently launched a new editor interface and will follow up with more tools, features, and integrations in early 2018.

“We’ve learned a lot from our users about what they like and what they don’t like,” Craig said, noting typical customers were a lot less tech-savvy than the team had expected. “They can’t build from scratch, but that doesn’t mean they don’t use the internet. They’re online; they’re just not writing code.”

PageCloud support agents carry out roughly 30,000 conversations with customers every six months, according to Craig. Changes to the platform incorporated feedback from both novice site owners and more experienced, professional users to make sure that neither audience was left out.

“This redesign was about cleaning up all this powerful technology we’ve developed and making it more discoverable and intuitive,” he said. “It’s like combining Photoshop with Keynote. Those are two different tools and two different audiences, and I think we’ve been successful in sewing the two together in a way that’s the best of both worlds.”

Why PageCloud’s Path to DIY Websites Adds Pride and Creativity

To describe the value PageCloud brings to customers, Craig compared the typical user experience with the traditional site creation process.

A few years ago, the conventional route for a small business to building an online presence involved hiring a programmer or development agency for roughly $10,000.

“You don’t have the skills to do it yourself, so you have to rely on service providers,” Craig said. “Their bread and butter is selling websites, charging by the hour, and having margins. Contrast that with being able to do it yourself for about $20 a month.”

PageCloud offers a 14-day free trial of its lone plan: fully managed cloud hosting, unlimited storage, expert support, app integrations, and a free year of a domain name registration and G Suite subscription. Customers can pay $20 per month when signing up for an annual plan or $24 for monthly service.

In addition to the massive cost savings, Craig said customers would save ample amounts of time by using PageCloud instead of an agency; he estimated the custom website path would take at least a month, while PageCloud users can either start from a blank page and publish a site in a few days or use a template and be done in a fraction of the time.

Beyond the cut-and-dry figures that show PageCloud’s return on investment, Craig said that designing and creating your own website brings extra satisfaction to those who choose not to turn their dreams over to a stranger for coding.

“You’re trying to describe to someone else what your vision is,” he said. “For all the gifts and skills that programmers have, sometimes communication and branding and business aren’t among them. And, vice versa, business and creative folks can’t do what programmers do. There are these two silos; when you try to communicate from one to the other, things get lost in translation. Don’t underestimate the sheer joy of sitting down and doing it yourself and being in control of your own destiny.”

A Culture Based on Addressing Customers’ Feelings and Pain Points

“I don’t think you can build a disruptive business just by responding to customer support requests,” he said. “I think you have to look ahead and understand in an unspoken way what is driving your customers, whether it’s the pain they’re feeling or also the dreams they’re trying to accomplish.”

Craig encourages employees to “forget everything they’ve ever known” about content management systems and WordPress and dream from a blank slate. With such a big market already dominated by major players, Craig said he wants no part in the feature war. Instead, PageCloud competes with the smaller and more agile companies that emphasize innovation.

“We are a technology company on one hand, but we’re not just here to build technology,” he said. “We’re developing technology for the purpose of delighting users in a particular problem area such as publishing on the web.”

When recruiting and hiring employees, Craig said he emphasizes finding people who have a similar value system about improving user experiences rather than simply shipping new code as frequently as possible.

“The number of times we use the word feel in this office is very funny,” he said. “That’s very unusual for a software company. We’re constantly asking each other how things feel and what our users are going to feel. That’s a very different kind of culture, but it’s in our DNA. It’s our strategy for the kind of company we want to build, the kind of product we want to create, and it’s how we want our customers to feel when they use our product or have any experience with PageCloud.”