By: Jon McDonald Posted: November 5, 2020
Follow "The Hosting Blog" daily as hosting experts, programmers, and tech managers go in depth on a variety of tech-related topics.

Remote work is the new normal for business operations during the COVID-19 pandemic. Fewer in-person interactions translate to more virtual meetings, and a greater reliance on communication technology — platforms that may or may not operate in real time. Zoom took off in the early months of the pandemic while chat tools, including Slack, extended theirs to teams that needed to collaborate. And most workers saw more, and longer, emails in place of in-person meetings.

But that type of communication slows down feedback and can make conveying instructions complicated. According to research from McKinsey & Company, workers spend an average of 28% of their day reading and answering emails and an additional 14% communicating and collaborating internally. The consulting firm suggests that better collaboration tech could improve productivity by as much as 25%.

Joe Martin said he saw first-hand the growing interest for better ways to collaborate when the pandemic struck. And as Vice President of Marketing at CloudApp, he said he knew his company’s product could help streamline communication channels by introducing contextual visuals.

“We saw such a large uptick in usage,” Joe said, noting that the company ran the data on the trends it saw with product adoption. “People were working more hours and executives were using it 40% more. The remote-work content on our blog had more than 100,000 views in a month and a half in Q1 of 2020.”

The CloudApp product reduces the friction of text-based messaging by allowing professional teams to create and share screenshots and easy-to-generate custom videos that are stored in the cloud. Those resources provide the visual nuance that would otherwise require drawn-out back-and-forth text between employees.

“For me, it’s all about the added context, and it eliminates long emails,” Joe said. “I remember at a previous job, we’d have these massively long back-and-forth emails. And they’re long because it’s late at night, and no one’s going to hop on a call. So the emails miss context and tone, and you don’t know if the VP that you’re exchanging this email with is annoyed that they have a very long message to read.”

Customers cite ease of use as CloudApp’s top benefit in product reviews, which trend 90% at the five-star level.

“You download CloudApp, and you instantly see value,” Joe said. “Everybody takes screenshots. But instead of taking a screenshot with a native tool and uploading that to Google Drive or Dropbox and getting a link, it eliminates all those steps. You take a screenshot, and you immediately get a link you can share in Slack or wherever you are.”

For example, a product manager could use CloudApp to communicate changes to a graphic designer by sending an annotated screenshot or recording a brief video or screencast — including audio — that demonstrates the modifications he wants. 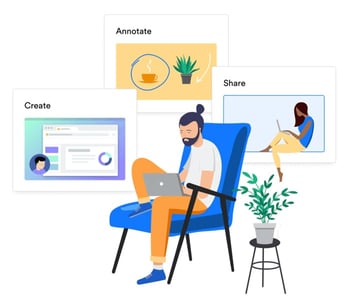 Annotated screenshots and short videos get accurate information across quickly.

CloudApp uploads the media asset to its cloud-hosted storage almost immediately then shares a link that can be included in a brief email or a Slack channel. Similarly, a software developer could offer a brief proof-of-concept feature video for review by stakeholders without investing time coding that feature in advance of a formal demo session.

“Instead of typing out an email that a designer is going to have tons of questions about, I just do a little video and explain exactly what I want, and they can comment inline with their questions,” Joe said. “I’ve seen it eliminate a lot of questions across every portion of a business. Our customer service people close tickets three times faster, and our own sales team increased our response rates by 10 times using a one-line message and a cloud video.”

The software works on several platforms. CloudApp’s iOS mobile app offers the same functionality as the desktop app for Windows, macOS, and Chrome. And rather than cluttering a device’s camera roll, images and videos are stored in cloud-hosted servers.

CloudApp’s internal product design is driven by customers, as well. The company even has a public Trello board where users can request new features.

“People can upvote ideas on Trello to highlight features they think would be great to add,” Joe said. “And then we have the gratification of updating that board when it’s live.”

As with many other SaaS tech companies, another significant source of feedback is CloudApp’s experienced team. 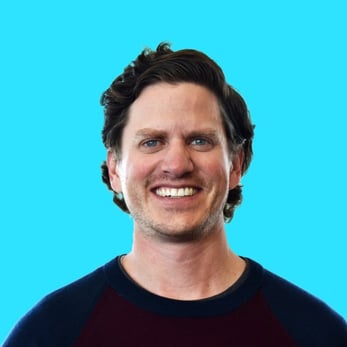 Joe Martin, Vice President of Marketing at CloudApp, spoke with us about the platform’s capabilities

“We’re our largest customer — CloudApp on CloudApp,” Joe said. “Our team is always telling us on the Slack channel that it’d be great if we could do this or that.”

CloudApp uses more traditional feedback channels, as well, including holding quarterly business reviews with the company’s major clients. By late 2020, CloudApp had earned a 9.4 out of 10 from TrustRadius and 4.7 out of 5 on Gartner’s PeerInsights. Its iOS app also had a 4.5 of 5 rating from nearly 450 reviewers on the App Store.

Based on feedback, CloudApp will soon deliver three significant enhancements to the platform: annotations to videos, commenting and collaboration, and parity between the platform’s native Windows and Mac apps.

“We’ve gotten a really lot of good feedback from big companies that they couldn’t do this transition without CloudApp,” Joe said, referencing the pivot to work-from-home setups. “So it’s been pretty cool to be a part of helping people ease into this new normal.”

And a nimble product road map that’s responsive to consumer needs is a core component of that success.

The new normal is likely to remain to some degree even after the pandemic ends. A study commissioned by Cisco Systems suggests that half of companies plan to shrink their office space post-COVID-19. The survey estimates that 90% of all office employees will not be working full time on-site after the pandemic restrictions lift, with as many as 36% working from home full time or half time.

This sea change in workforce dynamics requires a substantial investment in alternative processes and communication tools to ensure that virtual teams can be productive. The culture of extended face-to-face meetings followed by detailed email summaries won’t be back anytime soon. And with it, the culture of compliance that insists on cover-your-backside email exchanges will be gone, too. In its place, traditional and SaaS solutions will combine to streamline content and delivery.

CloudApp’s unique contribution to this transition is context. The old slogan that a picture is worth a thousand words seems to play out for CloudApp customers. Annotating screenshots, developing animated GIFs, and sending short video clips provides context that a wall of text cannot replicate.

CloudApp sends user-generated media to a cloud-hosted storage service and automatically shares it as a link to reduce the friction inherent in rich media sharing. Instead of recording, uploading, and sharing as separate steps, CloudApp incorporates those actions in one easy-to-use tool. Less friction leads to quicker collaboration — and eventually, to fewer novel-length emails.

“We’re all about creating quick, productive opportunities for people to communicate,” Joe said. “And encouraging the skip-the-long-email or long-conversation approach and send a cloud video instead.”