By: Jon McDonald Updated: August 13, 2020
Follow "The Hosting Blog" daily as hosting experts, programmers, and tech managers go in depth on a variety of tech-related topics.

TL; DR: Cenmax provides a competitive range of web hosting and enterprise email services to more than 3,000 clients across 80 countries. The company owns most of its global network infrastructure, and it passes that value on to its customers. Cenmax, based in India, also recently expanded its product portfolio, including its WordPress hosting capabilities, with the launch of a suite of business support applications through its own SaaS platform, Cenmax Fluid.

Cenmax, a hosting services provider based in India, differentiates itself with a business model that is both straightforward and unique. Its philosophy is based on providing value-added features without additional charges, an approach welcomed by its more than 3,000 customers worldwide.

The company can accomplish that thanks to the economies of scale made possible by owning most of its global IT infrastructure.

Cenmax operates 19 datacenters and has more than 100 other points of presence around the world — including 10,000 servers in all. The company also operates a global bandwidth backbone with a capacity of more than 5Tbps.

And Cenmax continues to innovate, recently launching Cenmax Fluid, a new brand that provides a suite of business support services delivered through an SaaS model. The team designed Cenmax Fluid to provide everything a growing enterprise needs — from invoicing and project management to IT helpdesk and lead management tools — at a reasonable monthly rate.

“We concentrate on a single objective,” said Kavin Raj, Founder. “Cenmax clients should not need any other solution outside of our solutions. We aim to be an all-encompassing hosting and business support services provider.”

A One-Stop Shop Concept That Maintains Value for Customers

Cenmax is also re-envisioning the concept of the one-stop shop. That approach served IT market leaders well until supplier lock-in caused the practice to lose some of its appeal.

But Cenmax’s innovative approach to the market and its reimagining of value have allowed the company to thrive as a comprehensive hosting services provider. Cenmax has been adding value to its solutions at affordable prices since 2014, according to Kavin. And it has taken time for the market to understand and accept that there is no catch.

“People who stumble upon our pricing ask us, ‘How on earth are your prices so cheap with these features?’,” Kavin said. “The answer is pretty simple — it’s because Cenmax owns most of its networks and the underlying hardware. It helps us save money, and we share the savings with our customers.” 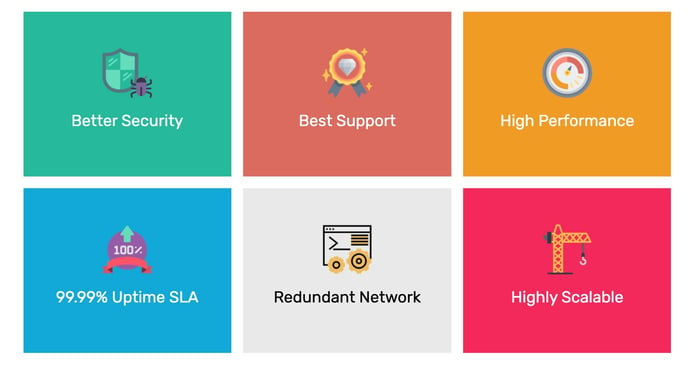 But those low prices don’t equate to low-quality offerings, Kavin said. Instead, the quality of Cenmax’s hosting services is at least a decade ahead of those provided by rivals positioned in the website hosting segment, according to Kavin.

“Cenmax is concentrated squarely on giving customers what they need, rather than upselling or downselling extra features,” Kavin said. “Our goal is not to charge extra for new features — we simply introduce them to the client’s existing package.

SMBs Can Scale Seamlessly From Shared to Dedicated Servers

As a global web hosting provider, Cenmax achieves economies of scale by owning the hardware infrastructure on which its products run. That requires a significant upfront investment in facilities and equipment, especially when expansion happens across multiple continents.

Kavin and his team of IT experts understand that enterprise customers will have greater confidence in a technology services partner that owns and operates its global IT estate — especially one that includes more than 10,000 high-end servers.

Dedicated server plans come in three tiers, depending on business size and needs.

“Most Cenmax customers are in the SMB space, don’t have their own IT teams to put these solutions together, and rely on our expertise to guide them,” said Kavin. “Having a dedicated server option makes it easier for hosted SMBs to scale up to have greater control over their IT as their business needs grow. And they can speak to the same Cenmax support personnel they already know and trust.”

Cenmax has locations in New York City, Dallas, and Toronto in North America; Amsterdam, Frankfurt, and London in Europe; and Delhi and Singapore further east. The company has also recently opened a new datacenter in Los Angeles. This facility is SSAE Type 16 certified, which makes it a secure place to host sensitive data.

A Range of Business Ops Tools from a Single Supplier

Cenmax describes its recently launched Cenmax Fluid offshoot as a tool to help efficiently manage leads, provide client support, and organize projects. The solution is primarily aimed at SMBs in the design and software development sectors.

Cenmax Fluid offers four core software components, including project management, an IT help desk ticket system, an Invoice system, and a lead management tool. It is priced at three tiers according to a client’s needs: startup, small business, and medium enterprise.

The offering began as an in-house solution for Cenmax to use, Kavin said.

“We were working on a project and having to buy various support services and products. At first, that seemed like a cost-effective approach — $100 here, $100 there, and so on. But then we realized that our margins on fairly modest projects were squeezed by the costs of the different support services that we only needed incrementally. Those $100 services add up and can easily turn into a $10,000 outlay.”

Cenmax Fluid addresses the dilemma that many smaller businesses face when they want to operate on a per-project basis.

“Typically, SMBs in design and software development will use a lot of separate applications to get one thing done on budget,” he said. “But they have to keep jumping between applications, and because of that, they go off-track, their productivity gets killed, effectively, and no one involved in a project is truly productive. Cenmax Fluid has everything they want in a single package.”

The COVID-19 pandemic has impacted both the IT services industry and its customers. But the pandemic has been a factor in accelerating Cenmax’s pace of expansion.

“We began to see evidence that Cenmax customers and their projects were bootstrapping, given the fact that so many people around the world have had to work from home due to the pandemic,” said Kavin. “Businesses are desperately looking to speed up their applications for their users. We believe that the introduction of our Los Angeles datacenter facility will help businesses overcome the ongoing situation.”

It will take time for the IT services sector to adapt to the new normal, said Kavin, but for Cenmax, the corporate culture it has established over the last six years remains steadfast.

Cybersecurity is another area that has been tested by the pandemic. In May 2020, Cenmax announced that it would provide free DDoS protection to all its Linux VPS and Windows VPS users, no matter their plan or location. Cenmax is currently providing VPS servers in 10 locations across three continents.

“Moving forward, the core concept behind Cenmax’s success stays the same,” said Kavin. “Simply adding value for customers, rather than just taking money from them. We should constantly add value for those payments, and we will continue to compete successfully on that basis.”