Disclosure: When you purchase through links on our site, we may earn a referral fee from our partners. For more, see our
ad disclosure and review policy.

When I think Bluehost, I think WordPress, a cool team culture that inspires attentive customer support, and an epic night of Top Golf with the Endurance family. Bluehost has a rock-solid reputation in the shared hosting space, but the versatile host has grown alongside its customers to accommodate every hosting need — from shared to virtual servers and beyond.

With Bluehost, you’re guaranteed server resources, and the hardware is powered by SSD storage and manufactured by the best. It’s a host with which you can easily migrate to a cloud-based or dedicated server once you’ve outgrown the shared server environment, and trust us when we say: Fewer moves between hosts means fewer headaches for you!

We took Bluehost’s servers for a test run — evaluating page load speeds, setup time, security, and ease of use.

Here, we delve into the scalability and reliability of Bluehost’s VPS offering. Talking everything from server setup to operating system and managed services, we’ll help you determine whether this industry leading host veteran is the best fit for your website scaling needs.

Bluehost is an excellent entry-level host in many respects. The company welcomes first-time site owners into the world of web hosting with open arms and a feature-rich shared server hosting offering. As your site’s needs develop, Bluehost ushers you into the realms of VPS or dedicated hosting. It’s a full-fledged host for every hosting need or website scale.

As we reviewed Bluehost’s virtual server plans, we found the same breadth we’ve come to expect from this legacy web hosting provider. Start small, and add RAM, CPU cores, and disk space as you grow. The pricing model is pretty comparable to that of other popular hosts, and we appreciate that SSDs come standard and bandwidth abounds. As an added bonus, Bluehost VPS plans come with 100% managed support — but more on reliability later.

Without further ado, check out what our hosting gurus had to say about VPS plans by Bluehost:

Ryan Frankel (HostingAdvice.com): When comparing the performance versus price of VPS plans, Bluehost brings supreme value to the table. In addition to competitive pricing, the company offers premium support and excellent uptime compared with other VPS options in the industry. If you’ve... Go to full review »

Bluehost brings a comprehensive feature portfolio to match the competitive pricing. As we did a mental run-down of what we expect from a leading VPS host, the standard prerequisites were present and accounted for:

Optional features include SSL certificates, domain privacy, spam protection, SiteLock protection, and additional storage. All Bluehost servers are managed in-house, and the support staffed by Endurance International Group (EIG), which acquired Bluehost in 2010, is on call 24 hours a day, seven days a week. Just call +1 855-503-0450 to get in touch with an expert.

VPS pricing is possibly the most variable of all the hosting types. You can find a VPS for as little as $5 an instance to upward of $100 per server. But think about it: A VPS can be used to host sites with 30,000 monthly visitors or 30 million — so the pricing disparity is by design. VPS hosting is the most flexible in terms of server configurations, resources, performance, and cost. And Bluehost sits right in the thick of the pricing standard. 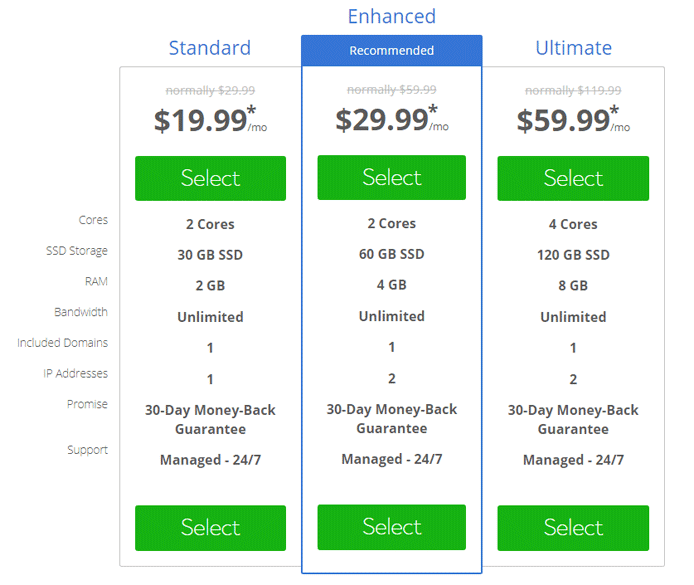 Bluehost VPS plans are affordable and provide virtually — ha, get it? — all VPS hosting essentials.

Sure, there are hosts that offer a little more server oomph for your hosting buck, but Bluehost is on par with competitor pricing. The free SSDs are a huge benefit, and many hosts charge a premium for managed services, so there’s another value-add. All in all, you can find a VPS plan that suits your budget and your website needs with Bluehost.

Aptly named Next-Gen VPS Hosting, Bluehost’s virtual server plans back a ton of performance into very small machines. Beginning with two cores is pretty common, and you can add storage, memory, and CPUs as needed. Solid-state drives give servers an added speed boost.

A key metric we use to gauge performance — and we’re not alone — is uptime. It’s exactly what it sounds like: the percentage of time your website (or the server it’s hosted on) is online and accessible. If you’re running an online business or an in-any-way-transaction website, downtime means revenue loss. The best hosts recognize this with uptime rate guarantees. Providers may promise to keep your site or server online X% of the time — typically 99.9% to 99.999% — which gives customers confidence in their services. While every hosting expert will tell you the more nines, the better, 99.9% uptime is pretty respectable industry-wide.

We wish Bluehost would tack on an extra nine or two, but the company’s uptime rates have historically been pretty reliable. A host’s reliability is more than a measure of network uptime, however. It’s one part hardware reliability, one part human reliability — you know, the folks who are there to help when the tech does inevitably fail.

It’s hard to find a family-owned-and-operated feel with a hosting provider these days. I’d say it’s the #1 complaint thrown at the hosting industry: The service is robotic or nonexistent. “Why can’t I get anyone on the phone?!” *throws cell phone at wall*

Bluehost tries its damnedest to deliver on-demand expert assistance to its customers, and while the support has gone down since the EIG takeover, we commend the team for offering managed services across all VPS plans.

How Do Bluehost’s Virtual Servers Compare with Those of Competitors?

We’ve repeatedly rated Bluehost among the ranks of leading hosts for WordPress, cloud servers, and shared hosting. The host is beloved by beginners and veterans, and you’ll find the company listed among our top picks for VPS as well.

When we reviewed the most noteworthy virtual server hosts, we took setup time, uptime, storage, security, and support into account. As you’re weighing your options, be sure to keep this article and our top recommendation for VPS hosting in your hip pocket:

Bluehost VPS Plans are Hard to Beat — and We Bring the Best Deals!

Looking back on that EIG party — amid the flying golf balls and free desserts — the Bluehost team wore its work hard, play hard badge with pride. It’s a crew of passionate hosting fans, and I always look forward to hearing whatever they’ve cooked up next.

As for the VPS options, Bluehost boats industry-standard hardware at fantastic prices. You’ll be hard-pressed to find something cheaper or with a shallower learning curve. Head on over to our Hosting Deals section for a complete list of HostingAdvice reader-exclusive deals on Bluehost servers. May the virtual force be with you!

How to Install a WordPress Theme via the Directory, Upload, or FTP

Our Experts Put SiteGround WordPress Hosting to the Test

Educate Yourself: 2018’s Best Hosting Plans for Teachers and Students