By: Christine Preusler Posted: October 22, 2018
Follow "The Hosting Blog" daily as hosting experts, programmers, and tech managers go in depth on a variety of tech-related topics.

TL; DR: Nearly 10,000 enterprise customers around the world use Proxmox IT infrastructure software. Proxmox Virtual Environment, the company’s flagship product, integrates a comprehensive virtualization platform and management feature set in an easy-to-use web-based package. Proxmox Mail Gateway works within existing systems to protect email servers from spam, viruses, and malware attacks. Both products carry open-source licensing, so features are freely available to all users and an active worldwide developer community works with the Proxmox team to drive improvement and innovation. And because enterprises depend on their software providers to deliver operational continuity, Proxmox offers subscription-based access to customer-support services and stable and tested repository packages. The result is flexible, scalable, and highly cost-effective virtualization and security for enterprises.

Native Instruments manufactures audio production hardware and software that pushes technological boundaries to present new opportunities for musical creativity to its global customer base. More than 450 employees in six international offices continue to drive the digital revolution in music by innovating the company’s products in response to customer feedback.

To efficiently and securely deliver the robust applications required by its engineers, Native Instruments decided to virtualize its IT infrastructure by creating multiple software environments on existing server hardware instead of deploying each system on a dedicated server. After working with several open-source virtualization platform providers, Native Instruments turned to Proxmox Virtual Environment (Proxmox VE) to enable this new architecture. 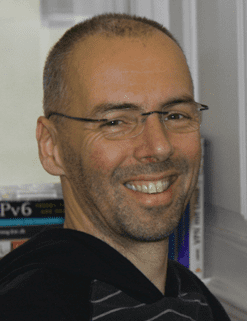 “From the beginning, we really loved the user interface of Proxmox VE as well as the live migration feature,” said Daniel Wedewardt, Director of IT at Native Instruments. “Thanks to those features we could ensure an almost uninterrupted operation — but at a fraction of the cost of commercial alternatives.”

Since starting with Proxmox in 2011, Native Instruments has scaled the system in response to corporate growth without making major changes to it. Because Proxmox VE uses standardized technologies and is designed for lean operation, Native Instruments uses commodity rather than custom hardware, saving additional costs. And to ensure operational continuity for the business-critical applications running in the virtual environment, it relies on Proxmox’s subscription-based support service. “It helps us sleep more calmly,” Daniel said.

Proxmox VE was born out of necessity. To meet the internal needs of the Proxmox development team, the company built out the virtualization platform.

“We developed Proxmox VE because we needed a user interface for the open-source virtual machines and containers we were deploying in our own infrastructure,” said Proxmox CEO Martin Maurer. “And because it was such a unique product, we made it available to the public.”

Since 2005, Proxmox has been building its business based on open-source software. Open-source primarily describes an open development model in which products are created via collaborative work on the source code where all parties, including users, can see the changes.

“Our solutions enable simple and agile IT infrastructures while minimizing total cost of ownership,” Martin said. “We’re always working to make our products more powerful and easier to use.”

A distinguishing feature of Proxmox VE is its inclusiveness. Unlike many other virtualization platforms, it tightly integrates virtualization with software-defined storage, networking functionality, backup, and a firewall, and makes it all available in a single web-based interface.

Software-based emulation of distinct server environments on the same hardware takes full advantage of available computing power and is easier to accomplish than mounting new physical servers every time a new OS environment is required in the datacenter. Server provisioning — or creating and taking down these environments — is a matter of a few clicks on a screen rather than a resource-intensive physical process.

Containers are even lighter than virtual machines because they don’t emulate OS environments. Instead, they run application packages on top of the server OS while sharing many of the OS’s software resources, which reduces storage requirements further.

Both VMs and containers have their place in streamlining the enterprise datacenter, but containers are faster, more agile, and more portable. In Proxmox VE, all of this functionality is available in a default installation that requires a maximum of 1 GB of memory, and that can run on off-the-shelf hardware.

“Building Ceph packages on our own allows us to maintain it better,” Martin said. “We can fix bugs quickly without waiting for repackaging from the Ceph project itself.” 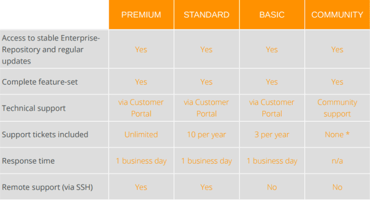 Consultation with the Proxmox support and development teams is also available to subscribers via the Proxmox customer portal. “We offer several subscription levels so a business can start with a lower level and scale as its needs grow,” Martin said. “Even the most basic support level includes access to our stable enterprise repository and updates. More extensive users can receive unlimited support tickets and have our team connect remotely and securely to their systems anytime it’s required.”

Proxmox Mail Gateway integrates into existing email systems and is compatible with all popular mail transfer agents. It can also run on a hypervisor as a virtual appliance — within Proxmox VE, for example, or in any other virtualization platform. A single server can handle unlimited email domains with multiple internal mail servers and millions of emails per day.

Because Proxmox Mail Gateway sits between the datacenter firewall and the internal mail server, it filters emails before they reach the mail server, maximizing resource utilization. And filtering is highly configurable.

As of 2018, the 12-year-old Proxmox Mail Gateway is available under the same open-source license as Proxmox VE. Business users can purchase commercial support subscriptions, and all features are available free of charge to all users.

“The open-source model makes scaling capacity as business needs grow easy and very affordable,” Martin said. “And we all love the spirit of open-source and working within that system.”

“At Proxmox we have a great open discussion culture and flat hierarchies,” Martin said. “The team has a great dynamic, and we all have our special interests and strengths. If someone is convinced as to the viability of new technology or feature, they’ll work hard to prove it works.”

But even more often, input comes from outside the office. “The open model delivers many benefits,” Martin said. “Open-source projects have short lines of communication. Anybody can provide feedback directly and visibly to the developers. There are no internal emails hidden from the public. Developers can talk directly to users. Everyone with a stake in the outcome is involved.”

For Proxmox’s enterprise subscribers, including Native Instruments, open source means the best of both worlds. “The community often surfaces common needs, and that sets the team working toward a solution,” Martin said. “That’s how we most often implement new features — our users need them.”