TL; DR: While many hosts boast about their managed services, the Zuver team believes that the term has all but lost its meaning. That’s why the Australian company offers what it calls “smarter” hosting services and has added new solutions for both budget and premium customers in 2019. Over the years, Zuver and its parent company, VentraIP, have adapted to an increasingly competitive and consolidated Australian market. But Zuver differentiates itself through 100% in-country customer service and upgraded infrastructure.

Zuver’s journey began in 2010 with the launch of VentraIP Australia, a provider that quickly became a significant player in the country’s hosting marketplace. By 2012, VentraIP had grown so large that the company decided it could better serve a subset of its customer base by creating a separate, dedicated brand.

“We wanted VentraIP to focus on the premium end of the business, but we didn’t want to force a price increase on our customers,” said Cheyne Jonstone, the Executive Chairman of VentraIP. “We decided to use our skills in automation to service the other businesses in the market, but do it through a different brand.”

In that customer-first spirit, VentraIP started a competition on its forum to allow users of the new brand to name the company. The eventual winner was Zuver, from the German word “zuverlassig,” which translates to “reliable, dependable, and trustworthy” — a definition that paired perfectly with the new company’s mission.

And ever since, Zuver’s fully automated domain and hosting services have provided customers with the right products at the right time.

“As one of the owners of the business, I can tell you that it hummed along nicely. But at the end of 2018, we noticed that the budget end of the market was in a transition period,” Cheyne said. “Even the bigger players were starting to realize that customers were happy to pay more for a better product. Although Zuver was technically a budget brand, it had always attracted premium customers. So we decided to rebrand and add offerings and relaunched the company in January 2019.”

The rebranded Zuver still caters to the budget end of the market with custom cPanel services, but it has added a selection of hosting products for WordPress users. And the new Zuver offers 100% Australian customer support and upgraded infrastructure that helps customers get the most value from their hosting plans.

Why Businesses Are Turning to Zuver’s Alternative to Managed Hosting

When the Zuver team first started thinking about rebranding, it dove into competitive analysis by signing up for managed service accounts with local and national hosting providers and examining each platform end-to-end. The team discovered that every service that cost less than $50 a month never offered more than a shared server.

“I didn’t see that as a truly managed service. What most companies call ‘managed WordPress hosting’ is just cPanel with Softaculous. They auto-update with a back-up agent, but no one is there physically looking at the service,” Cheyne said. “That’s what a ‘managed service’ should be. It’s the same phenomenon that we saw years ago with the word ‘cloud.’ Every provider started saying ‘cloud’ whenever they could, but it lost all meaning and became a useless buzzword. That’s what ‘managed service’ is now.”

Rather than try to fight for a more accurate definition of “managed service,” Zuver decided to refer to its WordPress hosting services as “smarter.” And those services include experienced professionals who monitor everything that’s happening.

And, when planning its rebrand, the Zuver team also contemplated changes to its cPanel services but decided to continue with them because of the value they provided to customers.

“We realized that getting rid of cPanel wouldn’t be fair to our customers. Services aimed at the budget end of the market are slowly disappearing — but those customers still need representation,” Cheyne said. “That’s why we decided to keep a customizable cPanel. We concluded that the market was going to shift in a more application-specific direction — and we designed a service that would be ready for that shift.”

Point-and-click site builders like Wix are becoming more popular, and they allow many people without a background in development to build their own websites quickly. And with the addition of WordPress’ Gutenberg block editor, this shift is only accelerating. That’s why Zuver not only continues to support WordPress but is also working to provide hosting options for additional platforms, including Joomla.

Adapting to the changes in the hosting marketplace hasn’t always been easy, but Cheyne said that early research allowed Zuver to understand what types of customers it would serve.

“Before we decided to rebrand Zuver, we researched exactly what percentage of Zuver and VentraIP customers used WordPress. Extraordinarily, it was more than 40%,” Cheyne said. “That was when we first realized the market was shifting away from straight hosting services to application-specific hosting services.”

And while that is the most recent trend that the VentraIP and Zuver teams have had to navigate, they have adapted to many others in the past. When VentraIP began, the marketplace was far different than it is today — Amazon Web Services was a minor player, Rackspace sold dedicated servers, and Microsoft Azure hadn’t even launched. 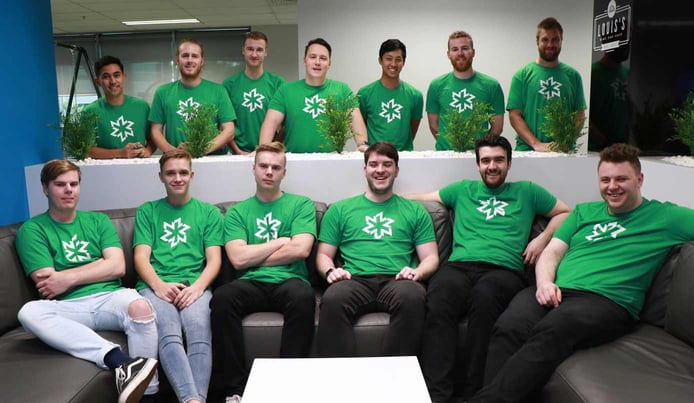 The Zuver team has helped the host adapt to the Australian market since 2012.

In the early 2010s, VentraIP had between 20 and 30 competitors in the Australian market. But, much like in overseas markets, Australian hosting providers have seen plenty of consolidation over the years.

“I remember meeting the guys from A Small Orange hosting company years ago. They were up on stage, adamantly telling the audience that they were never going to sell,” Cheyne said. “And today they’re owned by Endurance International Group (EIG),” Cheyne said.

As the stakes got higher, VentraIP and Zuver teams saw the market close in. Soon, Australia had five major hosting conglomerates — MelbourneIT, GoDaddy, CrazyDomains, and Hostopia Deluxe, that all fiercely compete for customers.

That’s why the leadership teams at VentraIP and Zuver decided they needed to set themselves apart further by making a bold move — keeping their entire teams in Australia.

Continuing to Set Trends by Challenging the Status Quo

Since the beginning of its journey in 2012, Zuver has learned much about the Australian hosting marketplace. That knowledge allows the team to confidently change course to align with industry expectations — and when to set new ones.

“We were surrounded by big fish with deep pockets,” said Cheyne. “We stopped and said to ourselves, ‘We need to think about what we’re going to do here.’ And we decided to bust the trends.”

At the time, Zuver outsourced support to India — just like all of its competitors. It decided that bringing that support back to Australia would differentiate its services — but would come at a cost. When the companies finally made the decision, they stretched their budgets thin to make it happen. But soon, they noticed a fundamental shift. Not only were customers happier, but they were also spreading the word about Zuver’s responsive support. Soon, new customers were flocking to the host.

Then, the team made a second bold move. Over the last few years, Zuver has replaced its entire network. Where it once deployed the same Cisco 7200s that its competitors used, Zuver now has new Brocade hardware. It also made the switch to SSD, choosing to skip over other commercial-strength solutions and add Samsung SAS SSD, with nearly 50K IOPS in each box.

“Our customers truly appreciate our transformation. As we’ve upgraded our technology and brought our support team in-country, almost all of our customers have stayed with us,” said Cheyne. “And we’re seeing the largest-ever uptick in customers adding new services. It has been an incredibly exciting journey.”