By: Jennifer Young Posted: September 7, 2018
Follow "The Hosting Blog" daily as hosting experts, programmers, and tech managers go in depth on a variety of tech-related topics.

TL; DR: If you’ve ever wished you could see a full list of all the world’s web hosting plans, WHTop.com is about as close as you can get. With more than 13,000 active hosts in its database, the hosting review site provides several ways for site owners to compare and contrast the seemingly unlimited options found around the world. Since 2004, WHTop has been a leading source of information about the industry and continues to deliver the scoop on which providers may be a fit for a specific online mission.

There are tens of thousands of web hosts in the world. And, with many of these providers advertising similar feature sets and price points, it can be downright impossible to make an educated guess on which one might be right for you.

That’s where WHTop.com comes in. The online web hosting directory has catalogued more than 25,000 web hosts since it started in 2004. Founded in Austria and now operating in Romania, WHTop claims to be the world’s largest directory of web hosts, and — judging by the extent of its collection — it’s hard to argue differently.

As a leader in delivering information about the best hosting plans on the market, WHTop features more than 35,000 user reviews on shared, virtual, and dedicated server packages, as well as reseller hosting, email services, and colocation solutions, among many others.

At WHTop, the goal is to simplify the process of finding a host. And the site’s list of providers, comparisons, and testimonials have helped thousands of users decide on the best power source to broadcast their brands online.

Of the approximately 26,400 brands that are listed in the WHTop directory, about 13,885 are currently competing in the market and accepting new clients. These hosts come from all around the world, with countries ranging from Andorra to Zimbabwe, and nearly every continent.

Users can use keywords to sort through this massive compendium or search by company name for specific services and products. Advanced browsing functionalities include the ability to view hosts from specific countries or certain types of hosting packages and services, such as brands that offer web design services and those that run on Linux.

WHTop presents information on every aspect of a host’s offerings — from WordPress hosting to dedicated servers.

In addition to these methods of culling information from the database, users can peruse the curated Top 10 and Top 100 web host ratings overall and by country. These ratings are based on data from Alexa, Google PR, and other sources. WHTop will also show you recent social media updates from web hosts it follows as well as hosts that have had other recent activity such as new reviews, plans, and listings.

Hosting providers can add and manage their own listings for free, allowing them to accurately and fully present their plans and services. WHTop boasts that posting an entry on its site can attract up to five times more users for a host, which is an attractive number for providers looking to scale. Each submission is manually received to keep the web hosting directory accurate. Visitors to the site can then do their own comparison to view the differences between contenders for their business.

It’s one thing to be listed and searchable in the WHTop directory; it’s another to be on the website’s top-ranked lists. The website collects a number of statistics and data about each provider to determine which hosts rank top overall by country or in specific categories. For companies that aim to get on these lists, it’s best to include as much information as possible so WHTop can factor it all in.

For each host’s entry, WHTop will show a variety of analysis points that help users make a buying decision. Customers can see how complete the brand’s profile is with a percentage ranking under its logo. User ratings from WHTop are based on a five-star ranking, and there’s a link to read the reviews. On the right-hand side, the entry shows statistics, including the brand website’s Alexa ranking, the number of plans it offers, the number of testimonials the brand has received, as well as how many links to its website can be found across the web. 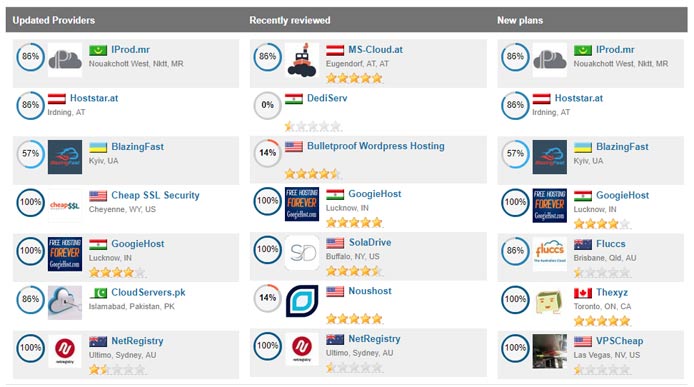 The goal at WHTop is to be as objective as possible when determining the ratings of hosting providers.

These and other factors — such as plans and services offered, payment and support options, and social media activity — are used to determine how any given host compares to others on the website. WHTop takes a holistic view of web hosting ratings. If you ask the database to show the top 10 hosts in the US, for example, you can see who runs the show based on the factors noted above.

In addition to rankings by country, WHTop also identifies the top hosts in specific areas. For example, there are many programming languages one can use to code one’s website, and WHTop has selected the top hosts for supporting specific languages like PHP, Ruby on Rails, and Java. Other categories include best host by database support, software type, hosting type, and domain registration.

To help hosting customers stay on top of what’s hot in the industry, WHTop provides news articles, help guides and newsletters sourced from relevant publications both independent and pertinent to specific web hosts. These articles cover information about hosting companies and the industry in general. WHTop relies on its readers — customers and participating web hosts, mainly — to add content to the News section of the website. Anyone can add a news story or announcement via a form on the website free of charge or membership.

WHTop’s mission is to deliver the scoop on the web hosting industry.

A recent partnership with HostingJournalist.com has allowed WHTop to add even more useful content for its visitors. Content from HostingJournalist is being integrated into WHTop’s review and comparison tools. This gives readers instant access to unbiased articles and videos about the web hosting industry and specific web hosts.

The overall goal of the partnership is to help users identify the hosts that fit best with their individual missions online.

Coupons and discounts are available for many of the web hosts listed in WHTop’s directory. These coupons are strategically placed in the host’s entry in the database so they are easily accessible to potential customers. Users can subscribe to an RSS feed of the coupons that become available on the website. Hosting companies can easily sign up for a WHTop account and manage their coupons and discounts.

Several useful webmasters tools are gifted in the Tools section of the website. There, users will find freebies, including a website speed tester, an IP address and geolocation lookup tool, and comprehensive lists of web servers and control panels. It’s a good place to get started with some of the essentials of finding a web host and running a website.

Some other features include:

With the help of its community of users, WHTop has built and maintained a robust database that has been ranked as one of the best catalogs of web hosts in the world. The website continues to grow and build on the amount of information it delivers. If you’re looking for a place to compare and contrast a wide variety of hosts, WHTop is a place to do some serious web host window shopping.