TL; DR: Founded nearly two decades ago by Charles Yarborough and James Gardner in response to the lack of reliable hosting services available, WebHost.Pro offered site owners something other hosts at the time couldn’t — high availability, optimal performance, and personalized support. Today, WebHost.Pro is still at it, helping SMBs and entrepreneurs build web presences and turn profits. The company’s stay-small-as-you-grow philosophy maintains the level of customer service of a startup while offering powerful datacenters connected to one of the world’s largest network hubs. With plans to improve user experience through an even more intuitive web builder and datacenter expansions on the horizon, WebHost.Pro is sure to continue to help businesses broadcast their messages to the world and keep online revenue streams flowing.

Most entrepreneurs carving out niches online in the 1990s likely experienced all the common frustrations that accompanied web hosting at the time. Many of the large hosts would saddle thousands of sites to individual servers, creating performance issues and downtime, and the automated, faceless, and inefficient support they offered left site owners feeling they were just cogs in a vast, unapproachable machine.

That was certainly the case for Charles Yarborough and James Gardner, two budding web entrepreneurs looking to make money online. During their discussions on the types of businesses they were going to try their hands at, Charles and James’s conversations kept coming back to one topic — their aggravations with their hosting providers.

“We had no intention of starting a hosting company,” Charles said. “The hosting was just so bad, with sites going down at least once a month. You could never talk to someone on the phone, and, if you sent in a ticket via email, it would take three or four days to get a response.”

That’s when Charles and James decided to start WebHost.Pro — a hosting company dedicated to offering site owners enhanced performance, high availability, and something no one else at the time provided — real people ready to deliver personalized customer support.

“Our goal was to be completely transparent,” Charles said. “We wanted everyone to know what servers we’re using, where they’re located, and exactly who we are.”

Because of WebHost.Pro’s unique model, customers began turning to the company in droves. Businesses — from large enterprises to SMBs — were looking to build a web presence with Charles and James’s brainchild. After nearly 20 years, not much has changed in WebHost.Pro’s philosophy. The company is still dedicated to providing a personable touch, but it has grown its datacenter and services into some of the hosting industry’s fastest and most economical.

Despite its products now being used by more than 50,000 customers worldwide, WebHost.Pro still maintains its trademark stay-small-as-you-grow philosophy — one that values real human engagement. Automated support systems often only provide boilerplate solutions to issues that can’t resolve unique user needs. WebHost.Pro recognized this drawback and differentiated itself to better serve its customer base.

Something as easily overlooked as a missing file or mistyped line of code within a site’s HTML files are easier to find with a support team that can actually engage user needs on a personal level. Although WebHost.Pro has scaled to satisfy modern business and client needs, Charles and James have rejected multiple offers to be bought out.

“We’re happy where we’re at,” Charles said. “We like having customers we get to know on a first-name basis.”

Because most of WebHost.Pro’s clients are either small businesses or entrepreneurs, the team can more easily relate to their situation — after all, even the company Founders know what it’s like to be treated like a ticket number. The team at WebHost.Pro understands SMBs have smaller budgets and have a large segment of their business at stake in every transaction.

Charles told us WebHost.Pro takes this into consideration in every interaction with its customers, making reliable hosting a priority. And he aspires to keep it that way.

“I think it’s a great goal to be able to tell your customers you’re there for them every step of the way,” he said. “We aim to stay small even as we grow. It’s a mentality that has stuck with us since day one.”

Though WebHost.Pro has provided hosting for enterprise-level clients, such as Sony’s MP3 download service and MySpace in the mid-2000s, the company’s main focus has always been on SMBs and entrepreneurs entering the online marketplace.

“A lot of our customers are people who want to break out of the grind of the nine-to-five and try to make money online,” Charles said. “We also cater directly to small businesses that need a reliable web presence but don’t have a large, computer-savvy staff.” 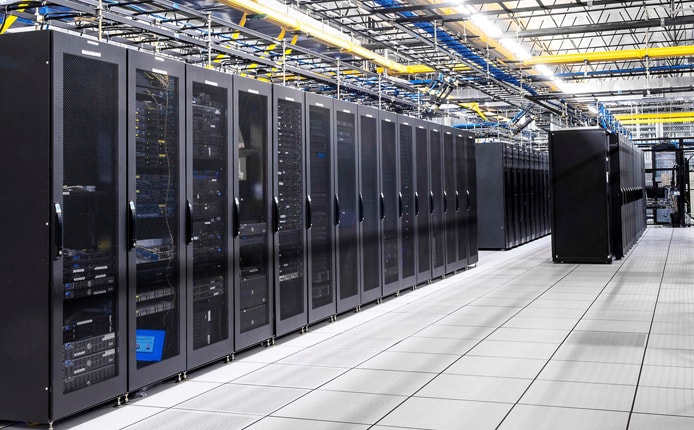 Because of its powerful datacenter, WebHost.Pro boasts speeds 200 times faster than its competitors.

Charles told us WebHost.Pro’s connections with these entrepreneurs and SMBs goes beyond a simple business-customer relationship. Rather, WebHost.Pro forms close partnerships with the businesses it serves.

And it’s this kind of personable approach that gives its partners peace of mind that their sites are in good hands. Even when there aren’t issues, WebHost.Pro maintains open lines of communication with its partners.

“We have a lot of venues where people will just chit-chat with us,” Charles said.

This focus on serving small businesses reflects WebHost.Pro’s core dedication of maintaining that personal touch throughout its two decades of existence.

WebHost.Pro makes it easy for webmasters to create sites with its wide variety of tools. The host provides many advantages over the competition, not the least of which is convenience.

“If I were to quantify the #1 advantage, I would say it’s time savings,” Charles said. “My mission is to make things as simple as possible. And I think communication is what helps that.”

Time is saved by providing a simple yet trusted platform for content creation, complete with active, personalized support and an arsenal of tools, including free and paid site builders and integrations with eCommerce solutions.

WebHost.Pro offers both shared and dedicated hosting to suit every budget. Shared hosting is cheaper, but the benefits of using dedicated servers include greater security and access to resources, allowing for faster load times.

In addition, WebHost.Pro provides hosting for resellers and VPSes and serves as a domain name registrar. Combined services can be purchased in packages along with free site-building tools.

WebHost.Pro also features support for eCommerce and FFMPEG video, as well as CPanel, WordPress, and Joomla. A free SEO cheat sheet is available on the site for webmasters looking to gain a competitive edge with a few simple site and content tweaks. This allows site owners to optimize their search rankings without dedicating resources to costly SEO services.

Charles and James founded WebHost.Pro with a mission to make a less frustrating and more personable way for businesses to get their sites online and keep them there. In addition to the extensive tools and services the company’s already developed, Charles told us WebHost.Pro plans to implement even more perks for businesses in the future. With a premium datacenter in Los Angeles, and shared space in Las Vegas, Canada, New York, Europe, and Australia, WebHost.Pro is looking to expand even further.

“We’re about to build another datacenter in Phoenix,” he said. “And we’re working on a new web builder that will hopefully be even more intuitive than the one we offer now.”

WebHost.Pro’s goal is to make it so someone with no coding or web development knowledge is able to build a functional and clean-looking website — or, as Charles put it, “so simple, someone’s grandma could do it.”

In addition to expanding its datacenters and developing a new web builder, WebHost.Pro plans to boost its search engine optimization features to make sites more visible and help drive traffic.

“We’re enhancing our SEO tools,” Charles said. “We’re going to include a new SEO area that will help people operate their SEO process.”

The goal is to help small business rank in search results without having to spend hundreds of dollars. Charles told us WebHost.Pro will automate the process with an SEO utility offered at no extra charge in its hosting packages.

“We want to offer the best hosting and web solutions and continue our dedication to a personalized approach,” Charles said. “It’s a constant evolution. The second you get comfortable, you won’t last.”