By: Sean Garrity Posted: April 2, 2019
Follow "The Hosting Blog" daily as hosting experts, programmers, and tech managers go in depth on a variety of tech-related topics.

TL; DR: Unreal Commander, a freeware file manager, has been a relevant tool since 2006. The program has outlived countless freeware programs in that span with a built-in FTP client, support for many different archives, and useful visual representations. What sets Unreal Commander apart from other file managers is developer Max Diesel’s dedication to keeping it updated based on client needs. Max recently released version 3.57 — a version that has proven to be even more useful that its predecessors. For that commitment to excellence over more than a dozen years, Unreal Commander earns our Developers’ Choice Award.

File management platform Unreal Commander has enjoyed a longevity that most freeware programs never experience. In fact, the program’s Founder and Creator Max Diesel has updated the file manager thousands of times based on user need, a number that speaks to both its continued popularity and Max’s dedication to continued improvement.

Each unique build has improved functionality, fixed bugs, or addressed other issues to make Unreal Commander better than its previous version. But when he first developed Unreal Commander in 2006, Max had no idea that his software would have such an impact.

At the time, he was working on multiple projects, some of which he scrapped before completion, or found unsatisfactory and discontinued. But one program resonated with him: a simple file manager.

“Unreal Commander’s first public version was in development for several months: from summer to the end of autumn 2006,” Max said.

When Max unveiled it in December of that year, he was initially dissatisfied, noting the program was too small and had an inconvenient interface. But rather than accept its flaws, Max spent the next 13 years improving Unreal Commander, mostly by listening to feedback from devoted users. 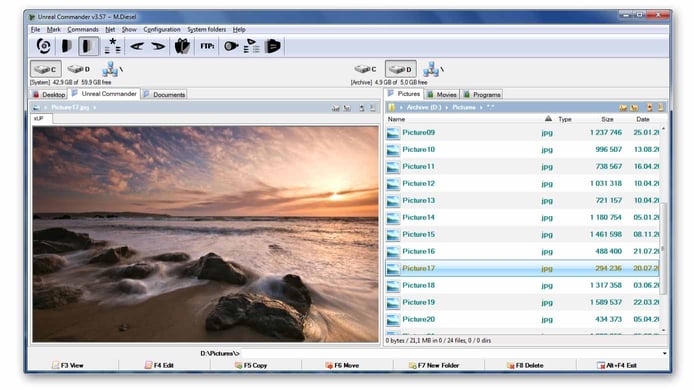 “Every day, users ask me to add new features. Over time and built up, and the program became more user-friendly, in terms of interface, and more flexible in configuration,” Max said.

Today, Unreal Commander includes a two-panel interface that offers a more comprehensive visual display. Further, the file manager supports 12 of the most popular types of archives — including ZIP, RAR, and CAB.

Though Unreal Commander began as a way for Max to develop what he predicted would be a simple tool, his dedication has differentiated the product for users since 2006. For that commitment to quality, Unreal Commander earns our Developers’ Choice award.

Features Include Synchronization and Unicode Support

Over the last decade, Unreal Commander has received awards from many websites that have found the file manager useful. It has received plenty of praise for its interface, its unique functionalities, and file management tools.

The first of Unreal Commander’s out-of-the-ordinary functionalities is its folder synchronization capability that allows users to sync data from two directories and monitor the progress in a two-pane view. And system users can operate multiple directories opened within the interface.

Unreal Commander also differentiates itself from other file managers with its built-in FTP support. Most file managers — especially free ones — can’t connect to remote FTP servers to manage files. The platform also added support for UNICODE, as more programs and operating systems have converted to the popular coding system. 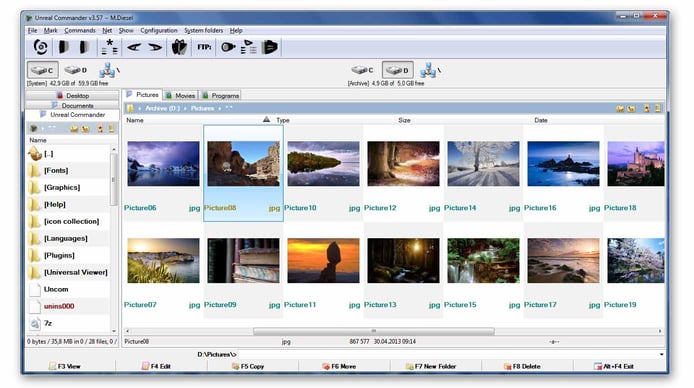 Built-in FTP support differentiates Unreal Commander from other freeware on the market.

Max said he hopes the file manager will attract new users as it continues to receive praise and high ratings from different sources.

Users Benefit from a High Level of Customization

When asked why users continue to use Unreal Commander 13 years later, Max said that the program doesn’t have just one or two valuable features. Instead, different users have different reasons for finding the file manager useful.

“Individual users of the program can appreciate its benefits in their own ways. And different users could provide different answers to why they use it,” he said.

Many find value in the file manager’s adaptability. In addition to allowing so many types of archiving, Unreal Commander also supports WLX/WCX/WDX plugins, includes a multi-rename tool, and enables users to securely and permanently delete files.

Max also said that many users enjoy the recently added virtual disk fx, which allows them to run official installers from popular programs. This capacity to install programs and applications in silent mode will save users time in reinstalling operating systems. 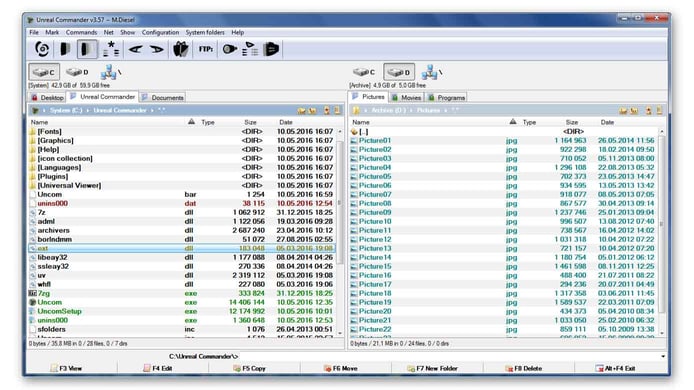 Unreal Commander is highly customizable and attracts users from around the world.

“Unreal Commander allows you to either simply download the installer of one of them, or run the installation of selected programs in silent mode,” Max said.

One review recommends the file manager for its flexibility, noting it allows users to navigate and organize files and folders in a customizable way that stacks up to paid versions from major software companies.

That could be why, when asked to describe the most useful feature of Unreal Commander, Max said the file management system itself is the benefit.

Unreal Commander users appreciate the tools so much that they continue to request versions in more languages. Today, the program is available in 25 languages, all of which have been added by volunteers willing to offer their time to translate the program.

In the 13 years since Unreal Commander was released, the market for freeware and file managers has changed considerably. Still, Max’s commitment to updating the program has kept it a reliable — and viable — option for users.

And he continues to analyze shifts in technology to see how they will impact Unreal Commander. Max notes one recent trend toward Media Transfer Protocol (MTP), which allows users to work with files on devices like phones or tablets, and he wants to add MTP support to Unreal Commander.

He’s also noticed a newfound willingness of users to ask for new features they believe will improve a platform or service. If Max finds a request interesting, he wastes no time working on adding it to Unreal Commander. That approach means he often releases a new update once or twice a month.

But he doesn’t act on every user’s idea for changes. For example, some request highly specialized functions or changes that would only benefit a single user and no one else. Other times, it would make Unreal Commander unduly complicated, which isn’t Max’s goal.

But he’s always on the lookout for the next idea that will help many Unreal Commander users, which is why he’s been updating the program since 2006. Feedback might be the most significant reason the platform has remained viable for so long.

“The wishes of users are always important for developers — especially me,” he said.