the TL; DR: StackPath’s secure edge platform empowers developers to build applications and services at the network edge, ensuring high performance, low latency, and increased control. Because no two workloads are the same, the platform allows users to tailor services to their needs, even mixing edge computing types. As StackPath continues to evolve, the fast-growing company plans to expand the possibilities of what developers can accomplish through distributed computing.

Edge computing has become a buzzword in recent years — and for good reason. The technology, which involves decentralizing and moving processing closer to the data source, can significantly increase cloud computing performance by minimizing the distance it travels, and reducing the amount of data that has to travel within the cloud.

But, according to Nathan Moore, Principal Software Engineer at StackPath, when you have the right tools, edge computing isn’t only about placing a server at the edge of the network in close proximity to the end user.

“With StackPath’s edge technology, we can blend the application logic to expand the capabilities of what your application can do in an incredibly low-latency environment,” he said.

StackPath provides a full spectrum of edge computing options, from serverless scripting to containers to VMs, allowing users to select the edge computing tool that suits their application’s profile with the level of control they desire.

“The edge has taken the industry by storm, and we’ve jumped on it in a major way,” Nathan said. “It’s one of those things where we absolutely have to be competitive. We feel that we are pretty much leading the pack at this point.”

Founded in 2015, StackPath has rapidly expanded its network, merging the technologies of a cast of security and edge computing companies into its platform, including Highwinds, MaxCDN, Server Density, and Fireblade. As StackPath continues to evolve, its goal is to push the limits of what developers can accomplish.

“With serverless scripting, you would use the StackPath CDN itself to terminate your connections, but then we have a Chrome V8 JavaScript Engine running immediately behind the CDN to execute customized logic so that we can determine what it is the CDN server is going to return to the client,” he said.

Nathan said developers can then modify the response to fit their needs before sending it back to the client, thus extending the power of StackPath’s global CDN through custom code.

StackPath boasts an impressive 65Tbps global network with customized hardware, redundant tier-1 carrier connections, and full-stack deployment in each of its 45 edge locations.

The fact that StackPath owns its infrastructure enables the company to offer the products it does, according to Nathan. “The edge platform consists of our backbone network, servers, POPs — we are not sitting on top of anything else,” he said. “This allows us to offer additional benefits.”

For example, customers can choose to allocate an Anycast IP address to VM instances, both for load balancing purposes and to route traffic down the shortest path to end users.

“This is the sort of thing that the platform allows us to do because we already control the network,” Nathan said. “Therefore, we can offer this functionality much more easily than someone who’s trying to do this as a one-off or an individual product. They all fit together. They all intersect.” 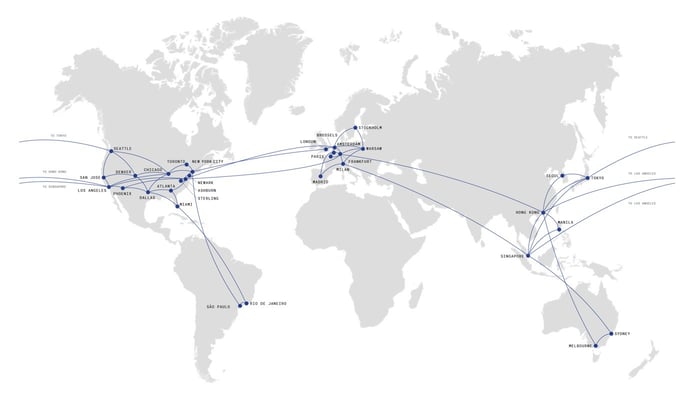 Every edge node in StackPath’s high-performance global network is available to developers at no extra cost.

The low-latency solutions provided by StackPath’s new edge products are beneficial to a wide range of customers, including security technology, IoT, ad tech, and ecommerce. They are also ideal for those looking to facilitate video delivery. Nathan said he didn’t anticipate this use case, but it makes sense, considering that low latency is a must for any type of streaming.

“We even have customers who want to do transcoding at the edge — they want much of their workflow brought in to be processed at the edge itself,” he said. “Moving data back to some centralized data center somewhere would take too long, and their customers could leak their channel unless they move to the edge.”

The services have also attracted customers in the latency-sensitive video gaming space who require almost immediate response times. “Anybody who’s use case is low latency and high bandwidth has to be at the edge,” Nathan said.

StackPath also offers an open API that enables developers to seamlessly integrate the secure edge platform with their products. The ability to merge StackPath with existing workflows makes it easier to scale applications as needed.

“We were very careful in making sure that everything is accessible by API,” Nathan said. “If you want to spin up a new container, you’re not stuck with our user interface. You can take advantage of the API to do that.”

The company provides comprehensive API documentation, tutorials, and resources backed by the support of a network operations center staffed 24 hours a day, seven days a week. Customers are also welcome to consult with other developers and StackPath engineers through the company’s vast developer community.

Features like this are inspired by the company’s devotion to its customers. Nathan himself has recently been working to help a client who runs a performance monitoring site ensure StackPath’s servers will not interfere with his metrics.

“His business is charging other people to measure and monitor how fast their servers are going,” he said. “That means our servers absolutely cannot cause a bottleneck.”

Nathan has devoted a tremendous amount of time to working with his customer to optimize the network. “We are making sure that we are the fastest and best for his particular use case,” he said. “That’s just one example of how our customers drive our efforts.”

Plans for Growth in Step with Market Demand

StackPath has enjoyed phenomenal growth as a result of its new edge products, and the company has no plans on slowing down anytime soon.

According to recent reports, the global edge computing market is projected to be worth $3.24 billion by 2025, indicating significant future growth. “We are paying close strategic attention to what’s going on in the general marketplace,” Nathan said. “Because the edge is so incredibly valuable, we’re going to respond with expansion plans over the next year.”

Nathan said StackPath is at the forefront of the industry when it comes to its servers and networking capabilities and will continue to maintain that quality as the company expands its footprint.

“I think that a lot of the trends are positive, and so long as we keep riding this wave I think we can keep our growth going forward in the foreseeable future,” he said.