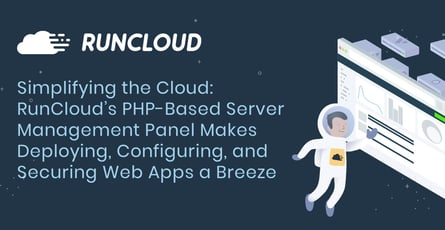 Christine covers the hosting and technology space through in-depth feature articles and interviews with the biggest names in the industry. With more than a decade of experience managing and publishing print and digital publications, Christine leverages her communications skills to keep readers up to date on the latest web hosting services and innovations. Her goal is simple — to distill complex hosting concepts into clear yet thought-provoking narratives suitable for developers and tech newbies alike.

TL; DR: RunCloud’s enterprise-grade platform for hassle-free server management allows developers and digital agencies to focus on coding and deployment rather than sysadmin tasks. The platform, which automates deployment, configuration, and security via one dashboard, currently manages more than 250,000 applications worldwide. Ultimately, RunCloud’s strong team is looking to evolve server management to the benefit of customer workflows across the globe.

The benefits of virtual machines are well-established — they’re highly scalable, allow for a dedicated IP, and provide the precise amount of processing power, RAM, and hard drive space you need for one economical monthly price.

But these benefits typically come with one significant caveat: Since cloud hosting is complex, it’s best-suited for more technically inclined programmers and web designers.

RunCloud is looking to change that with its enterprise-grade control panel for hassle-free server management. With RunCloud, you don’t need to be a Linux expert to build a website powered by DigitalOcean, AWS, or Google Cloud.

And even if you are, the company’s powerful graphical user interface will allow you to focus on coding and deployment rather than sysadmin tasks.

RunCloud is a robust yet user-friendly control panel for cloud servers.

“We want to change the way people manage servers, giving them a sense of freedom when it comes to their jobs,” said Rajendra Zore, CMO of RunCloud. “Whether you’re coming from the WordPress community or a developer background, RunCloud prevents you from getting bogged down with server management.”

Ultimately, the RunCloud team aims to evolve server management so users can build businesses on the cloud both affordably and efficiently.

Making it Easier to Mobilize Servers Since 2016

Arif Tukiman, RunCloud CEO, told us the idea for the company was born once he formed his first software business in 2014 after graduating with a computer science degree.

“We received a lot of projects from government and private sectors to develop websites and custom mobile applications,” Arif said. “When it came to deployments, every single client had their own cloud provider. One might want to deploy on AWS, one on Google Cloud — so we had to manually create our own configurations for every single project.”

The platform allows developers and digital agencies to focus on coding and deployment rather than sysadmin tasks.

That was a painful process, both from the perspective of a developer and the business owner, so the team created an automated solution with a proprietary dashboard. After some polishing, the platform made its official debut as RunCloud as part of the DigitalOcean Community Project. DigitalOcean later used Twitter to praise the project as one of its most viewed in 2016.

In November 2016, RunCloud was released as a preview during JomLaunch4, an event that attracted more than 20,000 members of the Malaysian developer community. By January 2017, the company had released a stable version.

The product became well-liked by its expanding user community and grew organically by word of mouth. In response, RunCloud initiated a Referral Program to reciprocate the positive feedback received.

“We officially incorporated the company in September 2017, and by then, we had already attracted more than 10,000 customers,” Arif said.

Powering Databases, Apps, and Domains Across the Globe

Today, RunCloud manages over 250,000 applications across more than 100 countries. “Our mission is always to simplify server management for businesses and developers,” Arif said.

The company also serves many digital agencies that leverage WordPress, which powers more than 36% of today’s websites through open-source technology and is one of the world’s most popular CMS platforms for building and maintaining an online presence.

“We take the time to talk to the people who are using our product, rather than act like a politician who doesn’t care about people,” Rajendra told us. “In doing so, we found out that in 2018, between 60% to 70% of our users were coming from the WordPress community.”

Rajendra said that, at the end of the day, his main goal is to take good care of his users and stakeholders, no matter how segmented they are.

“We have many WordPress users; a lot are developers, Software-as-a-Service (SaaS) owners, and product owners,” he said. “Every user persona has its own set of requirements and expectations from us, and that’s why it’s so important to communicate and establish ourselves as a customer-centric company.”

RunCloud’s Atomic Deployment, for instance, handles deployment in the background for a zero-downtime solution. Once completed, the platform will atomically switch to the new codebase seamlessly.

Using the solution, customers can deploy countless files to multiple servers, update their websites, and deploy urgent security patches at any time. Users receive instant notifications upon the completion of each deployment, and source control integration makes it easy to keep track of the multiple updates deployed on a server.

“RunCloud allows the usage of Git webhooks with ease,” said customer Akmal Hazim. “I even managed to set up a script to autonomously deploy my latest commit to the production server with some testing enabled.”

In addition, RunCloud’s backup solutions offer the ability to schedule automatic archiving at intervals of your choice, whether that is every half hour or every seven days. Users can retain all backups for up to one month and delete any files as needed.

Users also have the ability to restore backed up web applications or databases to any server, making it easy to duplicate servers when needed. All backups are protected with a 2048-bit SSL encryption, and users get 30GB of backup storage for free with additional space at affordable prices.

Finally, RunCloud boasts a number of collaborative tools allowing admins to invite and manage users without having to share a single login. This way, it’s easy to share a single resource, such as a server, with multiple team members.

On a Mission to Evolve Server Management

Moving forward, the RunCloud team will focus on continuing to tailor its products to the needs of its diverse customer base.

“The day we stop listening to our users and delivering product that suit their needs is the day we fail as a business,” Rajendra said. “Today, we stand as a strong community, product, and company. We have complete clarity on where we want to stand as a product and as a business in the next five to 10 years.”

After further adapting its server management platform to serve the WordPress community, RunCloud will turn its attention to users from digital agencies.

“We plan to provide our agency users with a complete white-label solution for their users — because if our users grow, we grow,” Rajendra said.

Finally, the company plans to come full circle with a return to its community of developers.

“We want to make everyone happy,” Rajendra told us. “Our vision is to simplify server management and deployment — and that applies to everyone, from a personal website owner to an agency serving a small set of clients, to an enterprise-level hosting company, to a developer or founder.”

Christine covers the hosting and technology space through in-depth feature articles and interviews with the biggest names in the industry. With more than a decade of experience managing and publishing print and digital publications, Christine leverages her communications skills to keep readers up to date on the latest web hosting services and innovations. Her goal is simple — to distill complex hosting concepts into clear yet thought-provoking narratives suitable for developers and tech newbies alike.