In the early days, web hosting in Germany was quite expensive when compared with the US and Great Britain. While demand boomed, German customers had few choices — and all were pricey.

Motivated by the large difference in hosting prices in the late ’90s, Martin Hetzner launched one of the country’s first hosting companies. At first, according to International Marketing Assistant Katie Snow, the main challenge included investing in expensive hardware and building the company’s own datacenters.

“People here were using the internet, but they were paying very high prices for it,” she said. “They were either storing things at home or weren’t able to do much with web hosting on their own. That’s where our drive came from.”

Since 1997, however, Hetzner Online has expanded to offer countless dedicated server configurations, along with virtual servers and web hosting in cloud and shared environments.

“Many of our customers have built their business with us,” Katie said. “We’ve had some customers who have been with us nearly the entire 20 years.”

Although Hetzner Online joins many high-end hosting providers in investing in automation, Katie was quick to point out that the company deploys its time-saving systems in its own datacenters, rather than in colocated space.

“A lot of the companies that are getting a bit of an edge on each other are doing as much as they can with automation and making things easy for themselves and customers,” she said.

“They’re learning quite a lot from us, so a lot of our knowledge is being shared across Europe,” Katie said. “We can design our own datacenter, make them as efficient as possible, and we can put in completely new rack systems if we decide to do that. You don’t find that with every company. Some of them can, but a lot can’t.”

That inch-by-inch familiarity with the company’s datacenters bodes well for Hetzner Online’s engineers and system administrators, who have direct input on the hardware designs and configurations installed.

“Because we order such large bulks of hardware, almost all of our configurations are designed for us,” Katie said. “We had circuit boards specially designed for us after the team determined exactly what we wanted.”

In addition to meeting the standards for quality and processing power, Hetzner Online’s custom-designed hardware components must be extremely energy-efficient. Katie estimated that each of the company’s dedicated server configurations is tested to be as eco-friendly and as useful as possible.

“There are no unnecessary components,” Katie said. “We break it down so we have exactly what we want going into our configurations. We don’t want to pay for any extra components, and we can pass those savings to our customers.” 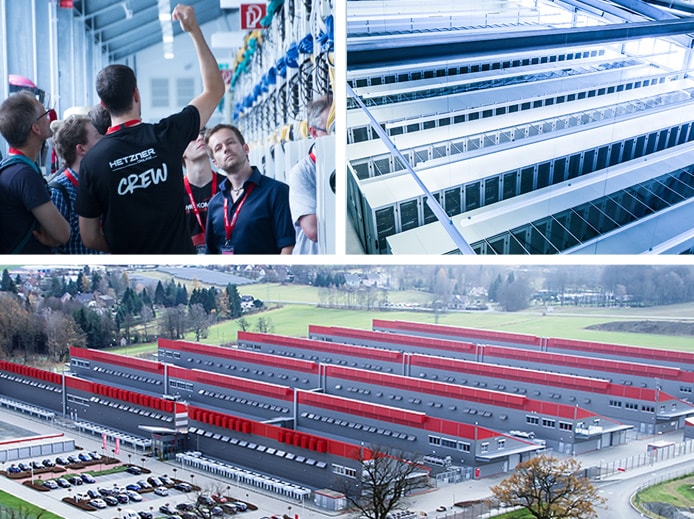 For normal operations, Hetzner Online uses renewable energy from a company that generates electricity from hydropower to power its datacenter parks with zero carbon-dioxide emissions. The datacenter parks’ raised floors are higher than usual, according to Katie, which allows more air to circulate under the server racks.

“We use a direct free cooling system where we channel the air in such a way that the hot air moves out of the datacenter as quickly as possible without actually needing a powered cooling system,” she said, adding the company needs to turn on the air conditioning for only about 25 days a year. “The climate in Finland with our new datacenter is even more open to natural cooling, so we actually may find that we may not need to turn on the cooling systems there at all.”

In addition to low prices, Hetzner Online is also known for a wide variety of hosting configurations that include shared hosting and managed servers to unmanaged virtual and dedicated servers. Because of the large number of unmanaged products, Katie said most of the company’s customers already have some server administration experience.

“They can be anywhere from gamers and private customers who might run a server as a hobby, all the way to very large organizations and hosting resellers,” she said.

When new server generations come out, Hetzner Online offers the older equipment to customers at Dutch auction pricing (prices slowly decrease until someone snaps up the server).

“The auction is one of our company’s most successful experiments,” Katie said. “When we first tried it out, we weren’t sure how customers would respond, but it’s become very popular.”

In addition to the dedicated servers, Hetzner Online offers a range of virtual, cloud, and shared hosting options, along with colocation, storage, and domain name services. The company is poised to break into the public cloud market at the end of January, as well.

Katie, a native English speaker, often looks through social media to converse with customers and prospective clients. Hetzner Online employees from a variety of departments all find ways to contribute to customer support.

“We want our technicians to be able to talk to our customers and know what they’re talking about,” Katie said. “We don’t want to go through some third-party firm or separate department to find out what’s going on.”

Hetzner Online employs roughly 250 people, each of whom may donate a select amount of money to charities of their choice.

“People tend to donate a lot to local charities that deal with education or helping people in poverty, along with international organizations like the Red Cross and Doctors Without Borders,” Katie said. “Our owner really encourages people to get involved in their communities, and it’s an interesting way to get to know what people do or think about in their spare time.”