Woven in Codero's DNA: How a 100% Uptime Guarantee, an On-Demand Hybrid Cloud, and a Culture of Customer Support Breed Success

By: PJ Fancher Posted: June 22, 2016
Follow "The Hosting Blog" daily as hosting experts, programmers, and tech managers go in depth on a variety of tech-related topics.

TL; DR: Codero offers high-quality dedicated, cloud, and managed hosting, but their patented On-Demand Hybrid Hosting is where the 14-year-old company shines. With Codero, customers can manage costs while maintaining, growing, and scaling infrastructure. With a President and CEO who previously launched cloud services at Rackspace and Hewlitt-Packard, Codero is now taking aim at companies like AWS with competitive services and superior customer support — at a fraction of the cost.

Emil Sayegh, a pioneer of cloud computing, was a top executive at major companies such as Rackspace and Hewlitt-Packard and got both companies’ cloud offerings off the ground.

Less than five years ago, however, he left for a company less than a tenth of the size of the tech giants. Codero had already accomplished things he was trying to build at Rackspace and HP.

Codero is the David to the Goliaths of Rackspace and AWS. Emil is an unapologetic President, CEO, and Chairman of the Board who says Codero’s On-Demand Hybrid Cloud Hosting is better and cheaper than AWS.

“Codero had the two things needed to be successful in the cloud hosting business,” Emil said of why he left Rackspace and HP. “The culture of strong customer service plus a culture that wants to automate everything… If you combine these two things, that’s really the prescription for success in any hosting endeavor.”

With a history dating back to 1992, Codero has evolved into a global company with state-of-the-art datacenters attracting the likes of Delta Air Lines, NBC News, and Barclays Investment Bank. Add in customer service scores that rank among those of the likes of Amazon, Apple, Samsung, and Netflix, and the smaller hosting company seems to be out-cooking the big guys on the 2-part recipe of success.

Codero’s team takes pride in their Net Promoter Score (NPS). The hosting industry averages an NPS in the single digits, but Codero’s score of 70 is comparable to Amazon’s and Apple’s scores.

“This is really leading edge,” Emil said. “We measure it every month, religiously. We live by it. Customers constantly rave about the experience they have with Codero.”

Codero leadership insists that all employees, customers, and partners should be treated like family.

The US-based support team is available 24/7/365 through phone, chat, and ticket. Customers can expect a response in less than a minute through phone and chat, and less than 20 minutes through a support ticket.

Codero’s mission is to deliver exceptional service to every customer, in every interaction, with no exceptions. To Emil, reliability is the top priority and key component to Codero’s goal to exceed customer expectations.

The guarantee of 100% uptime is achieved through a combination of what Codero employees do as infrastructure providers, the applications they’ve developed and installed, as well as their ability to anticipate or cope with failure, Emil said. The first thing he did when he joined Codero was “hire the absolute best networking operations team I have ever worked with,” he said.

That included Jason Ackley, Codero’s Chief Networking Officer and Senior Vice President of Technical Operations, who “put us head and shoulders above everyone else in terms of network reliability and performance,” Emil said. “I can’t remember the last time we’ve given a credit to someone in the last year because, frankly, we just haven’t had any downtime that we were responsible for.”

Part 2: Capture the Power of Dedicated with the Flexibility of Cloud

While Codero offers dedicated, cloud, and managed hosting, they really hang their hat on their On-Demand Hybrid Cloud Hosting, an API-driven layer of networking that allows customers to spin up dedicated and cloud servers as needed. 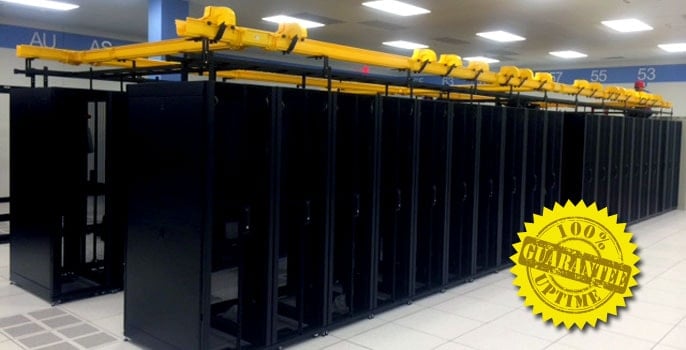 With hybrid hosting, customers can take advantage of both dedicated and cloud hosting.

Codero’s Hybrid Network connects all of a customer’s dedicated and cloud resources without proprietary bridges, software, or complex configurations. The configuration provides on-demand, automated scalability and allows users to take advantage of both the flexibility of the cloud and the power of dedicated hosting.

“It essentially eliminates the whole debate between dedicated and cloud hosting and when to do this and when to do that,” Emil said. “We’re seeing tons of customers that are actually leaving AWS and Google Cloud and coming to Codero because of that option.”

Running a database on cloud services like AWS can be inexpensive if “you’re not very successful or don’t have high demand, frankly,” Emil said. “Once you start to use it seriously, bills are absolutely astronomical.”

The day of our interview, Emil told us about a customer that morning who came to Codero. They had been paying upward of $30,000 at AWS; Codero was able to build and install their entire infrastructure for $10,000.

“Once you scale up with AWS, you get to a point where you’re spending three times as much as you really need to,” he said. “At that point, you’re just better off getting a combination of dedicated and cloud infrastructure encapsulated in a hybrid. If you don’t need to scale, just put your database on dedicated boxes and save a bunch of money.”

Depending on the operating system or image, servers can spin up in a matter of minutes, Emil said, estimating that Linux servers spin up nearly instantly on the cloud and take about 20 minutes for dedicated hosting. Windows machines can take a couple of minutes for cloud hosting and upward of 30 to 45 minutes for dedicated. The hybrid network resonates strongest with eCommerce websites and companies running a Software-as-a-Service platform, which Emil estimated amounts to roughly half of Codero’s customers.

“What we’re seeing, the typical architecture is that dedicated boxes are running databases and then the web applications are running on clouds,” Emil said. “You don’t always have time to wait to manually spin up a dedicated box. You need to be able to scale up and down very quickly depending on your traffic. That’s why we feel hybrid is the ideal architecture.”

Stepping Back: The Evolution of Codero

Codero — originally known as Aplus.net — started in 1992 as a computer reseller shop in San Diego. As the Internet and their business started to grow, Aplus.net morphed into an Internet Service Provider. Next, they added a shared hosting service. Then, it was dedicated hosting, followed by web design services. As if they weren’t doing enough, Aplus.net also added domain name registration.

In 2006, Aplus.net was acquired by Catalyst Investors, a private equity firm out of New York that proceeded to sell off the shared hosting, domain name registration, and web design components.

Catalyst kept the “crown jewels of the company,” according to Emil, and focused the company around just dedicated, managed, and cloud hosting. The investors rebranded the company as Codero in 2009.

Opening New Markets by Getting Acquired

Emil joined Codero in 2012, growing Codero until they were acquired again in May 2015 — this time by BLM Acquisition Corporation, a consortium of 32 regional telecommunications and broadband providers.

With Emil and a bevy of investors spread across the country, Codero is primed to grow.

“The idea is to have these investors become one of our channels to market in hard-to-reach spaces that we can’t reach through direct marketing or more traditional channels,” Emil said.

Spreading Out and Planning Ahead to Ensure Services Weather Any Storm

Currently, Codero is headquartered in Kansas City, with teams also in Austin and Phoenix. Datacenters are located in Phoenix, Dallas, and Ashburn, Virginia. Emil estimated the Codero family is evenly split among support, development, sales and marketing, datacenter operations, and executives. Spreading out the teams in so many specialties and locations across the country is entirely on purpose.

“If an office gets cut off, we don’t want to be cut off from our customers,” he said. “These offices are redundant and are completely able to shoulder the load in case of some weather event or unforeseen circumstances. You have to plan for these things if you are servicing customers whose web presence and infrastructure is mission-critical to them.”

Codero Grows With Narrow Focus on Technology and Support

Even though they’re thriving, Codero isn’t as well-known as the companies they have their sights set on. Even Emil wasn’t familiar with the company when he was approached about the President and CEO opening, according to an article by SiliconANGLE. As he researched Codero, Emil called some of their customers and was impressed with the unanimous rave reviews.

“You have to ask yourself why is this the best-kept secret in hosting?” he asked.

Throughout their 14-year journey, Codero has grown lean, strong, and talented. Now with Emil at the helm, David is bringing the fight to Goliath for hybrid hosting.

“Codero is very different today than it was five years ago,” Emil said. “We’ve been able to capitalize on our two strengths and bring them to life in a way that customers can benefit from.”