By: Roberto Sanchez Updated: May 11, 2016
Follow "The Hosting Blog" daily as hosting experts, programmers, and tech managers go in depth on a variety of tech-related topics.
Email

TL; DR: CMS Made Simple™ is an open-sourced content management solution engineered by volunteer developers and inspired by their frustrations with existing CMS options. Since the project’s inception, it’s powered over 500,000 sites around the world, and we got to hear from this die-hard-for-development team firsthand.

“I came to it by happenstance,” said John Scotcher, an experienced dev and designer referring to CMS Made Simple™ — an open-source content management solution for the dev-savvy and the not. “I started using it, built two or three sites, was very happy with it, started using it exclusively…”

Like many dev folks out there, John had searched high and low for a CMS that would alleviate typical frustrations often felt by both developer and end-user. This particular CMS caters to small sites (up to 100s of pages), taking tasks that would be a bear in WordPress, like taking a static design from Photoshop and coding it out with CMS capabilities, and simplifying them. John found solace in CMS Made Simple™ during the early 2000s — so much so that he ended up joining the ranks of their dev-heavy marketing team in 2009.

CMS Made Simple™ is an open-source CMS solution maintained by a team of volunteer development all-stars.

He wasn’t alone. Many members of the CMS Made Simple™ team came to find themselves developing for this open-source project in response to their dissatisfaction with available content management systems. Together, they form a gloriously geeky and talented army of designers and developers committed to making the ideal CMS for fellow devs and their clients.

CMSMS™: Where End-Users Find Ease of Use & Devs Find Functionality

CMS Made Simple™ (CMSMS™) is a completely open-sourced, PHP-based foundation for building and managing the content of semi-static websites. At its core, CMSMS™ isolates the layout code of the site from the content code, so developers and designers are able to manipulate the site structure without limit while site owners and editors can freely and comfortably manage the words and objects on-page.

Web Designers – Trust That Your Designs Will Translate to Code

John began his story with how he came to “fall in love” with the project — and it had to do with the power it offers folks who are designing a website for a client. Even experienced designers and developers can find the layout design phase of constructing a site to be tedious or exasperating at times, but CMSMS™ makes the transitions from mockup to code to frontend seamless.

“One of the great things from the design point of view is that something that one creates in Photoshop one can say with 100 percent accuracy will look exactly the same when you get to the end website,” he explained. There’s no need to worry whether a design is doable; it’s not only doable, it’s dependable, especially with the help of Smarty: the PHP-based template engine. “You can actually copy and paste any of your HTML codes and just replace the mock content with the appropriate Smarty tags,” John explained, “thus creating a usable template that can be used throughout the site.”

From a coding point of view, CMSMS™ makes it easy to design an intuitive website construction. “The beauty of CMSMS™ is how easy it is to pull modules into other modules by simply using the Smarty tags from one module,” John said.

The mix-and-match ideology of the project is highly favored by experienced developers, but still manageable from the less-code-savvy guy or gal’s perspective. “As somebody who is a non-programmer but perhaps slightly better than the average user as far as technical matters are concerned, it’s very easy for me to figure out how I can mash those modules together by dropping those tags in,” John said, “and get very effective results in a short span of time.”

The community around CMSMS™ is dedicated and ever-growing. Check out the CMSMS™ Forge to see all the existing modules, tags, themes, and templates you have at your disposal; plus you can register your own project to contribute or play around with the module API.

CMS Made Simple™ focuses on the construction and content management of corporate or organization-based websites — cleaning up the coding and design functionality for the folks building those properties. However, the notion of the “Made Simple” part of the project name includes the experience for the user or site owner/editor as well. 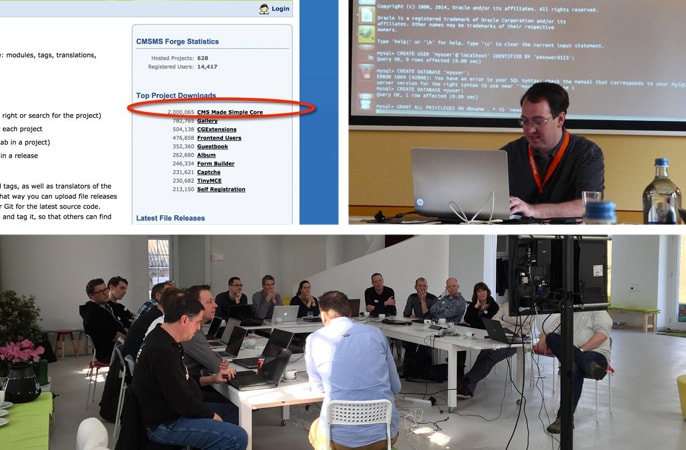 “The idea is we hand the sites over to the site owners and they have total control without having to learn brain surgery to use their own websites, if you will, and do it with ease,” John said, chuckling. The site’s owner, content manager, or editor can easily control the addition or alteration of pages, news articles, galleries, and even products if a certain product module is in use.

John described the project, from an end-user’s point of view, as a less daunting alternative to WordPress or Joomla (with the caveat being that if you’re looking for an exclusively-eCommerce site, there are other options that are probably better suited for you, e.g., Magento). He explained, as an example, that Joomla users often feel “intimated” and fall prey to the assumption that they “have to learn development in order to build a site.” In the case of WordPress, users may often either feel overwhelmed by the options or rely too heavily on WYSIWYG. “A lot of people who use WordPress get the cold sweats when they’re asked to design from scratch,” he said. “So we kind of sit comfortably in the middle: We provide a very easy interface for a user to use but still give them the power to do quite a lot more than they’d be able to do with the average WordPress site.”

All in all, the CMSMS™ team members fall into one of four “camps,” as John explained:

The total in the first three teams fluctuates between 11 and 12 main contributors spread out around the Western world. Anne-Mieke Bovelett, their Director of Marketing, resides in Holland while the Head of Development Robert Campbell can be found in Canada, with another programmer, Fernando Morgado, over in Portugal. John is the only UK-based dev, but he told us the majority of the CMSMS™ clan is Euro-based. They all congregate daily on their IRC channel, with Basecamp projects for each site they’re working on, and break-out meetings via Skype when absolutely necessary. In general, they play the remote development work game exceptionally well.

Each year the CMSMS™ community convenes for some face-to-face time at their bi-annual Geek Moots event. These conferences are held in various locales as the responsibility of hosting the event bounces from team member to team member each year. “It’s my turn to organize it again this year, because I naively volunteered in a moment of over-excitement having already done one a couple of years ago,” John said, later adding with his delightful British accent — “one great advantage of this is it means I haven’t got to jump on a plane.” 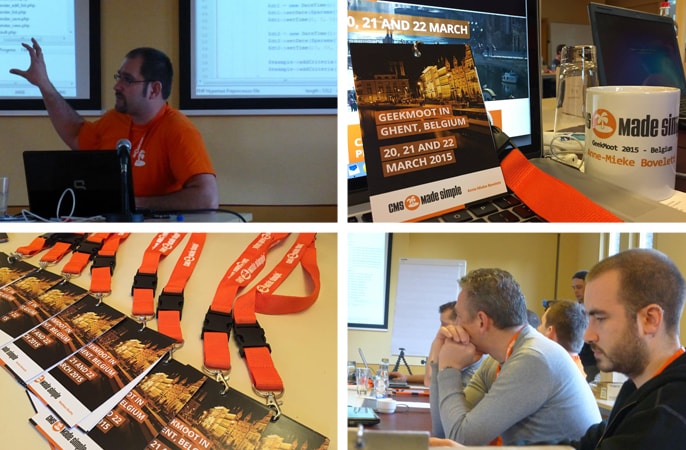 John depicted the events for us: three days’ worth of lectures by dev team members, contributing module developers, and any “community members who feel as though they’ve got something to talk about.” They cap off the conference with a day for users as well — inviting developers to invite their former and/or current clients to come out for a higher level of tactical site-building training.

The big news for Geek Moots 2016: It’s going to be held at the UK Space Center!

If you’re a developer who’s fed up with the limitations of content management systems or a user who finds WordPress and traditional templates to be unnerving, CMS Made Simple™ may be the ideal compromise. Like “website LEGOs,” to use John’s words, CMSMS™ allows web developers to construct an intricate site with code that makes sense — whilst maintaining the integrity of the designer’s vision — and then the content folks have full reign to edit the website’s words, images, and features. It’s completely open-sourced, with a talented team of voluntary devs contributing to its growth, and great for community-based sites or members-only sites that require tens to hundreds of pages. John told us you’ll even find the project used on a few local government and state-level official web properties. Over 500,000 site owners and their developers have trusted CMSMS™ and that number will only rise in the years to come.