By: Sean Garrity Posted: January 16, 2018
Follow "The Hosting Blog" daily as hosting experts, programmers, and tech managers go in depth on a variety of tech-related topics.

TL; DR: Zen Internet hit the scene more than 20 years ago when Founder Richard Tang — in a moment of inspiration at an English pub — decided to build a company to fill a niche in the then lacking UK ISP space. Today, while Zen remains one of the country’s most reliable ISPs, the company has evolved its offerings into an array of data, voice, and hosting services. We recently caught up with Richard, who gave us the scoop on how Zen’s two-decade history positions it perfectly to deliver the communications solutions and infrastructure necessary for success in the highly connected business environment.

In 1995, just a short while after the World Wide Web was launched, Richard Tang was enjoying a drink at a small pub in Rochdale, England, when inspiration struck. Though a handful of ISPs had cropped up around the world, Richard realized the UK had yet to catch on.

He knew this was a golden opportunity to enter the space at ground level, so he quickly got to work and snuck into this exciting new market with his own startup called Zen Internet. Operating out of Rochdale, an old but relatively small town, Richard funded this project with his life savings.

“I saw an opportunity to start a business, so we set it up very, very modestly, with just a few thousand pounds and some dial-up modems,” he said.

From the start, Zen Internet made a name for itself by providing some of the UK’s earliest 64 kbps dial-up service. In just a few short years, the company was given the UK’s Comdex Starlight Award for Best Internet Provider. With an early and promising head start, Zen was already well on its way to becoming one of the UK’s top ISPs.

Zen Internet Founder Richard Tang told us how he grew the ISP from a startup into one of the UK’s leading companies.

When broadband became available in 2000, Zen was quick to offer it within the UK, having connected one of the nation’s very first broadband customers. By the mid-2000s, the organization had grown to over 400 employees and achieved an annual turnover of 14.2 million British pounds.

Throughout its 20-plus years of operation, Zen Internet has received an abundance of praise, along with several awards — including 10 different PC Pro Awards. In the mid-2000s, the company began offering hosting and broadband voice services to expand its catalog. After moving HQ to Sandbrook House and opening a new datacenter, it was able to offer the brand new and lightning-fast fiber-optic broadband service.

And, as another example of Richard’s mission to pioneer the UK ISP space, Zen was responsible for connecting the first FTIC circuit in the UK. In 2016, the company was officially recognized by The Sunday Times as one of the top 100 UK companies and currently has over 77,000 customers.

20+ Years of Maintaining Pace With Tech Trends and Client Needs

Ever the entrepreneur, Richard realizes that much of Zen Internet’s success can be attributed to its ability to adapt and innovate. Not once, but twice, Zen Internet was among the very first to provide the latest internet technology the UK had to offer.

“A lot of this is driven by market trends where we’ll see an opportunity and think, ‘Yeah, we’re going to go for that,’” Richard said.

The current incarnation of Zen includes not only internet service, but hosting and broadband voice capabilities, as well. While Zen is quick to adopt new strategies, the selection process is rather strategic and is based on factors such as funding and compatibility with Zen’s core values. 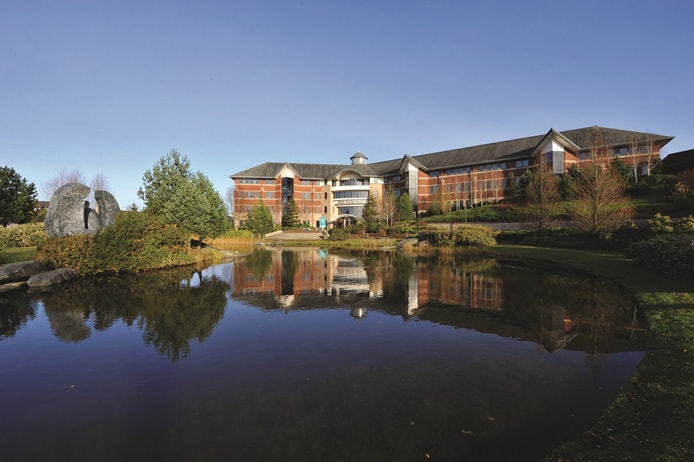 Zen Internet’s headquarters are nestled in the famous Sandbrook House in the heart of beautiful Rochdale, England.

“Over the years, there’ve been so many situations where we see 10 different opportunities to go after,” Richard said. “But we sit down as a management team and think about how many of those we can really do justice to.”

For example, Richard mentioned that the decision to offer hosting voice services took a great deal of planning and resources to implement. There was also some risk involved, as VOIP (voice over IP) took several years to catch on. In the end, Zen had made a wise choice, as the new offering has gained more traction since its implementation.

Zen is more than just a typical ISP — its wide range of services makes it an ideal partner for many UK businesses. SMBs often employ more than just hosting service, and, with their tighter budgets, the opportunity to get multiple services from a single provider makes a great deal of sense.

“One of our differentiators is that we’re a one-stop shop,” Richard said. “Because we’ve done what we’ve done, you can get connectivity from us, as well as your domain names, cloud, broadband, IP VPNs, and voice solutions.”

Because it offers several professional services under one roof, working with Zen is convenient. It means better support, as the level of expertise remains consistent across multiple services. It also means greatly simplified billing, making budget planning much easier.

“It’s quite compelling for businesses to have one supplier, one account manager, and one relationship,” Richard said. “Then you’re not in a situation where your connectivity supplier blames your hosting provider or vice versa.”

While Zen Internet makes it a point to adopt the latest and most cutting-edge internet technology, some of these changes come with inherent risk due to the unpredictability of future trends. Richard told us one of most recent shifts involved the cloud, which he compares to VOIP.

“Cloud is a bit like VOIP in that people talked about it like it was the next big thing,” Richard said. “In more recent years, it’s definitely taken off. From a hosting point of view, the cloud is the #1 significant game changer.”

Cloud computing helps businesses save money, time, and other resources through virtualization.

Cloud hosting has become extremely popular due to its versatility, with the vast majority of hosting companies offering it as a valuable asset for online presence. Zen’s services include both Windows- and Linux-based hosting equipped with antivirus and anti-spam protection, as well as forum, blog, and eCommerce support.

The Zen Internet team is a quirky bunch of techies bent on helping customers realize their online business goals.

“Looking at hosting generally, the ability for people to build an online presence has been really notable,” Richard said. “If you owned a website back 10 to 15 years ago, you were straining to use coding to build what you needed, and these days it’s so easy to go online.”

Zen offers SMB’s the full range of hosting essentials, including shared, dedicated, and cloud options complete with eCommerce, CMS, and security features. And SSL certificates come as part of every web hosting package.

As do most hosts, Zen Internet allows site owners to easily build their online presence with little technical expertise. Although Zen is of a jack of all trades, its hosting services are more versatile than some specialized hosts, letting customers pick the perfect package for their business, whether it’s a professional Windows-based cloud VPN, or an affordable shared hosting package with an open-source content manager.

Embracing a People-First Approach Has Been the Key to Success

From the beginning, innovation has always been at the forefront of Zen Internet’s business model. This, however, goes beyond merely adapting to trends for the sake of procuring lucrative business opportunities. As a provider of multiple services, Zen’s core purpose is to provide the best internet technology to fulfill the needs of its many different customers.

“We’re not beholden to shareholders,” Richard said. “What that has allowed me to do with Zen Internet is to create a very strong culture where people are first, and money is second.”

The combination of its people-first attitude and innovation is the formula for Zen’s more than two decades of success. With all the attention Net Neutrality has received in 2017, it is refreshing to know that one of the UK’s top ISPs respects the privacy of its customers and is strongly against the sale of personal user data. In 2008, Zen declined an offer to partner with the advertising company Phorm, which was interested in purchasing user data from the provider. Instead, Zen has built up a great deal of trust and enjoys a very happy and loyal customer base.

“What I tell everyone is that whatever we do, we should ultimately contribute to one of these three objectives,” Richard said.

As one of the first ISPs to offer self-install ADSL, Zen has designed its business to be independent and reliable, even offering leased lines and collocation opportunities to SMBs. As a result, this well-rounded service provider is making the lives of business owners and homeowners easier.