TL; DR: In the early 2000s, Vodien Co-Founders Alvin Poh and John Jervis Lee realized there was a gaping hole in the Southeast Asian hosting market. Most of the large providers serving the region were unable to guarantee reliable uptime, and personalized support was entirely lacking. That’s when the duo decided to create a solution. Since 2002, Vodien has been delivering the infrastructure and hands-on customer service its customers require to succeed in the competitive online marketplace. We recently sat down with Alvin, who told us how Vodien continues to prioritize speed, stability, security, and support, to advance its mission to bring cutting-edge hosting technologies to all corners of the map.

In 2002, the options for hosting were rather limited, leaving many site owners no choice but to partner with one of the few giant hosts of the day. Unfortunately, the impersonal corporate environments of these large providers often made customers feel lost in the fray and treated less like individuals and more like the nondescript numbers on their support tickets.

Hosting was especially scarce in Southeast Asia, as most of the prominent hosting providers were located in North America, Europe, or Australia. Meanwhile, a couple of aspiring university students in Singapore were planning to launch their own customer-centric hosting company that was set to change the rules.

Alvin Poh and John Jervis Lee were attending university in the early 2000s while moonlighting as web design specialists. The duo had quickly built up a loyal customer base and began hosting some of their design customers as an additional service. At the time, Alvin and John were partnered with a number of hosts through reseller plans. In their short span of reselling, however, the two noticed a number of shortcomings in both the general and local market.

“As resellers and customers ourselves, we realized that there were a lot of problems with the hosting business,” Alvin said. “There were several hosting companies, but no one could provide good customer support or reliable uptime.”

“We would even have several hosting companies that we would work with, just because we found that we couldn’t rely on any one company,” Alvin said. “After learning that, we decided to take the plunge and start our own hosting business.”

The pair’s creation, Vodien, would ultimately go on to become one of Singapore’s most popular hosts, serving thousands of websites worldwide and earning ICANN and APNIC accreditations.

With more than 15 years of hosting experience under its belt, Vodien has witnessed many exciting tech trends — most notably, the widespread adoption of cloud computing and virtualization. With virtualization, scaling became easier than ever, allowing hosts to turn a single physical server into multiple virtual environments.

“When we discovered virtualization, we knew that it was the way going forward,” Alvin said. “All our servers have since been virtualized for ease of management and scalability, which has helped us tremendously.” 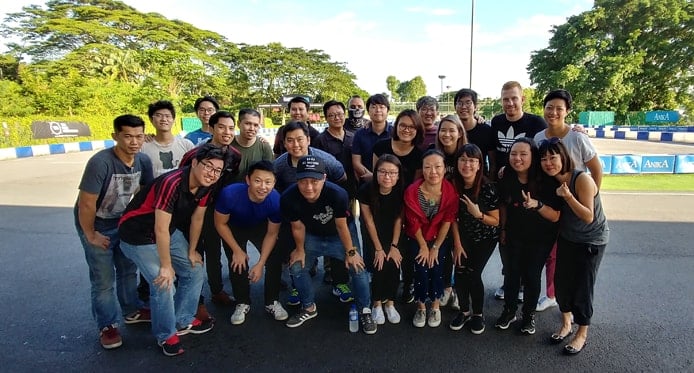 Vodien’s team of passionate IT pros is dedicated to evolving product offerings alongside advancements in technology.

In addition to keeping current with trends, Vodien has continuously re-invented its infrastructure. Slow service and unreliable uptime were among the major reasons Alvin was dissatisfied with the early hosting market. As technology advanced and Vodien’s client base grew, old hardware would be continually replaced.

“500MB disk space plans were more than sufficient in the past, but, these days, 5GB plans are the minimum,” Alvin said. “As a hosting provider, this changes the way the backend infrastructure is handled in terms of disaster recovery, backups and restorations, and speed of I/O.”

Specifically, Vodien has replaced all HDDs with SSDs to improve performance in recent years. SSDs provide many advantages over traditional hard drives — including a significant increase in read/write speed. In addition, SSDs lack the moving parts present in HDDs that are prone to failure. By implementing better hardware, Vodien has been able to provide some of the most reliable hosting in Singapore.

When Alvin and John founded Vodien, they envisioned a well-rounded host that was not only affordable, but one that also prioritized reliability, performance, and customer service.

“As hosting customers before and as business owners now, we know that other business owners have a ton of stuff to be concerned about — hosting shouldn’t be one of them,” Alvin said. “That is the reason behind our Four Ses of Speed, Stability, Security, and Support.”

Alvin told us Vodien’s philosophy is centered on the Four Ses: Speed, Security, Stability, and Support.

With a history in web design, Vodien has always been very familiar with its clients’ needs regarding uptime and hands-on support.

Although it is headquartered in Singapore, Vodien has clientele across the globe, meaning help is available no matter where the customer lives. Regarding performance and reliability, Vodien’s constant upkeep of infrastructure reassures clients that their data is sufficiently backed up and that — in the rare event of downtime — sites can be restored quickly.

Alvin and John were inspired to start Vodien to better serve their clients and improve the local hosting scene. With a passion for innovation, the duo was able to breathe new life into the Southeast Asian hosting space.

“Vodien has a strong culture of creating and innovating to solve real-world problems,” Alvin said.

As a result, Vodien now has several teams responsible for evaluating market trends. After enough info is gathered, the teams identify the pros and cons of embracing each trend. If an idea sparks enough interest, it will then be subject to feasibility studies. Finally, these ideas are turned into real solutions to meet market demands.

Since 2002, hosting technology has changed drastically as servers have gotten bigger and faster, hosting more and more websites on increasingly compact hardware.

Vodien’s efforts to stay speedy have certainly paid off — its local market share had reached 12.46% in 2014, and continues to expand. 2014 was also the year Vodien became an ICANN accredited domain registrar, making it one of only three accredited registrars in Singapore — and one of 11 in Southeast Asia.

As a result, Vodien is capable of registering numerous domain name extensions, including .asia, .biz, .info, .net, and .org. With near-instantaneous domain registration capabilities, Vodien enables businesses to quickly get a foothold in creating their online presence.

Up Next: A Partnership to Bring Cutting-Edge Tech to a Wider Market

Although Vodien primarily serves the Singaporean market, it has gathered a vast, international clientele over the years. With customers throughout Southeast Asia, Western Europe, and even the US and the UK, Vodien currently hosts thousands of domains on its servers. As part of its plan to expand further, Vodien has recently begun partnering with Dreamscape Networks.

“One of our biggest developments happened in July 2017, where Vodien merged with Dreamscape,” Alvin said. “As a group, we can leverage each organization’s strengths to expand into Southeast Asia through a combination of organic growth and acquisitions.”

Dreamscape, centered in Dubai Internet City, is an LLC that seeks to expand tech-related business opportunities globally. Dreamscape helps budding businesses establish and grow their online presence with a wide variety of brands, ranging from web design and marketing companies to domain name registrars and cloud hosts. Among other recent acquisitions by Dreamscape are a number of Australian companies, including registrar Enetica and hosting provider Webcity. By consolidating many service providers into one entity, Dreamscape helps these localized companies tap into a broader global market.

“Vodien is going to be the dedicated hosting brand of the group, and we’re very excited at what the future holds,” Alvin said.

“Being firsthand customers of the hosting industry, we know the common problems customers face, and we created our business to solve those problems,” Alvin said.