RoadToBlogging.com: How Istiak Rayhan Makes the Journey Easier for Bloggers Through Trusted Advice and Recommendations

By: Sean Garrity Posted: May 6, 2019
Follow "The Hosting Blog" daily as hosting experts, programmers, and tech managers go in depth on a variety of tech-related topics.

TL; DR: Istiak Rayhan started a blog for fun, but, as he learned more about the medium, he developed strategies to generate revenue from his posts. As his expertise evolved, he created RoadToBlogging.com to help other bloggers turn their passions into a full-time profession. He begins by advising them to keep track of SEO best practices and to diversify their site content because search engines regularly update their algorithms. And Istiak continues to develop tools to help bloggers grow their presence on the web, including many new WordPress plugins.

In 2012, Istiak Rayhan founded the technology blog TechThumbs.com as a passion project. Initially, he wrote because he loved the subject matter and didn’t make any money off the site.

But soon, he became interested in learning more about Google AdSense and affiliate marketing. He took the lessons he had learned and started to write about them on his blog. After posting about his newfound passion for six months, he realized that his mission had changed. He wasn’t running a technology blog anymore.

That’s when he founded RoadToBlogging.com.

“I was sharing my blogging journey. As I figured out how to make an income from blogging, I showed my readers exactly what I was doing,” he said. 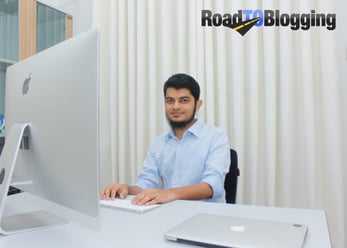 In 2014, Istiak got his first big payout from an affiliate program. It was more than he had ever earned before. At the same time, he learned about the blog ShoutMeLoud, run by a man named Harsh Agrawal.

“He was sharing his income reports, and I saw that he was making almost $12,000 every month through his blog,” Istiak said. “I realized it was possible to make money through blogging and he inspired me to think seriously about turning it into a full-time job and helping others.”

In 2015, he began focusing on increasing the quality and quantity of his posts to grow his reach.

Today, Istiak runs RoadToBlogging.com full-time, and he shows other bloggers how they can turn the hobby they love into a profession. Whether he’s discussing productivity tips or guiding readers through technical questions, he has created a space where bloggers can dream big and plan successful futures.

Why New Bloggers Turn to Istiak to Help Build Their Audiences

Although anyone can create a simple, do-it-yourself blog and write a few posts a week, sophisticated bloggers know that the mechanics of developing a successful site with a broad readership are incredibly complicated. That’s why a detailed and well-organized road map is so helpful. At RoadToBlogging.com, Istiak and his team don’t just churn out content — they helpfully arrange posts into categories, so readers can easily find what they need.

The first of those categories is search engine optimization (SEO), a skill that all new bloggers need to master. If bloggers want readers to find their sites, they’ll need to ensure it appears high in web search results. Knowledge of SEO is what can make that happen, and RoadToBlogging.com is full of insightful SEO strategies and tips.

RoadToBlogging.com offers guides for site owners who are new to affiliate marketing.

Then there’s the social media component. While search engine results are vital, no blogger can afford to ignore social networking sites like Facebook or Twitter. Connecting with the right communities can mean quickly developing new audiences. RoadToBlogging.com explains how to hone these powerful tools.

Istiak, a noted WordPress expert, said it is essential for bloggers to understand WordPress functions and features. RoadToBlogging.com’s posts on WordPress, which powers 30% of all websites, cover everything from choosing plugins to installing themes. The category is a valuable and regularly updated resource for any blogger.

Finally, there’s the category that may be closest to Istiak’s heart — affiliate marketing.

In the early days, affiliate marketing content was one of the main drivers of traffic to the site.

Professional bloggers are acutely aware of the ebbs and flows of traffic from search engines. While many people turn to social media to try and drive more traffic, most blogs rely on Google to keep visitors coming.

“Things have changed a lot since I launched this site in 2012. Back then, there wasn’t much competition,” said Istiak. “Now, there’s nothing but competition. Every day, it’s harder to get traffic from search engines.”

Istiak Rayhan covers many SEO topics in-depth, including how to bolster content to improve search rankings.

Trying to determine how Google’s algorithm works — and the changes it makes in its updates — has become a cottage industry. With small additions, subtractions, or tweaks Google can impact countless businesses. That’s why it’s so essential for bloggers to stay on their toes. If they’re not continually updating SEO practices, their sites are bound to get buried at the bottom of search results.

Even RoadToBlogging.com isn’t immune to these changes.

“It’s impossible to predict how the algorithm might evolve,” said Istiak. “Last September, RoadToBlogging.com got hit by a surprise Google penalty. Fortunately, by working hard and ascertaining exactly why Google had dinged us, we earned our traffic back by March.”

Istiak has found many strategies that help him stay a step ahead of search engine algorithms. The first among them is diversity. In addition to RoadToBlogging.com, he has launched three other blogs — HostLater.com for online business owners; WPLeaders.com for WordPress users, and SetYourOffice.com for office interior design.

“Even though I’ve been running this blog for more than six years, there are still so many things I want to do. It’s hard because I’m the main guy who runs the site and have to do 80% of the work. I’ll always blog, but I’m also really excited about a plugin business that I’m launching,” he said.

A Future Focused on the Power of Plugins

Istiak’s journey began with a tech blog passion project and has taken him deep into the complexities of SEO and helping other bloggers thrive. But his next step will be in the plugin space with resources found on Ultimate Blocks.

Plugins are the perfect way to complement the blogs that Istiak already runs. After all, he wants to help bloggers, and plugins are pieces of easy-to-use technology that make blogs more efficient and reader-friendly.

“I wanted to go into the plugin business with my younger brother, so we launched a plugin called ‘Ultimate Blocks,’” Istiak said. “It’s for the type of people who read my blog — bloggers, affiliate marketers, and content marketers. We worked very hard on it, and I’m really excited.”

RoadToBlogging.com is developing WordPress plugins that aim to make life easier for bloggers.

The plugin is designed for WordPress’ Gutenberg, its latest editor, and it makes the platform more powerful than ever.

“It’s the future of WordPress. Honestly, I don’t even understand why anyone still uses the classic editor. Everyone will have to move to Gutenberg sooner or later,” Istiak said.

Whether he’s writing an informative post on one of his blogs or developing a powerful plugin, his goal is to keep his readers and users on the web’s cutting edge. And RoadToBlogging.com informs bloggers who need to stay on top of the web’s ever-evolving changes.