TL; DR: With more than half of the Fortune 100 trusting Rackspace to deliver complex managed public and private cloud services, along with dedicated and virtualized server hosting, the company enables established enterprises to move with the agility and accuracy of tech-minded startups. CTO John Engates, who has been with Rackspace since nearly the beginning, shared how the company pioneered deploying custom architectures and hands-on customer service. Following a return to private business operations after almost a decade as a publicly traded company, Rackspace is recapturing its reputation for energetic strength and charisma.

Like other ISPs-turned-hosting-providers in the early days of the web, Rackspace started off by concentrating on connecting and deploying dedicated servers. It wasn’t until receiving a particular phone call that the company’s CEO and three Founders recognized another path to long-term, sustained success.

“A customer called in and was basically begging for help and in tears with our CEO on the call,” according to Chief Technology Officer John Engates. “They had lost data, they were down, and they were desperate for help for their website.”

“There was a real opportunity for us to do more than server builds and datacenter management, but also the operating system patching, upgrades, and fully managed services,” John said. “That’s really what sparked Rackspace.”

From there, the company coined Fanatical Support™, a phrase created by then-VP of Customer Care David Bryce, who brought in a straightjacket and told Rackers — the company’s name for employees — that they needed to be fanatical about the way they supported customers. The mindset resonated with employees as a rallying cry to build a culture around satisfaction, engagement, and expertise. The company’s highest award is the Fanatical Jacket Award, given to one employee each month.

Today, Rackspace has 6,000 employees around the world, 3,000 of who are engineers with roughly 2,600 certifications in leading technology platforms, including Amazon Web Services, Microsoft Azure, Google Cloud Platform, and VMware. The company has more than a billion server hours managing OpenStack, which Rackspace created with NASA — all while boasting customer satisfaction rates that lead the hosting industry.

Three students at Trinity University, who created and grew an internet service provider in San Antonio, wanted to wire one of the city’s high-rises for internet connections. The owner of that building, Graham Weston, recognized the potential of the team and eventually became an investor, CEO, and Chairman of the what eventually became Rackspace.

Rackspace CTO John Engates has seen the company grow because of its focus on superior hardware and support.

At the time, getting a server or website online typically meant connecting to the internet through a dedicated connection or using emerging colocation services. The Rackspace founders not only wanted to provide the datacenter space and connectivity of colocation facilities, but the servers and hardware, as well.

“That was a relatively novel idea back then — that full spectrum of hosting capabilities,” John said. “They took the business even further by offering these turn-key hosting services in a very short period of time.”

Rackspace aimed to deploy infrastructure within 24 hours of a customer placing the order. Dell was turning heads by allowing customers to customize their own PC or laptop online before the company shipped the computer directly to the customer. Rackspace applied the same principles to web hosting, according to John, who joined the company in 2000.

“You were able to tweak the configurations, push the go button, and pay your fee,” he said. “Less than 24 hours later, you’d have a custom dedicated server online with full root access and administrative privileges.”

Because web hosting was so fresh, most early Rackspace customers were novices and unsure of how to use various programs, languages, and databases to get a business website online.

“Linux was an emerging phenomenon at the time, and most people were new to internet technologies in general,” John said.

The hosting providers of the day offered very little customer assistance, according to John, and telcos largely staffed support centers with loosely trained employees who were encouraged to direct callers to a website or other online resource.

“Rackspace went the other direction,” he said. “Instead of shoveling you off to a web page or telling you we wouldn’t do any of the work for you, we staffed up and added more people.”

According to John, the company created the concept of a dedicated account manager and lead architect that would direct the Rackspace response to customer problems. Account managers and lead engineers organize teams that act as extensions of the customer’s in-house IT employees, often holding weekly calls or occasional in-person visits.

“There’s a whole array of technical people you might have an interaction with at some point, but we wanted to provide the customers with a sense that Rackspace was a small organization and not some giant, anonymous call center,” he said. “Customers have access to people who know them by name, know what their business does, and really take on the responsibility for the customer’s success.”

“We can see where the customer was located, what datacenters they use, how much money they spend, and how satisfied they were with the company,” John said, “Ultimately, we want to get a full picture of our customer on one screen of one tool.”

After more than two decades of success and roughly a decade as a publicly traded company, John said he feels a renewed energy at Rackspace after the company was acquired by Apollo Global Management and returned to private business operations.

“For a little while, we weren’t quite sure what we were, who we were, or where we were headed,” he said. “Hosting is a very competitive space and when your footing is changing so quickly, it can be hard to navigate.”

Under the leadership of new CEO Joe Eazor, Rackspace has acquired Datapipe and TriCore Solutions.

According to John, Rackspace observed customers increasingly adopting a multi-cloud approach, using a mixture of managed hosting and public and private clouds to host and protect applications. The diversity of technologies presented a complex challenge for companies to deepen and extend their competencies and capacities for providing managed services around multiple products.

“Customers are no longer using just one technology platform for their IT needs,” John said. “This, however, is where Rackspace has found its footing — as a managed services provider with expertise across the board. We just want to help our customers run their technology in the most effective way, and we have the breadth and depth of expertise and partnerships with key technology players to make that happen.”

John said Rackspace’s transition back to an independently owned company has enabled it to make faster decisions and act more nimbly — attributes he also identifies as the biggest advantages Rackspace delivers to customers.

In addition to welcoming CEO Joe Eazor, Rackspace has turned heads with the recent acquisitions of TriCore Solutions and Datapipe, two companies that support and expand the host’s focus on premium managed services. TriCore Solutions concentrates on support for enterprise applications from the likes of Oracle and SAP, while Datapipe competed with Rackspace on managing public and private clouds. Both acquisitions were the largest in Rackspace history.

“Those are big changes to the company, both in terms of adding quite a bit more talent and capability to Rackspace, but also doubling down on our focus on managed services,” John said. “All of that has really provided a lot of excitement in the company, both internally and with our customers, about what Rackspace is up to. It feels a little like we’re getting back to our roots.”

Rackspace goes beyond traditional, impersonal customer satisfaction surveys by making the Net Promoter Score an integral part of how the company tracks internal and external morale.

“All of that has really created a culture of customer service that was unique at the time and us still leading-edge in this industry,” John said. “We continue to have low customer churn relative to our peers and high rates of satisfaction and engagement.” 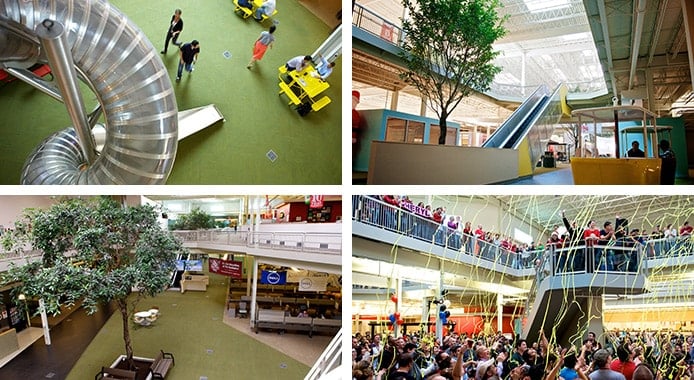 Rackspace’s headquarters, located in San Antonio, are in a converted shopping mall.

Instead of just tracking the willingness of customers to recommend Rackspace to others, the company also uses NPS questionnaires to gauge employees’ perceptions of other business units, training programs, and working environments.

“We discovered early on that you can’t have happy customers without happy employees,” John said. “We tried to build out programs to drive positive results in terms of employee engagement.”

In addition to the various educational and social opportunities, John attributes much of the positive work environment to the office space as a whole. Company headquarters are located in a 1.2-million-square-foot former shopping mall that was renovated to look different from most corporate settings.

“When a lot of our customers come here, they tell us that it looks like a crazy place to work but a lot of fun,” he said. “That fun is part of our secret sauce. You have to make sure they have a great place to come to work and that they work for good managers. Everything has to support that whole chain of events that lead to great customer interactions, otherwise, that weakest link is going to be your downfall.”