TL; DR: Many people who’ve shopped around for a virtual private server (VPS) solution to run a website or application have probably experienced sticker shock. Depending on the resources needed, users can pay hundreds of dollars a month for VPS hosting. But LowEndBox seeks to change that. The website delivers an online marketplace for users of all types — from developers and businesses to bloggers and gamers — to get up and running on virtual private servers for less than $10 per month. We recently caught up with Daniel Spritzer, LowEndBox’s Marketing Specialist, who told us how this online storefront is helping budget-minded site owners power their web projects with minimal financial overhead.

There is no doubt that the web has taken over as the preferred method to communicate with modern audiences. For businesses and entrepreneurs looking to get a brand off the ground, having a website has become a prerequisite for success. In fact, by the end of 2017, more than 70% of small businesses had a website, and that number is forecast to grow to nearly 95% by the close of 2018.

But it’s not just small businesses that are looking to get up and running online. Developers, bloggers, gamers, and job hunters all seek web hosting solutions for their varied online purposes. And many of these users share one thing in common: tight budgets.

Powering websites and applications with virtual private servers (VPS) has long been seen as something reserved for businesses with deep pockets, as hosting rates can run hundreds of dollars per month. But the folks at LowEndBox decided to let everyone in on a secret: It doesn’t have to be that expensive.

“LowEndBox was created to allow hosting companies to advertise budget web hosting products to consumers, and the max price was initially $7 per month,” said LowEndBox Marketing Specialist Daniel Spritzer. “Today, $10 per month is the max for VPS.”

LowEndBox serves customers who don’t want to spend too much on hosting and don’t need all the bells and whistles that come with managed VPS packages. This online marketplace gives users exactly what they’re looking for: a low-end box — or barebones VPS — with full root access.

LowEndBox isn’t a hosting service unto itself. Instead, the site offers a connection between hosting providers with low-end offers and the customers looking for them. The site lists virtual server deals for less than $10 per month and also showcases shared, reseller, and dedicated hosting packages with bargain-basement pricing.

“LowEndBox is the most popular deal website for hosting services,” Daniel said. “Our readers get great deals from a large variety of hosting providers.”

One of LowEndBox’s featured providers, ChicagoVPS, regularly submits specials on its services to the site’s marketplace. The host’s most recent offer is a $6-per-month Windows VPS package that includes 2GB dedicated RAM, 50GB disk space, KVM, and 2TB of bandwidth. ChicagoVPS is also promoting a KVM Linux VPS plan for just $5 per month.

And that’s just one provider’s deals. Another popular host, HudsonValleyHost, promotes a number of bargains on LowEndBox. Perhaps one of HudsonValleyHost’s most popular packages is its Windows VPS plan, which gives LowEndBox readers access to 3GB of RAM, 60GB SSD space, KVM/SolusVM, and more for only $7.50 per month.

But Daniel told us LowEndBox goes beyond just delivering deals.

“Visitors are able to read about latest trends, updates, vulnerabilities, products, and anything else tech related,” he said. “It’s a one-stop shop for any tech enthusiast.”

Why might you want to host your website on 64 MB of RAM VPS for only $5 per month? According to the LowEndBox team, there are five good reasons.

“Because you are cheap.” If you don’t have $49.99 per month to power your blog, small eCommerce site, or other website, you need another solution. For many would-be entrepreneurs with good ideas they want to bring to market, the cost of hosting can be a barrier that keeps their dreams in the dirt. And hobbyists looking to power blogs, forums, and fan sites are left out in the cold by the high cost of hosting.

“Because you are frugal.” Hosting packages include a ton of features and applications to attract the widest possible customer base. Rarely does any one customer use all the features included in their big box hosting package. Going with a low-end box means fewer bells and whistles you may never need. 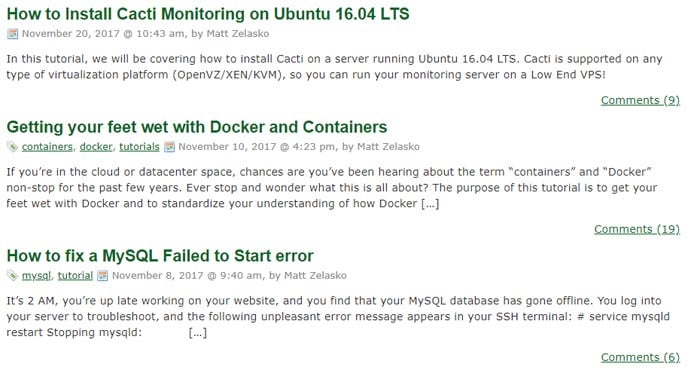 If you have questions or need more info, LowEndBox’s tutorials and community are there to help.

“Because you are bored.” Part-time developers and enthusiasts love to try out new code and systems, maybe leading to the eventual development of an app, maybe just for the fun of the activity itself. Budget-friendly low-end hosting enables greater and more frequent experimentation and play because of the lower overhead.

“Because you want to learn.” The stripped down nature of the average low-end box offers the opportunity to learn and explore in ways that the more often locked-down big box hosting packages can’t. Moreover, making a mistake and trashing a $5 per month VPS is much easier to swallow than trashing a $500 per year box.

“Because you want to brag.” Low-end boxes provide a do-it-yourself environment where the only real limit is how much you can cram into the drive space, RAM, and other resources of the server. For many, that provides a challenge akin to the hot rod customizers of the 1950s and 1960s. And, like those long-ago grease monkeys, modern code monkeys like to brag about what they’ve gotten to run in minimal resources.

Serving a Wide Audience: From Gamers to Businesses and Developers

Daniel told us LowEndBox serves a diverse range of markets.

“Target users would be tech hobbyists or users that employ the VPS services for fun or testing,” he said. “Another group of users we target are bloggers who need to host their blog or website.”

A low-end VPS makes for a perfect testing or staging environment before moving a site or application onto a production server. Those building their own applications or customizing an open-source script also often use such low-end boxes for development, however long development takes, without high cost. A low monthly rate is especially important to hobbyists, such as the aforementioned part-time developers, as well as home-brewed internet radio stations, personal craft stores, and blogs.

LowEndBox requires that all deals submitted be under $10 and ensures all offers are credible.

“The user base ranges from teenagers wanting to play games all the way to business professionals who need to host a website or be close to a stock exchange for a good connection,” Daniel said.

Different hosting providers making offers through LowEndBox maintain their servers in different physical locations around the globe. For gamers and stock traders, having a server physically near an outside server or person to which it connects can provide a competitive advantage. It may be milliseconds, but when trying to “pwn the n00b” or buy shares before someone else can grab them, milliseconds can mean success or failure.

Daniel said he’s observed a rise in competition in the market. And, while that’s sometimes a good thing, it can be detrimental in the hosting space.

“As technology has improved and become more efficient, the budget hosting market has become more competitive,” Daniel said. “This has pushed prices down and has started the race to the bottom. These budget services have made is easy for abusive users to obtain service. Types of abuse include spam emails, denial of service attacks (DDoS), phishing, and hacking.”

First, many of the low-end hosting packages promoted by LowEndBox include built-in DDoS protection, anti-phishing measures, and other safeguards. LowEndBox also helps educate readers about the threats and ways to protect themselves through a robust selection of tutorials, which also covers everything from how to install KVM to managing your servers via SSH.