TL; DR: Lenovo is giving datacenters a competitive advantage through its unique approach to server builds. Because the entire process, from design to manufacturing and deployment, is done in-house, Lenovo is able to build servers at a lower price point, provide improved quality control, and offer more pointed input on product direction. The Lenovo team is excited for the upcoming launch of a redesigned server portfolio, which will homogenize components across the product line.

IT professionals know the importance of maintaining a low cost of ownership for their infrastructure. For enterprises running large workloads for multiple clients, it can be challenging to reduce expenditures over a server’s lifetime.

LYNX Computer Technologies, Inc. is no stranger to this issue. The company was having difficulties providing high availability for its wide array of clients, including 42 law firms, multiple school districts, and a number of townships in Pennsylvania.

To solve these problems, LYNX turned to Lenovo to upgrade their server farm. After only a few hours running Lenovo’s ThinkServer systems, LYNX’s team realized the solution was going to work and provide long-term benefits.

“We know these ThinkServers are going to stay up,” said Michael Roberts, Technical Sales Manager for LYNX. “Our customers know it, too.”

Lenovo’s provides datacenters this type of competitive advantage for one crucial reason — server builds are done completely in-house, which dramatically lowers cost, helps improve quality control, and allows the team to steer the trajectory of the product line. As a result, end users are directly impacted with solutions that meet their specific needs without breaking the bank.

With the upcoming launch of a redesigned server portfolio, which standardizes parts across the product line, Lenovo is sure to continue its dedication to providing value for both SMBs and enterprise-level businesses.

Business Development Executive Les Roach and his team moved over to Lenovo when the company acquired IBM’s server business. Les noted one of the biggest hurdles he faced at IBM was the perception that the company’s servers were too expensive for certain types of customers. And, to a degree, that was the case. Though, when the business moved over to Lenovo, there was an immediate shift in cost.

“The day we started at Lenovo, my cost to build a server dropped significantly,” Les said.

This decrease in expense was due to a number of reasons. Part of it came from not having to pay the soft costs associated with a giant like IBM. However, the biggest impact was a result of how Lenovo approaches the build process.

“We have some advantages over other competitors in that we do all our R&D, product design, and manufacturing in-house,” Les said. “If you go buy a Dell or HP, they may have some part in the design, but they spend a lot of time doing design with an ODM abroad who is building the server for them.” 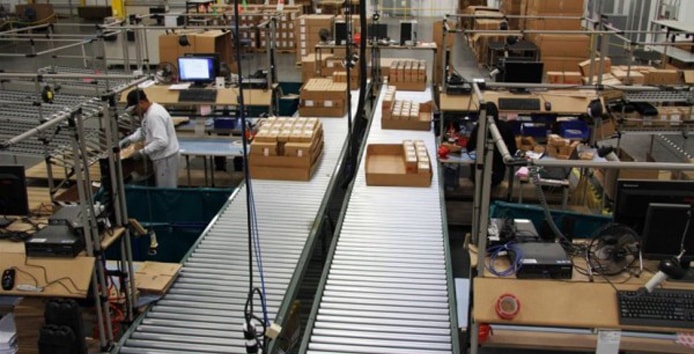 Lenovo manufactures all of its servers in-house, which saves more than 30% on build costs.

Lenovo acquires parts from Asia and delivers them to its manufacturing facility in North America. All of the design and manufacturing is done internally, which has allowed Lenovo to tighten QC and scale builds more efficiently.

“The added bonus is security,” Les said. “We don’t have a third party handling our firmware — it’s all developed in-house, digitally signed, and kept under lock and key at Lenovo.”

Lenovo is also able to lower costs on server builds through relationships with vendors. Because of the scale of Lenovo’s PC business, the company can negotiate lower prices on every component of a server.

“Lenovo is Intel’s biggest consumer of processors, and as a result, I get much better supply lines and costs,” Les said. “The same falls for memory, hard drives, and everything that goes into a server — right down to the screws.”

All of this translates into cost savings for the end user, giving datacenters, hosts, and cloud providers — and any business employing Lenovo servers — a better competitive advantage.

Redesign of Entire Server Portfolio With Offerings for Any Price Book

Les and his team are excited about the launch of their completely redesigned server portfolio this summer. When the server business transitioned from IBM, Lenovo had a legacy server business geared toward SMBs with ThinkServer, but the company really hadn’t penetrated the enterprise market. The acquisition of System X changed that, and Lenovo essentially had two product lines — one directed at small businesses and one focused on the enterprise.

Les told us this summer’s launch is set to merge the two.

“We’re going to do a clean-slate redesign of our entire server portfolio,” he said. “You’re going to see all new models, new form factors, some denser offerings, and new branding. It won’t be System X or ThinkServer. It’ll have a new look and feel but keep the base-level engineering.”

In fact, the changes are so big, Lenovo views it as a relaunch of their entire server business. There are no longer two product lines, but, as Les noted, there will be offerings housed under one roof for businesses in any price book.

“It’ll be a complete, end-to-end portfolio,” he said. “If you have a host who’s currently buying a single-proc E3 basic server, we’ll probably have two flavors of that. There will be a lot of choices.”

Another big focus for Lenovo zeros in on software-defined technologies. Talking with professionals across the industry, Les found many hosts are looking to diversify their businesses.

For companies wanting to offer managed services or go into other areas, Les told us Lenovo’s software-defined technologies are a good fit.

Lenovo’s relationships with storage providers, such as Cloudian, Nutanix, DataCore, Nexenta, and StorMagic, provides customers with choices instead of locking them into a single solution.

“Unlike HP or Dell, we don’t have a giant legacy SAN business to protect,” Les said. “Rather than trying to pick one and acquire it, we’re partnering with all these industry leaders to provide our customers with greater choice.”

On the Horizon: Investigating Component Manufacturing

Already experiencing the numerous benefits stemming from manufacturing servers in-house, Lenovo is now looking at the potential benefits of manufacturing some of its own components.

“We’re investigating the possibility of manufacturing some of our own components, but that may be a few years out,” Les said. “This is something that’s on the horizon and what our senior leadership team is contemplating.”

As Les noted, this would result in even further cost savings and improve the efficiency of server builds. It will be interesting to watch what Lenovo will bring in the years ahead.