TL; DR: US Dedicated was built with a focus on providing robust support and high-quality hosting infrastructure to businesses. Its solutions include private cloud, VPS, and dedicated servers that benefit clients around the country — from gaming companies to large corporations. The company’s redundant network connections and efficient DDOS protection process ensure that customers don’t experience service interruptions or latency. And, thanks to its high-quality, reliable nationwide network, US Dedicated can offer customers a 100% network uptime service level agreement.

Server downtime is more than an inconvenience for many companies; it can lead to massive financial losses. According to a survey from Information Technology Intelligence Consulting, 98% of organizations indicated that a single hour of downtime costs them more than $100,000. And 33% of those enterprises reported up to $5 million in annual losses due to downtime.

That’s why so many businesses are turning to dedicated servers to maintain security and high uptime rates by not having to share resources and take on risk. Entrepreneur Robby Hicks served a subset of those businesses when he founded End of Reality, a dedicated server company that catered to video game developers. He saw a need in the gaming industry for hosting infrastructure that could handle its high demands.

But as End of Reality gained popularity, it needed to upgrade its infrastructure to serve its growing client base. That’s when Robby took his idea to the next level and formed a larger venture that would ultimately become known as US Dedicated. Today, the company oversees operations in six major metropolitan areas: Los Angeles, Chicago, New York City, Seattle, Dallas, and Atlanta.

As he was building the company, Robby sought out the highest quality infrastructure, not just the products that would result in the largest profit margins. He decided to differentiate US Dedicated by partnering with the best providers, a philosophy he developed from his time working solely with gamers and game developers.

“If something is good for gaming, then it’s good for any other application,” Robby said. “This is partly due to the price point of what gamers want — which is the absolute best of everything at the lowest price.”

And that translates well to the business world, where efficiency, uptime, and cost are the main factors in choosing a hosting company. So far, the results for US Dedicated have been positive client experiences and a rapidly growing customer base.

One of the biggest challenges Robby found in the gaming industry was the massive amount of distributed denial-of-service (DDoS) attacks that come with the territory. That’s why he decided that US Dedicated would solve the DDoS problem for clients from the outset.

US Dedicated handles DDoS mitigation much differently than most hosting companies. The company begins by filtering all attacks inline which can identify threats headed to any part of the network in real time.

US Dedicated has on-premise & in-line 480GB DDoS mitigation capacity at each of its datacenters. This ensures that each upstream internet provider that enters its network is fully protected & scrubbed before ever hitting the US Dedicated edge routers, resulting in best-in-class DDoS compliance. And while many hosts, especially those that offer value services, can survive an attack, a business can still be slowed to a crawl by dwindling internet speeds.

DDoS may only take servers offline for a few moments, but, during that time, many hosting companies reroute all calls, connections, and traffic to low-bandwidth scrubbing centers. That approach makes data streams slow, gaming connections poor, and voice calls choppy.

But, in the case of an attempted attack on US Dedicated servers, the internet is filtered over premium bandwidth rather than shifting to cheaper options. Robby said that is a significant selling point for businesses that not only need to maintain uptime but also need to reach customers fast.

One of the biggest challenges Robby faced early on was keeping the price point down for his customers while also maintaining high-quality infrastructure. But that commitment has paid off as more customers have switched to US Dedicated for its superior reliability.

US Dedicated’s gaming-grade infrastructure lays the foundation for its success with customers and is built to handle any possible spikes in traffic. According to Robby, the company’s servers are so powerful that customers are often hooked instantly.

“All it takes is for a person to try our services once,” he said.

And those who are on the fence about committing to a new host often try the service on a monthly basis before signing a contract when they’re comfortable. US Dedicated boasts a 100% conversion ratio with those who have tried its service.

Another big selling point for US Dedicated is that it uses 12 different internet providers at each of its six datacenter locations. It analyzes performance metrics every 45 seconds to determine the most efficient internet connection based on latency and packet loss. That ensures data is always routed quickly and securely.

US Dedicated has six datacenters located in major metropolitan areas across the United States.

“No matter what, our customers are getting the absolute best internet connection based on performance — not based on cost,” Robby said.

This approach is antithetical to the common practice of cost-based routing that customers find at many other dedicated server companies. Those companies provide value by using the cheapest connections and only routing to a more expensive provider in the case of an emergency.

But high-quality infrastructure is just one pillar of US Dedicated’s successful business model. The company also believes in serving its customers through a robust support staff and providing an uptime guarantee that eliminates any doubt about its commitment.

Committed to Customer Service with a 100% Uptime SLA

Robby said he had been a customer of practically every single host on the market, and found they all lacked the right amount of personal service. That’s why he designed the customer support system at US Dedicated as another differentiator. And it all starts with the contract.

Tired of the run-around he received from other hosts, Robby ensures his company’s commitment to customers is apparent from the beginning. That’s why US Dedicated provides a 100% network uptime service level agreement. If something goes down, the company informs the affected customers immediately and credits them for their downtime. 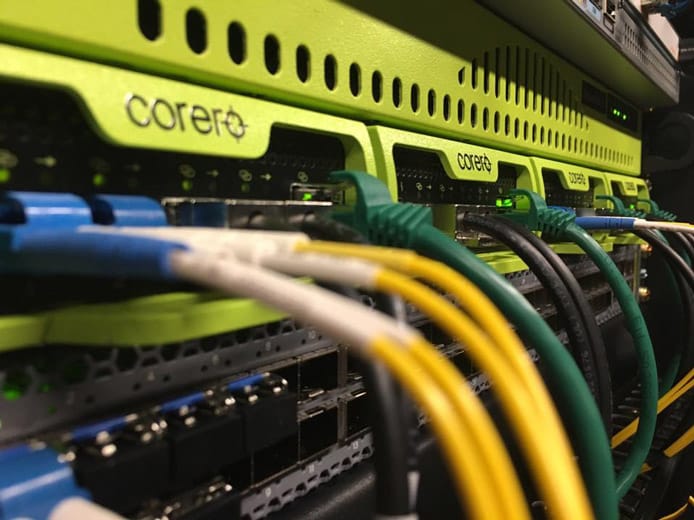 Customers of US Dedicated enjoy a 100% uptime guarantee written into their service level agreement.

US Dedicated also doesn’t employ any sales representatives. Everyone at the company — Robby, the engineers, and the operations team — are so confident in the quality of its offerings that they believe the products sell themselves.

The team doesn’t build products with the hope that customers will need them. Instead, US Dedicated designs products around what its customers need now.

“You can’t just throw up a bunch of servers and hope people buy the product. You need to react to their real-world business needs,” Robby said.

And its SLA, service, and product design philosophy are why US Dedicated enjoys an almost nonexistent customer churn rate.

“We’ve had one or two customers drop us, but they came right back,” Robby said. “They saw what was available on the open market and were begging to return to US Dedicated after three months.”

Expanding its Reach With Managed Service Partnerships on the Horizon

When Robby decided to transition from gaming servers to the broader dedicated hosting market, he wanted to provide high-quality infrastructure, affordable services, and a straightforward SLA. By staying true to those commitments, US Dedicated has built a loyal following of customers who benefit from gaming-grade servers and a 100% uptime guarantee.

And US Dedicated is looking to provide more options to customers by launching a partnership with a managed services provider to deliver a new managed website hosting package.

And US Dedicated will continue to improve its hosting services by focusing on what users need. As so many online businesses lose money due to server downtime, US Dedicated is committed to ensuring that its customers don’t experience any.