HostingCon "Behind the Scenes" — Energy Circulates as the Team Anticipates a Broader Networking Pool for Hosts, ISPs, Telcos, & VARs

By: Alexandra Leslie Posted: May 26, 2016
Follow "The Hosting Blog" daily as hosting experts, programmers, and tech managers go in depth on a variety of tech-related topics.

TL; DR: If you’re in the hosting, cloud, or web industries, HostingCon Global is like your NYE celebration. Each summer’s event marks the kickoff of a new year of growing partnerships, business, and revenue. We all remember the first time entering the Exhibit Hall floor — the buzz of tech-related chit-chat and the energy pouring out of folks who are truly passionate about their fields. We know of our experiences leading up to the big event, but what about the folks putting on the show? Penton’s Andy Grider gives us the latest HostingCon headlines — featuring the team’s anticipation of more telcos, more MSPs, and more opportunities for all.

I remember walking into the Exhibit Hall for the first time. The energy was humming as chatter about virtual machines, cloud computing, and next-gen hosting echoed from wall to wall.

Overwhelmed and excited by the activity, my eyes darted about the room before quickly locking in on my first memory from HostingCon 2015: a server challenge going on at the SoftLayer booth. Competitors were tasked with switching out hard drives in one of SoftLayer’s server racks. They were timed, and the competition was palpable. I heard later that the victor finished in less than a minute flat. Insane.

For a few moments, I was magnetized to the SoftLayer booth. By the time I had snapped out of my trance, I was well on my way to being sucked in by the next display. I’ve since learned that that’s what the HostingCon Global Exhibit Hall is: a gloriously geeky array of technical challenges, web host chit-chat, and unbelievable networking with the people who matter in the hosting and cloud industries. If you’re a member of the hosting, web, cloud, telco, and/or ISP communities, or just a fan of all things techy, the HostingCon events are must-be-there affairs. 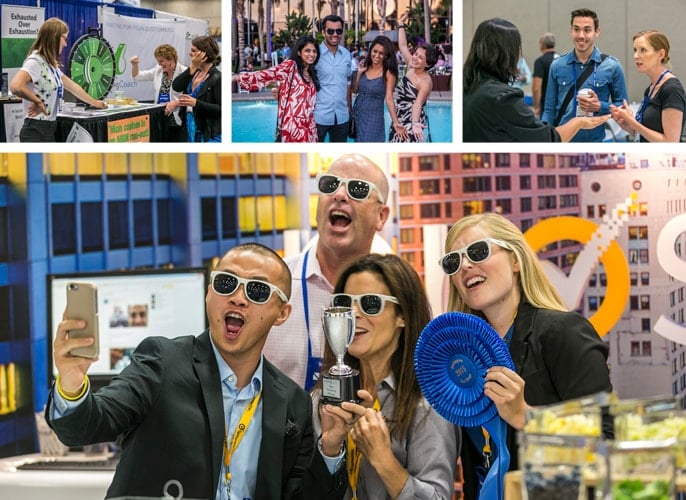 With the Penton acquisition came Penton’s huge audience. The HostingCon team eagerly awaits their arrival in 2016.

Just before last year’s event, the HostingCon family was acquired by Penton, a world leader in industry trade shows and business engagement. Penton’s User Marketing Manager and our #1 liaison for all things HostingCon, Andy Grider, gave us the rundown on this year’s event and the wider audience of opportunists we can expect to find post-Penton expansion.

As this beloved trade show event has grown, so has the team behind it. With the acquisition by Penton came Penton’s large audience of telcos, VARs, and MSPs. Managed service providers and telcos have always been a part of the HostingCon attendee list, but Andy told us the team’s expanding the event’s reach to appeal to these audiences more.

“Penton’s technology portfolio includes quite a few leading content brands that are supporting the show this year, including MSPmentor, The VAR Guy, and Talkin’ Cloud to name a few,” Andy said. “In terms of audience, expect to see an overall larger audience this year with exponential growth in MSPs, VARs, and telcos at this year’s show.”

Capitalize on Even More Opportunities for Business Growth After Hours

We’ve said it before, I’ll say it again: HostingCon is the place for web, hosting, and cloud industry leaders to rub elbows with fellow industry decision-makers. Hardware vendors can connect with web hosts and ISPs. Software companies can find IT folks. Tech junkies can talk tech jargon. It’s beautiful. The networking opportunities don’t end in the Exhibit Hall either.

After hours, you’ll want to be sure to take full advantage of the opportunities to be had in the four networking events. Technically, there are usually four official events hosted in the evening by HostingCon, plus the can’t-miss, unofficial HostingCon event that’s actually put on by the WHIR, and many more partner-sponsored events to be announced as the show gets closer. These are the venues where deals are closed. You’ve spent the day browsing booths, making small talk, and throwing your elevator speech at anyone who’ll listen — now’s your chance to kick back with an adult beverage in hand and talk shop in an even more relaxed setting.

The behind-the-scenes folks at HostingCon are AWESOME at putting together the ideal venue for those industry players to get to know one another, form those professional partnerships, and grow their businesses as a result. Last year, they kicked off with an audience-interactive game show and a keynote. 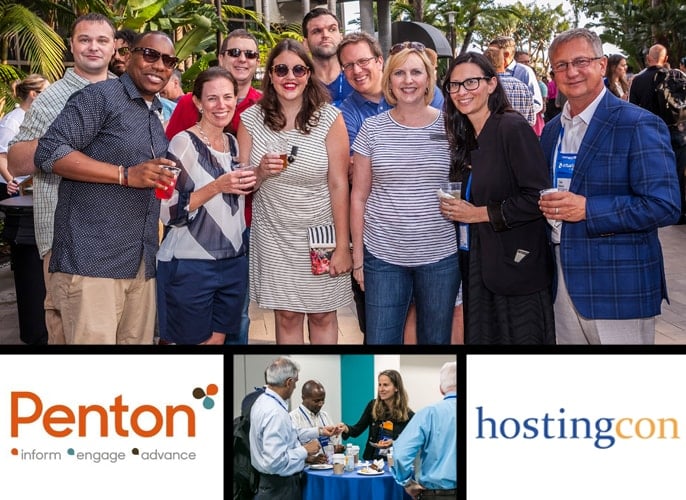 Andy told us to expect a return of the HostingCon Global Game Show, and he shared a personal excitement for the keynote address this year. Andrew Blum, author of the book Tubes, which discusses the “physical side” of the most intricate and seemingly intangible information hub, the Internet, will be kicking off the conference as 2016’s keynote speaker. “I think the book appeals to the alpha geek, which I think our audience is,” Andy said with a laugh. “Everyone cares about all the behind-the-scenes stuff that makes the Internet work — and I think his presentation’s going to be pretty cool.” It’ll be four days’ worth of exhibiting by day and networking by night.

Not to be left out, the WHIR Networking Event is an additional gathering that’s really made a name for itself in the HostingCon community. One of several community get-togethers hosted by the Web Hosting Industry Review each year is held during and in the same city as HostingCon, since the conference is a melting pot of WHIR audience members and thus the perfect locale for a get-together like this.

“Last year, in San Diego, we had the most people we’ve ever had at a WHIR event,” Andy told us. “There were over 400 people at the event, with a pretty long line to get in.” Our team remembers the same — the snake of techies wrapped around the corner in the heart of downtown San Diego.

Andy recalled the awe of his team as that event was unfolding: “Typically, we may have a line of 10 or so maximum — but we had people lining up an hour before the event started and the line got pretty long. We were thinking, ‘What is going on?!'”

A collective chuckle echoed through the speakerphone as we all reminisced on the success of last year’s event in general. Don’t be daunted by the line, though, Andy assured us. “We have a plan: If you come wearing your badge, we’re going to let you come to the front of the lines and not make you sign in or anything.” Sounds like a plan to me.

If you have yet to register for HostingCon Global, you have until June 10th to claim the Early Bird Rates! Regular Rates take effect on the 11th.

Registration is open through the last day of the event in New Orleans, Louisiana.

“Typically, this audience registers so late that they leave us sweating until the last minute,” Andy said, chuckling. Don’t be those guys — go ahead and secure your spot at the world’s leading conference for hosting and cloud gurus.

If you’re in these industries, you won’t regret it. If you’re not, you’ll still probably have a LOT of fun… but no promises on the business benefits.

The HostingCon Team Is Counting Down the Weeks, Days, Hours…

This summer, that familiar energy will come rushing back as I gear up in anticipation of our favorite hosting event of the year. Come July, we’ll start scheduling meetings with web hosts, cloud experts, and other web leaders who’d like to rendezvous at the show, and come the month’s end, the HostingAdvice crew will be packing our bags.

“In the weeks, days, and hours before HostingCon, all of the HostingCon team members are busy finalizing the last-minute details of the show,” Andy summed things up for us. “Although it’s very hectic, it’s also very exciting as we work to finalize the final details and see all of our hard work come to fruition.”