By: Sean Garrity Updated: April 30, 2018
Follow "The Hosting Blog" daily as hosting experts, programmers, and tech managers go in depth on a variety of tech-related topics.

TL; DR: Founded in 1999, Fasthosts has a long history of delivering top-tier web hosting products as well as dedicated and cloud server solutions to customers around the globe. Today, the company is continuing its tradition of helping businesses scale their digital properties with a new focus on containerization. Fasthosts General Manager Simon Yeoman told us that containerization is more than just the latest IT trend. The technology has emerged as one of the most effective ways to overcome business challenges related to cost, resource allocation, and safe cloud computing — benefits Fasthosts customers are realising every day.

When many hear the word containerization, images of shipping containers come to mind — the vessels stacked on top of one another at a shipyard waiting for their contents to be unloaded by eager dockhands. In the IT space, container technology can be seen in much the same way.

Virtual containerization keeps applications running separately in isolated environments, similar to a VM or sandbox. Although fully fledged containerization has only been in use since 2000, the technology behind it had its start in 1979 when the chroot system call was implemented into Unix V7 and BSD in 1982. Nearly two decades later, FreeBSD jails were created for use in shared hosting, followed by Linux VServer.

With 2004’s Oracle Solaris Container came the ability to use cloning and snapshots, features that would later be available in popular VM software such as VirtualBox. The following years would see the release of Google’s Process Containers, LXC, and, eventually, Docker — a name that would later become synonymous with container technology. In more recent years, Docker has helped popularize containerization among software developers and other professionals. And UK-based hosting provider Fasthosts has seen the technology steadily increase in popularity.

“In the years to come, the adoption and movement of containers will likely continue to accelerate,” said Simon Yeoman, General Manager at Fasthosts.

Fasthosts has been an advocate for innovative web solutions since its inception two decades ago. And, as Simon told us, containers represent the latest effective technology to promote growth for businesses online.

Today, more than 10 million domains have been registered with Fasthosts. The company has won several awards and launched its own next-generation cloud platform known as CloudNX. By building on Docker technology, Fasthosts seeks to bring the next generation of virtualization to clients.

Fasthosts recognizes that businesses are faced with a number of challenges on the path to success. Competition, overhead expenses, and often limited dedicated resources — both in terms of hosting as well as expertly trained staff — all present barriers to growth. These issues can be magnified for SMBs, who often have significantly smaller staff and budgets.

On the other hand, large enterprises may experience uneven skill sets across their wide range of departments. Not only must online businesses account for hosting costs, but also costs related to server maintenance, security, hiring, training, and more.

As a result, Fasthosts aims to be much more than a simple hosting provider. Fasthosts’s business clients are better equipped to overcome challenges involving technical expertise.

By investing in and testing its internal container-based platform, Fasthosts is able to hone its expertise and provide the best service possible to customers.

“We can be our own guinea pigs by using the platforms ourselves internally,” Simon said.

Why SMBs & Enterprises Are Adopting Containerization

Virtualization is a revolutionary technology that multiplies the power of computers. As the latest form of virtualization, containerization technology offers a number of unique advantages over traditional methods, making it an increasingly popular solution to many business problems.

The host OS shares read-only versions of its kernel, binaries, and libraries with the container. As they are much lighter than a traditional VM, containers are favored for their speed, flexibility, and compact size. Able to boot up in mere seconds, containers can be used within a variety of environments and require the management of only one shared operating system at a time.

An increasing number of organizations are adopting container technology because of its flexibility and security.

Many businesses already use cloud applications, and the adoption of containers is quickly becoming a popular choice for lightweight operations. Nowhere is this more apparent than in the software development industry, where easy testing and deployment greatly reduce project time.

“Software or online-oriented organizations can benefit from the additional agility, speed, and dynamism that it gives you over the more traditional stacks,” Simon said. “It enables you to set up an environment for your software team a lot quicker.”

Since many of these software products are then used by other industries, such as retail and banking, the adoption of container technology means smoother operations for everyone.

A Container-Based Cloud Platform Suitable For a Variety of Applications

“At the moment, we use some of the underlying container technology for our offerings,” Simon said. “In our cloud offering, we’ve got a Managed Stacks and Applications product and a container-type platform.”

This platform is capable of running pre-installed projects, such as WordPress, in a way that allows for flexible, yet dedicated resources and lightning-fast speeds.

Fasthosts’ utilisation of Docker makes its CloudNX platform the perfect environment for customers to run containers.

“Strictly speaking, we don’t have a container operant at the moment, but we do have our CloudNX Managed Stacks and Applications, which are powered by our container platform,” Simon said. 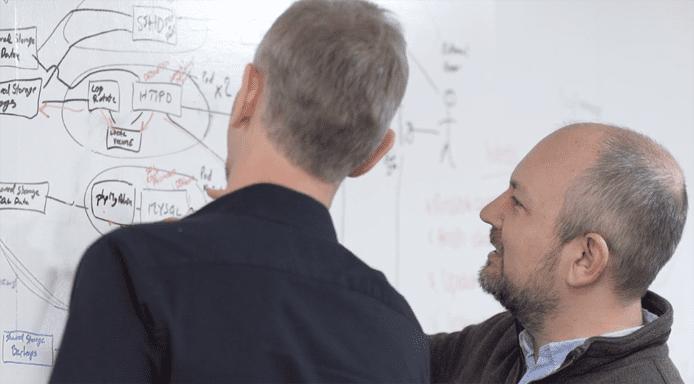 CloudNX is Fasthost’s next-generation cloud platform that allows users to take full root access without the worry of maintenance. Clients get access to stacks and applications in a dynamically scaled cloud environment managed by Fasthosts. In the meantime, developers can quickly create custom stacks within minutes using services like MySQL and PHP.

Aside from development, container-based clouds are useful to a wide variety of business types. Practically any organization that relies on heavy computing power benefits from running multiple simultaneous systems and apps through virtualization.

For example, the popular animation studio Pixar can take up to 100 hours of CPU time to render a single frame of animation, leading to stunningly long rendering times for even short films — which would far exceed 100 years for a 90-minute film. Since large corporations, such as Pixar, need to meet strict project deadlines, the need for multiple machines working simultaneously in a cluster becomes obvious. The more virtual machines and containers used by a business, the more it can cut down on CPU time.

Since the early 2000s, containerization has been a hot topic in the tech world. Because virtualization allows multiple operating systems and environments to exist on one physical server, it has a huge range of use cases — all of which reduce business overhead. Even more compact are containers, with their small size and limited packaging allowing for many more instances per server. Much more than just the latest trend, containerization is changing the way organizations do business by saving time, effort, server resources, and physical space.

Although specific services and features are yet to be announced, Simon eagerly anticipates Fasthosts continuing adoption of container technology — as well as the company’s future innovations — citing 2017 as a highly influential year for containerization.

Kubernetes is an open-source platform built for the automated management of containerized apps. Looking at the road map for 2018 and beyond, Fasthosts seeks to make containerized environments more accessible — just like the cloud has become in recent years. With heavy investments in container technology from the likes of Microsoft and Google, virtualization’s latest buzz is starting to take root in the mainstream tech space.

Since 1999, Fasthosts has provided the UK with a variety of quality services, including shared, dedicated, and cloud-based hosting. For the last two decades, Fasthosts has experienced rapid growth due to its innovative approach to server-based technology, with over 1.4 million domains currently hosted and receiving recognition from Microsoft on several occasions. At Fasthosts, it’s all about leveraging the latest technology to allow businesses to conduct operations in the fastest and most reliable way possible.