By: Christine Preusler Posted: August 20, 2020
Follow "The Hosting Blog" daily as hosting experts, programmers, and tech managers go in depth on a variety of tech-related topics.

TL; DR: Driver Easy is an essential tool for Microsoft Windows that scans machines for outdated device drivers before automatically updating them. The software, leveraged by 3 million users worldwide, is supported by a database of more than 8 million drivers. Driver Easy’s intuitive interface, customer-centric development process, and sheer effectiveness have made the tool a fan favorite for more than a decade.

In April, after cleaning up the messes of two quarantined adults and one child, our old dishwasher took its final breath. For months, my husband and I revisited our college days as we scrubbed every speck off our dishes and dried them by hand.

When our new dishwasher arrived last week, I vowed never to take its familiar whooshing sound for granted again.

Glenn Murray, General Manager of Communications at Driver Easy, said that many customers report feeling the same way after experiencing the time-saving effects of his company’s software — which scans computers for outdated device drivers and automatically updates them.

Driver Easy has been saving users time and headaches for over a decade.

“With Driver Easy, you can do everything with just a couple of clicks,” Glenn told us. “When you see it in action, it’s a thing of beauty! Especially if you’ve ever tried doing it manually.”

Drivers — software components that act as interpreters between the Windows operating system and connected devices — need to be properly and consistently updated to prevent slowed performance or even crashes. Executing those updates by hand not only takes a long time, but it’s fairly risky: install the wrong driver, and your problems are bound to get worse.

Driver Easy was designed to help even inexperienced computer users resolve problems within a few minutes. More than 3 million customers across the globe use the renowned tool, which, thanks to a database of over 8 million drivers, can fix nearly any device driver.

With custom backups and restoration points planned for the near future, Driver Easy is poised to maintain its rank as a highly valued driver update tool for decades to come.

Serving More Than 3 Million Users Over More Than 10 Years

Since its inception in 2009, Driver Easy has become a renowned driver update tool.

“The Driver Easy story is a very simple one,” Glenn said. “Back in 2009, Windows was terrible at keeping device drivers up to date, so our founder, Kevin Zheng, put a team together to build something that would do it better. We didn’t really have any competitors, so we didn’t have a differentiation challenge. Having a good product was enough.”

Since then, the company has continued to create a reliable product that detects all missing, outdated, and mismatched drives, earning the trust of more than 3 million users across the globe. Today, the software is offered via free and paid plans, providing consumers with a range of choices. 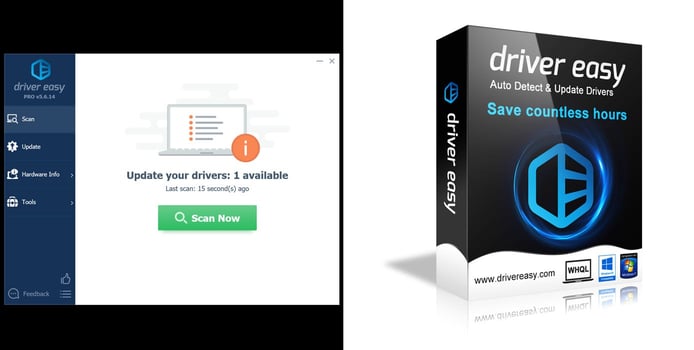 Users can detect updates and download drivers for free, with installation available on paid plans.

The free Driver Easy Lite, for instance, will detect problems and download remedial drivers, but they must be installed manually in Windows.

For less than $30, Driver Easy Pro will detect, download, and install all drivers on three PCs for an entire year. For less than $100 a year, customers can purchase Driver Easy Technician, which covers up to 50 PCs for three days per machine.

Both the Pro and Technician plans feature automatic restore points and system backups, the ability to roll back to previous versions of drivers, free tech support, commercial licensing, and automatic updates. All plans include a unique offline scan. This tool empowers users to scan drivers without internet access on a problem computer and download the right drivers on another PC.

Glenn told us that, despite the release of many new versions of Windows since 2009, Microsoft hasn’t substantially changed the way it handles drivers. The way drivers work in the Windows environment has also remained relatively unchanged.

“Our biggest challenge has been keeping our database of over 8 million drivers up to date, and algorithmically matching those drivers to the appropriate hardware devices,” he said. “This is done mostly with hardware IDs, but it’s rarely a simple one-to-one match. It requires a lot of expertise to get it right. Perhaps that’s why Microsoft never got good at it!”

Of course, Driver Easy has evolved along the way, adding new features designed to make users’ lives easier. From simple scanning and one-click fixes to backup and restore and tech support, the underlying tenet connecting these features is an effortless user experience.

“We believe in easy,” Glenn said. “This belief comes from the top down.”

Kevin, the company’s founder, likened the user experience to the joy of trouble-free cooking:

“When I was a boy, growing up in China, cooking rice was hard,” Kevin wrote on the company site. “There were so many ways you could ruin it: too much water, too much rice, wrong temperature, wrong cooking time, and a hundred other variables. Then the electric rice cooker came out and solved all of those problems. Now, cooking rice is as simple as pressing one big button. I believe fixing Windows driver problems should be just as easy.”

Driver Easy is one of those tools that accomplishes just one task but does that one task exceptionally well. Considering the fact that manually updating drivers is a painstaking process that can take hours — sometimes even days — the software can spare users significant headaches.

“You have to figure out what drivers are out-of-date on your computer and note the make and model of the corresponding devices, as well as your computer and version of Windows,” Glenn told us. “Then, you have to figure out which manufacturer is likely to have the most up-to-date version of all those drivers (there’s usually more than one manufacturer involved per device).”

The next step requires visiting the website of each of those manufacturers, locating and downloading the appropriate drivers, and installing them.

“Installing them, alone, can be very difficult,” Glenn said. “And, if you make a mistake somewhere along the way, you can make your computer problems even worse.”

To ensure a trouble-free process, almost all of Driver Easy’s development efforts are driven by customer feedback. The company gathers this information in a few ways — first, through its thorough and responsive support team, and second, by inviting all paying customers to leave a review on Trustpilot. (The company scores 4.4 out of 5 stars on the platform, with more than 4,700 reviews).

“Whenever a customer reports a problem in either forum, we investigate it,” Glenn said. “If it’s a software issue or something that can be fixed with software, we throw it into the mix for development prioritization,” Glenn said.

Glenn told us he’s immensely proud of Driver Easy, and his personal journey with the company illustrates why. Before becoming an employee, he had firsthand experience with Driver Easy as a customer.

“I first used the product years ago after spending two days trying to manually find a network driver for an old Windows 7 PC without an internet connection,” he said. “Driver Easy had me up and running in 10 minutes!”

After sending the company a thank-you email and receiving a follow up, the Driver Easy team discovered that Glenn worked as a copywriter. He signed on to do some freelance work for the company and eventually became a permanent employee. In his current position, Glenn said he’s fortunate to enjoy the freedom of leveraging his skills where he sees fit.

“And it’s not just me who gets treated like that; everyone does,” he said. “Kevin encourages everyone to learn, expand, and be proactive. If you want to focus on just one thing, you can, but if you want to do lots of things, you’re encouraged. This gives everyone a feeling of ownership.” 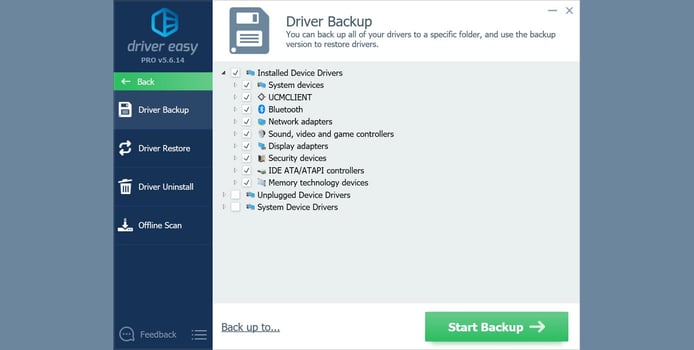 The Driver Easy team is working on updates to further automate its restore points and system backups.

As for what comes next, Driver Easy has exciting new features in development designed to reduce the impact of problematic drivers. Currently, Driver Easy installs drivers that come directly from device manufacturers — the vast majority of which are signed and certified by the manufacturer.

Though 99.98% of the drivers that Driver Easy installs feature either a WHQL signature or the chip manufacturer’s own digital signature, bugs from the manufacturer are inevitable. With its new updates, Driver Easy is offering two solutions to this problem.

“First, the software automatically creates a restore point before updating drivers, so if you run into a problem, you can roll back to that restore point — but this feature currently taps into Windows’ native restore point functionality, which is a bit unreliable,” Glenn said.

Second, Driver Easy currently allows users to back up, uninstall, and restore drivers. However, Glenn said he’d like to add more automation to improve this functionality.

“The improvements to both of these features are what I’m most excited about,” he said. “We’re working on a custom restore point feature and completely automated driver roll-back feature.”