Versio Provides Fast, Secure, and Affordable Hosting Solutions For More Than 600,000 Websites in the European Marketplace

By: Sean Garrity Updated: April 30, 2019
Follow "The Hosting Blog" daily as hosting experts, programmers, and tech managers go in depth on a variety of tech-related topics.

TL; DR: Although the European web hosting marketplace has become increasingly competitive, Versio has managed to grow its client base in the region by offering quality IT products at affordable prices. Clients from startups to major hospitals appreciate Versio’s dedication to keeping their sites running smoothly — and on budget. But just because the host cuts cost for clients doesn’t mean it cuts corners — especially on security. Versio offers some of Europe’s most advanced solutions to keep client data safe and websites up and running.

In Europe, businesses looking for a web hosting provider can find endless options in what has become an ultra-competitive space. But many entrepreneurs and small businesses need a reliable hosting foundation built for growth that can help them scale within a budget.

That’s why many of them turn to Versio, a European host entrusted with keeping more than 600,000 websites running smoothly.

“Our goal is to provide an inexpensive product that anyone can use while offering support. We’re always trying to make our customers happy,” said Piedade Rodrigues, Versio’s Lead Marketer. “While pricing is one of the ways we do that, we know that customers also demand safe online connections and fast VPS, which is why we’re proud to have created one of the best all-around products on the European market.”

All of Versio’s services are as affordable as they are well made. Its real-time domain registration interface is both powerful and user-friendly and helps facilitate transfers while managing everything customers need. It also includes several tools that allow users to manage multiple domains simultaneously, which is a necessity for businesses that need to keep track of various online projects. 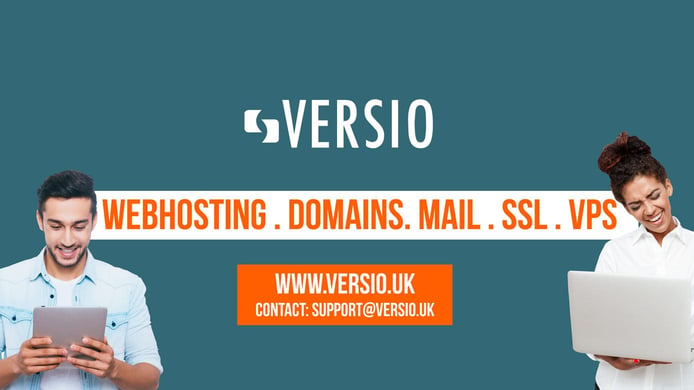 Versio provides European businesses with the domain registration and hosting tools they need at an affordable price.

Versio’s smart and reasonably priced offerings contribute to its place as one of the largest suppliers of web hosting packages in Europe. And customers of all types trust Versio, which is evident in the company’s overwhelmingly positive online reviews.

“We don’t only work with beginners. We also provide hosting for a number of large companies like hospitals,” Piedade said.

And Versio has managed to find that rousing success in one of the most competitive marketplaces in the world.

Today, web hosting is a $16 billion market in the U.S. alone. Name brands like GoDaddy have revenues in the billions of dollars, thousands of servers, and substantial support staff. And more of the world’s biggest corporations have muscled their way into the marketplace, as AT&T, Google, Microsoft, IBM, and Amazon all have web hosting divisions.

“There are more and more web hosting companies worldwide, which means that competition is getting more intense,” said Piedade.

But the four biggest players — Amazon, Microsoft, IBM, and Google — serve only 55% of the cloud computing market. That’s because many local customers have demands that those big companies can’t meet. They want personalized support and servers close to both their offices and to potential clients. That’s why hosting companies like Versio have thrived by focusing on these markets, even as they compete with Goliath-sized mega-corporations. 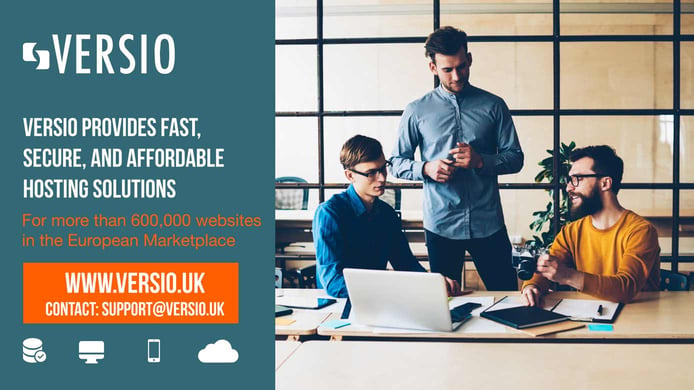 Versio’s European footprint includes locations in the U.K., the Netherlands, and Belgium.

Small- to mid-sized hosting companies have smaller footprints than their massive global competitors, and often don’t make it easy for other hosting companies to come in and steal customers. They have their own servers and support staff that are expensive to build, develop, and maintain.

In Europe, the second largest market after North America, the hosting industry is experiencing a rapid expansion. That means a lot of opportunity for growth, but also a lot of hosting providers chasing that growth.

That’s why Versio is always looking for ways to improve its platform’s value to keep pace with customer needs. According to Piedade, that means enhancing speed and adding features that differentiate Versio from the competition.

“We have to give our customers the best possible value — but our competitors are trying to do the same thing. We have a big customer base with about 130,000 clients. The challenge is improving our platform to make it even easier for us to work faster and help customers do what they want,” he said.

No one understands the importance of savings like a founder who is starting a business from scratch. With nothing but their savings and what they have left over after paying their bills, they often pinch pennies on everything from office supplies to hardware. For these bold entrepreneurs, Versio’s cost savings are an obvious win.

As businesses grow and become successful, they tend to ignore increasing costs, and some of them stop sweating the small stuff. That’s often a mistake — and even some of the most profitable companies in the world make it a point to fight those tendencies.

For example, in 2009, Amazon CEO Jeff Bezos told his company’s shareholders that he took all the light bulbs out of cafeteria vending machines. He said, “Every vending machine has light bulbs in it to make the advertisement more attractive. So they went around at all of our fulfillment centers and took all the light bulbs out.” While the measure only saved the billion-dollar company a few thousand dollars, it speaks to the value that smart entrepreneurs place on thriftiness, even after they’ve become successful.

Every company, from small startups to established ecommerce sites, can save money by using Versio hosting. Its affordable, secure, and high-quality solutions offer a manageable way to keep expenses down, so money is left to invest in innovation.

One solution, Versio Sitebuilder, allows customers to create, edit, and update their websites quickly and easily — even from a mobile device. The flexible tool optimizes sites for smartphones, tablets, and desktop computers, and allows even the smallest ecommerce entrepreneurs to maintain versatility and control at a cost that keeps them competitive.

“One of Versio’s most important market differentiators is our price, and we find efficient ways to keep our prices low,” Piedade said. “For example, we don’t have a phone number where customers can call us. We didn’t want to do that, not only because it helps keep prices low, but also because our online support is faster and our customers prefer that. However, we will introduce telephone support for customers with more complex products. We call them premium customers, and they need more specified support and are willing to pay more for specified support.”

While Versio was founded to provide European businesses with access to affordable, high-performance hosting solutions, the company believes that no one should settle for a web host if its value comes at the cost of security. That’s why Versio maintains such high safety standards.

Because safety is such a high priority for both the CEOs of large corporations and at-home bloggers, Versio creates daily backups of websites and keeps them for 60 days.

The company’s infrastructure also provides security, and all of its servers connect to a high-availability cloud, which guarantees excellent speed and uptime. If a server crashes, backup servers automatically kick in so there’s no downtime. Site data is stored on a fully redundant SAN equipped with RAID-30 drive configurations. Versio also offers SSL certificates to ensure that data can’t be read by any third parties. 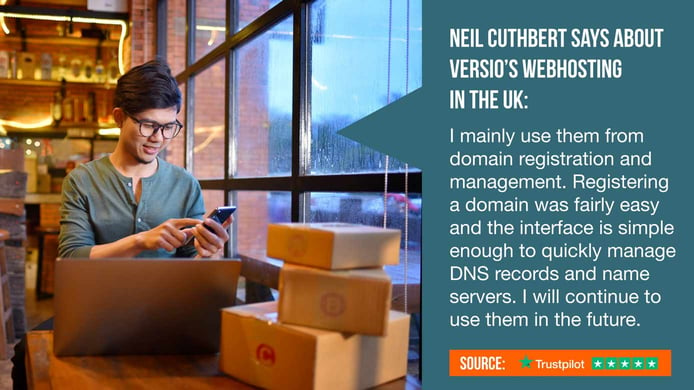 It can issue Domain Validation and Domain Validation Wildcard certificates within minutes. And customers can reach the help desk seven days a week if they encounter any problems. Versio guarantees that it will respond to every issue within 24 hours, but most times it responds faster.

For the Versio team, it all begins with making the customer happy.

“I start each day by looking at what our customers are saying and acting on that. When we find an issue that our clients are struggling with, it gets priority, and we create a fix,” Piedade said. “When a lot of our customers ask for a particular feature, we always take it seriously and consider building the feature for the community.”

That commitment to quality sets Versio apart from other budget options — and helps make it one of the best providers in all of Europe.