Making Twitter Work for You: Iconfactory’s Twitterrific Helps Mac Users Get the Most of the Social Media Platform

By: Christine Preusler Posted: April 21, 2020
Follow "The Hosting Blog" daily as hosting experts, programmers, and tech managers go in depth on a variety of tech-related topics.

TL; DR: Twitterrific, Iconfactory’s friendly yet powerful third-party client for Twitter, puts Mac users in full control of their social media experience. The tool showcases the content that tech-savvy users care about via an uncluttered chronological timeline, customizable fonts and type sizes, and automatic syncing between Mac and iOS devices. Moving forward, Iconfactory’s efficient team will remain devoted to ongoing innovation, whether that means updates to classics like Twitterrific or the release of new products, such as the color-coded multitab editor, Tot.

When you think of Twitter, specific imagery likely comes to mind: a carefree bird mascot, the chirp of a tweet, maybe a splash of cyan blue. Together, these elements make up one of the internet’s most recognizable brands.

But Founder and CEO Jack Dorsey can’t take all of the credit for Twitter’s memorable identity. When the social media channel first launched on March 21, 2006, no bird logo had hatched, and no tweets had been heard. The company adopted these brand signals later, thanks in part to Iconfactory’s third-party Twitter client, Twitterrific.

Craig Hockenberry, the creator of Twitterrific, came up with the idea for the world’s first Mac-based Twitter client while taking a shower in December 2006. As he began to build the user interface, he wanted to avoid long, boring menu items such as Post a Twitter Update. So he started calling them twits instead.

The latest version of Twitterrific was designed to be the Mac’s most friendly, powerful, and modern Twitter client.

Meanwhile, Twitter Developer Blaine Cook had begun beta testing Twitterrific and sent an email to Craig suggesting that he substitute the word “twit” for “tweet.” The Iconfactory team agreed, making the change immediately.

By January 2007, Iconfactory Designer David Lanham created a cheerful bird icon to represent the Twitterrific client. “At the time, Twitter’s mascot wasn’t a bird — the icon for the app was just the letter T,” said Ged Maheux, Co-Founder at Iconfactory. “After we made Twitterrific and gave it the bluebird icon, Twitter slowly became synonymous with the bird.”

It wasn’t until September 2010 that Twitter unveiled its two-dimensional bird icon, which was modified slightly in June 2012 and has remained unchanged since.

Today, Twitter has become a staple in our daily lives, and Twitterrific remains one of the most popular clients designed for the social media channel. The company’s lead programmer, Sean Herber, has shepherded Twitterrific toward continued success for years.

But Ged told us it wasn’t easy to remain beloved by so many for so long. That’s because, as time passed, Twitter’s stance toward third-party developers changed dramatically.

“Initially, they really embraced the notion of third-party apps, but over time, new investors and leaders came in,” he said. “They stopped supporting certain APIs and introduced limits on the number of users that a third-party app could have.”

In 2018, Twitter disabled push notifications for third-party clients. Group direct messages, Twitter Polls, and Twitter Moments are also not available to makers of such apps. These limitations forced many other third-party developers — particularly those who create apps for Android — out of the space. 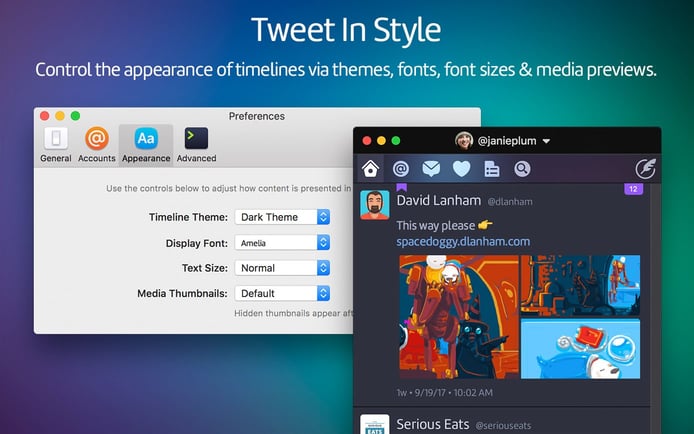 But with a nimble team and agile approach to keeping up with near-constant changes, Twitterrific survived.

“We had to adapt as Twitter shifted their focus away from social media and toward enterprise solutions,” Ged said. “Today, only Twitterrific, Tweetbot, and a couple of other applications still interact with Twitter.”

Despite forced limitations, people are still drawn to Iconfactory’s signature app because it allows them to do things that Twitter alone can’t.

Ultimately, through its customizable features, Twitterrific has the potential to make bored users fall in love with Twitter all over again.

It also makes for a more visually appealing user experience via various themes, fonts, and type sizes. For instance, the client offers light and dark themes, both of which feature multiple bird-named color combinations. (I’m partial to Akikiki in the light category and Parakeet in the dark category, which echo the colors of their real-life avian counterparts.)

Users can even change their doc icon from Twitterrific’s signature bluebird to a pink flamingo, soft gray dove, or bright red cardinal, among other choices.

Twitterrific also empowers users to take control of their tweets with an uncluttered timeline and multiple columns that can be displayed on the Mac desktop.

“I would say Twitterrific tends to attract independent, tech-savvy users who have an eye for design and are not afraid to try new technology,” Ged told us. “They want to be able to customize how the app works and apply custom themes and fonts. Of course, there are marketing teams that use it all the time and even some celebrities. The audience is pretty broad.” 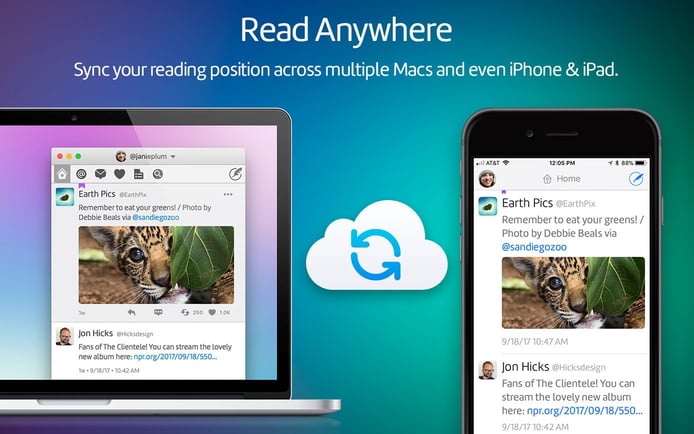 A seamless experience: Twitterrific automatically syncs the user’s reading position between the iPhone, iPad, and Mac.

One of Ged’s favorite aspects of Twitterrific is the client’s ability to quickly delete and edit a tweet. Twitter doesn’t natively allow for edits, and if Jack Dorsey has his way, it probably never will.

“We started as an SMS, text message service. And as you all know, when you send a text, you can’t really take it back,” he said in a recent video Q&A with Wired. “We wanted to preserve that vibe, that feeling.”

Twitterrific offers a workaround, allowing users to automatically delete an error-riddled tweet, copy its contents into the posting interface, make corrections, and re-post within a few seconds.

“People make mistakes and typos all the time, and they want to correct them,” Ged said. “We make it easy to do so without the process of looking up the tweet, copying and pasting the text, and then making corrections.”

Another popular feature Twitterrific offers that Twitter does not is muffling, which empowers users to hide links, hashtags, keywords, or even other users from their timelines.

Instead of muting or removing tweets from the feed entirely, the feature minimizes them to a single line with a short description. Users then have the option of interacting with these filtered tweets — or scrolling right on by.

“We have found that a lot of users leverage muffling to avoid spoilers,” Ged said. “When new movies or TV shows come out, we’ll post a muffle so that users can see that people are tweeting about the topic over and over again, but they won’t get any details they don’t want.”

The feature has come in handy at a time when the 24/7 cycle of COVID-19 media coverage is amplifying distress for many social media users. To alleviate this burden, Twitterrific crafted a special filter rule to catch all mentions of the virus and funnel them into a muffle — keeping such news to a minimum in the user’s field of view.

“One of the complaints that we hear from Twitter users is that they see tweets that have been posted days or even weeks ago at the top of the timeline,” Ged told us. “These posts aren’t relevant, especially in this day and age, when things change so quickly. Yet Twitter insists on putting these tweets front and center because either they’ve got a lot of likes or they’re being retweeted a lot.”

Twitterrific also ensures there are no promoted tweets in the timeline, with the exception of its free app, which features one ad at the top of the stream.

After serving users for more than a decade, Iconfactory still has a list of surprises up its sleeve, including a top-secret project.

In addition, the company just released Linea 3, a follow-up to its popular sketching and journaling app. It also introduced its brand-new app, Tot, a free, color-coded multi-tab text editor that allows users to collect and edit text.

“We’re such a small team,” Ged told us. “I wish there were more of us so we could work on multiple apps at multiple times, but there aren’t, so we can’t. We have to pick and choose what battles we’re going to fight. But Twitterrific is always near and dear to our heart, so we will keep adding new features to it.”