TL; DR: TVCNet has provided entrepreneurs with cutting-edge hosting solutions since the 1990s when it was the first shared host to offer PCI security compliance to full HTTP/2 support. Today, its proprietary WebTight™ Security system provides strong firewalls and daily malware scans that keep client websites safe. In addition, it has a team of experts who ensure that WordPress sites stay updated and protected. TVCNet’s security and level of personal service satisfies clients and helps the host maintain growth.

When the team at Analytic Domains was building its websites, it ran into one problem after another. First, its sites were corrupted after a network-wide update initiated by its hosting provider. For the next 18 days, the sites stayed offline. Just a month later, on the very same day the company hired web developers to finish building the sites, they went down for another two days.

After Analytic Domains finally managed to get back online, its sites were attacked. Its hosting provider ran a scan, quarantined a few files, and called it quits. They told Analytic Domains that its admin name had been changed, its passwords had been rewritten, and all of its websites were inaccessible.

TVCNet has been helping entrepreneurs since 1997.

When all seemed lost, Analytic Domains turned to TVCNet, a host known for its customer service and security. TVCNet got to work and quickly put the company’s sites back online. Justifiably upset with its previous provider, Analytic Domains decided to move everything over to TVCNet. Before it could, its provider’s server went down for another 30 hours. Luckily, TVCNet had already made a clean backup and soon all of its websites were up and running with TVCNet.

After dealing with disaster after disaster, Analytic Domains had found a hosting solution that genuinely worked, with customer service that guided them through even the worst scenarios and kept its websites safe.

“I have never been so impressed. The service was truly extraordinary,” said Todd Bruck, a member of the Analytic Domains team in an online testimonial.

TVCNet has been helping businesses get online and stay online for more than 20 years. With world-class customer service, a team of helpful WordPress experts, and its proprietary WebTight™ Security system, TVCNet has created a solution that doesn’t just save companies in the midst of disasters — it helps thriving companies become even more successful.

TVCNet is one of the oldest shared web hosting company in North America. It was called Internetter.com in the 1990s and, even back then, it trained its staff on the latest cPanel technologies.

In 2009, it began to offer free daily malware scanning, another industry first. TVCNet inspected every file for malicious content and notified site owners the same day it spotted anything suspicious.

The host delivers a number of hosting solutions, from security services to shared, virtual, and dedicated servers.

As the company rolled into the next decade, the innovations continued. In 2012, it began to offer shared SSD hosting services priced at less than $5 per month. But it ensured that its competitive pricing wouldn’t mean slower sites, and TVCNet continued to provide some of the fastest loading times in the business. The company hit yet another milestone in 2015 when it introduced full HTTP/2 support.

And the TVCNet team continues to push the envelope. The company has increased its value with SSD high-speed hosting packages starting at just $3 per month. And site owners, like those at Analytic Domains who need a new hosting partner quickly, can migrate their websites to TVCNet for free.

WebTight™ Security Can Stop Hackers in Their Tracks

“Since I founded the company in 1997, I’ve understood that hackers rarely take a day off. Open-source script content management systems like WordPress, Joomla, Magento, and Zencart have only become more popular,” Jim said. “That makes it increasingly difficult to fully secure websites against every possible exploit. That’s why we created WebTight™ Security.” 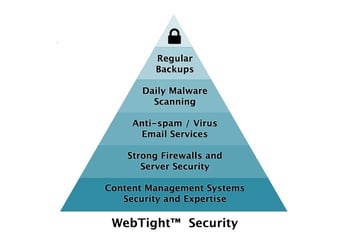 TVCNet believes that all site owners should use their host as their first line of defense against malicious attacks. “So many hosting providers seem to believe security is solely the responsibility of their clients. We disagree,” Jim said.

Whereas other hosting providers respond to attacks by turning off or suspending client websites, TVCNet treats security as a team effort. It accomplishes that by using strong server firewalls and maintaining a close connection with the people who use and build open-source content management systems.

TVCNet also provides automated malware scans, and its staff reviews email logs daily. When a client’s site or email has been compromised, it notifies the client immediately, recommends a course of action, and helps clean up the mess.

Even website owners who don’t use TVCNet’s hosting service can take advantage of its hacked website cleaning service HackRepair.com. For more than a decade, its California-based team has been clearing malicious software and HTML from websites.

And, if Google has blocked a corrupted website, TVCNet doesn’t stop working until the site is back online.

Today, WordPress powers 30% of websites because it’s a powerful solution that offers intuitive tools. But busy entrepreneurs and site owners have a lot on their plates. Sometimes, they don’t have enough time to ensure all of their WordPress features and plugins are up to date.

But forgetting updates creates myriad problems, from slow loading times to increased security vulnerabilities. Visitors may get frustrated and leave for the competition, and hackers often try to exploit out-of-date systems.

That’s why TVCNet offers WordPress management. Its team monitors WordPress versions and plugins on websites, and updates them at least once a week. And it installs and maintains the WordPress Security plugin the client chooses so TVCNet can monitor sites for file changes and notify clients if they spot suspicious activity.

In addition to these services, it backs up WordPress databases and core files. After each update, it manually reviews sites to ensure everything is working as it should.

Even WordPress site owners who don’t use TVCNet as their hosting provider can use its WordPress SSL Setup Service. It’s a must-have in today’s landscape where hacks at companies like Target, Equifax, and Marriott Hotels have made even the least savvy internet users aware of the dangers of unsecured sites.

When visitors are confronted with a warning that a website isn’t secure, the first thing they’ll do is leave. TVCNet’s SSL Setup Service keeps sites secure so customers never see those jarring alerts.

Built on the Belief that Personal Customer Service Matters

What makes TVCNet unique isn’t just its commitment to cutting-edge technology and robust security. It’s also the focus on personable and responsive customer service. When a company like Analytic Domains calls the customer support team, it can speak to a real person. And that representative answers questions instead of just trying to sell services.

In the case of Analytic Domains, that service led to the revival of all of its sites and the company moving all of its business to TVCNet. Website owners can also call the company’s office in San Diego, send an email to the customer service team, or live chat with a representative on TVCNet.com.

TVCNet’s long-term clients have become accustomed to trusting the team. One client, Laughlin Homes & Restoration, praised its level of responsiveness.

“We’ve been with TVCNet for over five years. Every time we’ve contacted their staff to get answers or solve a problem, we’ve received a prompt response,” the company said in an online testimonial.

The staff at Laughlin understands that many other companies don’t treat customers that way. Recently, a Laughlin employee found that his phone couldn’t receive company emails. He reached out to a customer service representative at the phone company — who could not help fix the problem.

When he turned to Jim’s team, he had a very different experience. TVCNet responded promptly and quickly restored the connection between his phone and the company email account.

That kind of dedication and patience is why so many entrepreneurs and established businesses alike have chosen TVCNet for their hosting needs. And the company plans to continue innovating to offer those customers even more in the future.