By: Christine Preusler Posted: March 6, 2018
Follow "The Hosting Blog" daily as hosting experts, programmers, and tech managers go in depth on a variety of tech-related topics.

TL; DR: When it comes to WordPress hosting, UK-based Tap knows that, in many ways, less is more. The company’s WordPress package is feature-rich, including 24/7 threat monitoring, free SSL certification, and advanced customer support — but from a user perspective, things couldn’t be simpler. With the tap of a finger, the company makes it possible to launch in record speed a site outfitted with all the bells and whistles. We recently sat down with Tap Co-Founder Matt Luke to learn more about what makes the platform shine and what users can expect in the future.

Like most startups, Tap hit the scene to fill a need. In 2014, Pete Heslop, Matt Luke, and Joe Perkins were running a web design agency specializing in WordPress development. Each had his role: Pete was the resident techie, Matt served as creative director, and Joe specialized in all things marketing.

They each had been hosting client sites on their own servers, with Matt manning front-end development. All was well, until Matt started wandering a little too far into Pete’s territory.

“Whenever a new client site was due to go live, I would be trying to figure out my way around the servers,” Matt, now Co-Founder of Tap, said. “Tap was born out of Pete’s frustration with me messing around with his servers.”

In lieu of swatting at Matt’s hand, Pete wrote a script to automate tasks and lock Matt out of areas where he could inflict unintentional damage.

“We instantly thought this could be a product,” Matt said. “There’s plenty of people out there starting their own WordPress sites, but the whole creation of databases, uploading all the core files, dealing with the SSL stuff — people creating WordPress sites aren’t necessarily too familiar with that sort of thing. We knew we could automate all that.”

The company’s mission to help non-developers launch sites quickly and easily remains the same today. The managed WordPress platform is so intuitive that users can get sites up and running in as little as 60 seconds. And it’s budget-friendly. Just $5 per month gets you a Tap Pro Site, which includes 24/7 threat scanning, free SSL certification, and advanced customer support.

“It’s quite a good all-around service; it checks a lot of boxes,” Matt said.

Tap users can get acquainted with the platform at no cost for 30 days on a Tap subdomain before upgrading to a Pro Site on a custom domain.

Unlike trial sites, Pro sites are suitable for 25,000 visits a month and include 24/7 server monitoring, 15 gigabytes of storage, private SSL, and enhanced customer support — all for the $5 price point. It’s no wonder Tap describes its hosting experience as “loveable.”

“You don’t have to charge through the roof for managed WordPress hosting,” Matt said. “We just took the view that $5 a month is profitable for us, and it’s also affordable for the client.” 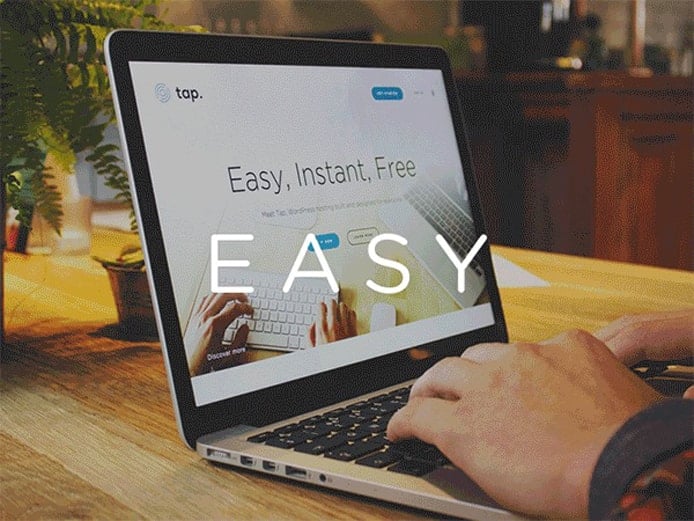 Tap users get professional-grade WordPress hosting with all the bells and whistles for just $5 per month.

As a small and nimble company, Tap enjoys distinct advantages over its larger competitors. Matt told us it may seem remarkable the company can offer such a robust service at such a low premium. But, he noted, the formula is really quite simple.

“We don’t have the huge market share that would demand a big team with high overheads, so we can remain fairly lean,” Matt said.

The beauty of Tap lies in its ability to simplify the complex. Site owners automatically receive the latest version of WordPress, and Tap’s system will perform all the configurations.

“Everything is automated from the time you click ‘create site’ on the GUI,” Matt said.

Free, automatic SSL certification is available through an integration with Let’s Encrypt, and all sites are powered by Google Cloud with NGINX caching. 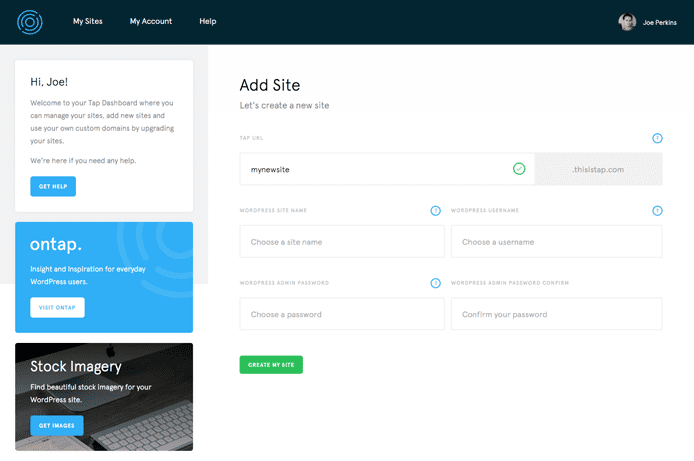 Tap customers can get WordPress sites up and running in a matter of seconds with the company’s intuitive platform.

“As an entry-level developer or WordPress hobbyist you wouldn’t be able to navigate your way around the cloud platform Google offers because it’s quite complicated,” Matt said.

With Tap, users can benefit from Google’s servers, which are routinely optimized, in the easiest way possible. The cloud platform also allows Tap to scale its business, creating a cost savings that is passed on to the customer.

“Google Cloud allows us to only buy the cloud space that we need for the demand that we’ve got,” Matt said.

Tap’s customer support system is facilitated by Intercom, a messaging platform that helps businesses connect with consumers to identify and address pain points. Intercom’s artificial intelligence functionality automatically responds to user support queries by matching keywords to the Tap knowledgebase that Joe has been building.

“The Intercom AI stuff is amazing,” Matt said. “It doesn’t intervene in the reply you get from an actual human — it complements the entire process rather than distracting you from actually getting through to somebody.”

By using Intercom’s support tools, Tap team members can communicate directly with customers on a number of platforms.

Tap keeps track of routine customer inquiries as they arrive to ensure corresponding answers can be found in the knowledgebase.

“The fact that it’s always learning and getting smarter just encourages you to really build up your support documentation through Intercom,” Matt said.

There are a number of reasons Tap loves Intercom’s support system. The platform’s live chat allows Tap to quickly respond and direct the user to an appropriate team member. The system allows Tap support personnel to chat with customers in real time. And Matt noted Intercom integrates seamlessly into all of its customer communication channels, which enables the team to engage with users on their desired platforms.

From the start, there were omens that the two platforms would pair well.

“The brand colors were the same blue as ours, so we thought it was a great fit,” Matt joked.

Intercom has also helped Tap begin to mature its platform. Tap’s development team anticipates launching Version 4 in 2018, and Matt told us it will be a product of the feedback the company has gotten through Intercom.

“It’s been invaluable for informing a development roadmap,” Matt said.

“At the start, we had all of these crazy ideas for cool features and that sort of thing, but they have taken a back seat, because we’ve realized that we’re actually talking to the people who want these updates, and those features are not what they’re talking about,” Matt said. “They’re talking about other things.”

Moving forward, Tap will continue to operate with simplicity in mind, a formula Matt said has proven to be a real crowd pleaser.

“We’re really ambitious, but we’re not in the game of trying to scale it really quickly,” Matt said. “It really is about building a valuable quality community of people who like our product. We want to grow organically and do the best we can.”

If you’re a new customer interested in getting up and running with Tap Pro, simply mention HostingAdvice at signup, and Tap will refund your first month’s service if you upgrade before May 31, 2018.