TL; DR: By helping enterprise companies quickly design, develop, and test applications across devices and browsers, Sencha serves more than half of the Fortune 100 with robust and intuitive JavaScript frameworks. Known for its flagship Ext JS platform, Sencha recently launched comparable libraries and components for the red-hot ReactJS. Sencha developers stay ahead of the rapidly evolving open-source communities to save customers the stress and time of updating and managing dependencies.

For more than a decade, Sencha’s Ext JS framework has helped developers build powerful web applications. The platform has grown to include streamlined tools for designing themes, testing functionality and compatibility, as well as a cross-platform framework for mobile web applications.

Sencha ExtReact, released in May 2017, capitalizes on the rapidly growing popularity of the React library. Developed by Facebook, React enables developers to rapidly create user interfaces for highly scalable applications.

Even though he works for Sencha, Engineering Director Mark Brocato will occasionally create JavaScript apps using libraries such as ReactJS. As he puts it, it’s important to keep up with different technologies, but the practice is not for the faint of heart.

“The typical React application pulls in 10, 20, 30 different libraries of components, built by all sorts of different authors with different styles, release cycles, and levels of skill,” Mark said. It becomes a huge burden to pull these into a coherent app which you can maintain over time.

“Literally, every time a new version of something comes out, I have a heart attack,” he said. “I know the [library] update will work with React, but it’s a huge, time-consuming exercise to make sure it’s on the same page as all my other components, so my app doesn’t break.”

For companies using Sencha libraries and frameworks, however, one update will do the trick. “Rather than having to get a lot of that from 20 different parties, you can get all that stuff from one party — Sencha — and it is commercially supported.”

With a focus on helping developers build applications in the most efficient ways possible, the company has spent 10 years building a collection of full-featured components, such as grids, forms, and other elements, so developers won’t have to attempt to build their own or pull in yet another library.

Instead of building components from scratch, Sencha provides more than 115 UI elements, including grids, layouts, charts, forms, menus, buttons, and other interactive ingredients.

Once Facebook released React to the open-source world, developers would build apps by choosing from several different options for each part of their application. Libraries come from individual developers or enterprise-level organizations, from experts to beginners.

Each library is updated differently, with many tech-savvy groups switching to rapid-release cycles. Developers using components from several different libraries will spend a significant amount of time updating and repairing their application as those libraries evolve, according to Mark.

With ExtReact, however, all the components update at the same time and are already tested for compatibility with various browsers and platforms as well as the current React release.

“Removing the stress of keeping all these components integrated as various release cycles go by is something we really help with,” Mark said. “ExtReact makes new releases more predictable.”

ExtReact provides a one-stop shop for professionally built components that work together seamlessly and address nuanced and advanced needs such as robust data buffering, docking headers, and local or remote sorting.

“For developers to build that is a huge undertaking,” Mark said. “You really have to have the knowledge to build that kind of thing in JavaScript. Depending on how many components you want, it can be weeks’, months’, or years’ worth of work. Plus, the quality of the end components is going to be a lot higher when you use our stuff.”

JavaScript libraries often focus on certain functions of a user’s experience, whether it’s managing a form, interacting with an embedded map, or applying a particular effect to an image. With 115-plus components, ExtReact developers rarely need to utilize additional UI components.

“There’s no other library out there for React that’s even half as extensive as what we’ve put out in terms of coverage,” he said. “You’re getting all the components, both simple and complex, that we can offer.”

How the Sencha Platform Accelerates All Phases of Development

Beyond ExtReact, several elements of the Sencha platform contribute to streamlining application lifecycle development and management. The integrated and modular programs can be deployed separately or together, depending on developers’ needs.

When it comes to development, these tools, along with IDE plugins for the most popular IDEs and editors, ensure that developers have access to the right tools in their preferred workflow.

Sencha’s advanced components make it easy for developers to add powerful capabilities to their applications, including data analytics and visualizations, responsive configurations, and accessibility support. The Sencha components automatically handle time-consuming tasks such as ensuring consistent rendering and behavior in different browsers and devices.

While the JavaScript components are pre-tested, customers can write unit and end-to-end functional tests of their larger app using Sencha Test, is designed to provide advanced testing capabilities for Sencha-based apps. To make the most of limited testing resources, Sencha Test can run the tests on any or all browsers on a local machine or connected mobile devices, or distribute them onto a browser farm.

Immersing in Open-Source Communities to Stay Ahead of New Releases

According to Mark, Sencha developers and engineers pride themselves on staying current with user needs, open-source JavaScript and React communities, as well as what new innovations other libraries are introducing.

“Every one of these developers is super plugged into what’s going on in all aspects of the JavaScript community,” he said.

Mark watches the React GitHub repository each day to monitor the progress and commits. “There’s a major refactor coming, and I’m sure it’s going to send ripples throughout the development communities,” he said, describing the pending React Fiber update. 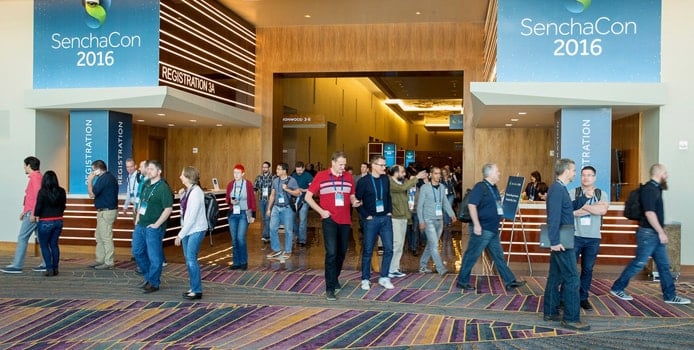 Sencha developers and experts regularly meet at SenchaCon to discuss product roadmaps and new features.Mark and some of the Sencha developers have been developing against unreleased versions of the new React, incorporating GitHub commits in preparation for the big unveiling.

“We don’t sit in on their meetings or anything, so we only consume what they make public,” he said, adding the team follows React leaders on whatever social network or message boards they can find.

“Imagine every company out there using React needing to do a very similar effort,” Mark said. “Staying current to these open-source frameworks is very challenging and very important. We hope that by folks using ExtReact and our tools, we can ease some of that burden.”

Sencha, which is based near San Francisco in Redwood City, boasts more than 400 years of combined developer experience among the company’s employees.

“We have a lot of seasoned experts who have come from all different areas of the tech industry,” said Technical Marketing Manager Jon Jarboe, who comes from the embedded systems realm. “We have a very broad technological base.”

In addition, Sencha operates in a wide geographical footprint. The company has a local presence in Canada, the UK, Italy, the Netherlands, Hong Kong, Korea, Australia, and Japan, and many employees work remotely.

“If you’re going to find JavaScript developers capable of writing frameworks like Sencha Ext JS, you have to find them wherever they are,” Mark said. “You can’t just hire them all in one town. The level of talent and expertise required is quite high. We’re all over the place.”