By: Laura Bernheim Posted: September 28, 2016
Follow "The Hosting Blog" daily as hosting experts, programmers, and tech managers go in depth on a variety of tech-related topics.

TL; DR: With more than $50 billion in transactions annually, Magento is the leading platform for getting things sold online. In addition to offering a free, open-source eCommerce tool that drives profit and growth for hundreds of thousands of merchants, Magento boasts a strong suite of cloud-based commercial solutions that merge both digital and physical shopping experiences. Virally successful from the start, Magento’s path became muddled under corporate ownership. Now with funding and their independence, Magento is back to thriving with a global community network of more than 130,000 contributors and 250,000 stores.

Publicly released in 2008, Magento was a hit from the start. Next to the cumbersome, complex, and expensive products available at the time, Magento’s lightweight, open-source platform was a welcome option for businesses looking to enter the bustling eCommerce space.

Magento’s eCommerce tools enable merchants of all sizes to control the look, content, SEO, digital marketing, and functionality of their online stores. Magento’s rise was so steep that the company attracted a major investment from eBay, who later acquired the entire company.

Even though they shared an umbrella with PayPal, Peter said Magento “got a little lost” under eBay ownership. Pulled in different directions, Magento and eBay seemed at odds over balancing open-source ideals with maximizing profits.

As PayPal split off from eBay in 2015, Magento also gained their independence with the backing of Primera, a $25-billion private equity firm.

“It’s been really a fantastic experience, because it has allowed us to go back to our roots of being a disruptive eCommerce platform,” Peter said of Magento striking out on their own. “We’ve achieved more in the last 10 months than perhaps we achieved in the past four or five years inside of eBay.”

The Magento team has found new energy now that they’ve gained independence and are forging their own path.

Now with deep pockets, a thriving and global development community, along with hundreds of thousands of customers, Magento’s future is blindingly bright.

“We’re aggressively going back to market and ramping up a lot of those areas of the business,” Peter said. “It’s a very exciting time for Magento.”

Like other widely known open-source content management systems, such as WordPress or Joomla, Magento provides interchangeable themes that affect a store’s appearance or functionality. Merchants can also choose from an array of extensions or themes in the marketplace to further tailor the platform to their business’s specific needs.

The free Community Edition, which includes tools to create, promote, and manage a successful website, powers more than 250,000 stores worldwide by supporting nearly all languages, currencies, and local tax rates.

Even better, Peter said that merchants don’t need to be technically savvy to deploy Magento. Most use one of the company’s partnered system integrators or digital agencies.

“We try to make sure the merchants just need to focus on what they’re doing, which is merchandising,” Peter said.

Peter and Magento have noticed a growing demand from merchants who want to host in the Cloud without having to worry about the technical side of uptime, scaling, or patching.

“Our mid-market and enterprise customers are looking for a deeper relationship with Magento,” Peter said. “In addition to us providing the software, they want our support and expertise.”

Launched in April 2016, Enterprise Cloud Edition is a rapidly growing platform that Peter expects to be Magento’s dominant go-to-market platform within the next 12 to 18 months.

“When merchants see those peak moments during the holidays, they won’t have to worry about needing extra servers,” he said. “The Cloud is a truly scalable environment where we manage to take all the stress and pain of hosting away from merchants.”

In his previous job as an analyst at Forrester Research, Peter worked closely with Magento’s teams as he examined the technology and markets in the eCommerce platform realm. He noted that, historically, reporting and analytics have been Magento’s main areas of weakness.

With the August 2016 acquisition of Philadelphia-based RJMetrics, however, Magento will now offer tools for merchants to better optimize their business based on data and insights into their customers. Tuned for eCommerce business intelligence, the cloud-based analytics platform is marketed as Magento Analytics and will offer information such as:

“It goes far beyond your traditional web analytics, because it connects your Magento database, Google Analytics, CRM, and financials to get a very holistic, end-to-end view of your campaigns and customer life cycle,” Peter said. “That was a very key addition for us.”

Making the community platform’s code freely available can be both beneficial and detrimental, according to Peter. Increased access theoretically makes it easier for opportunistic companies to exploit potential weaknesses. 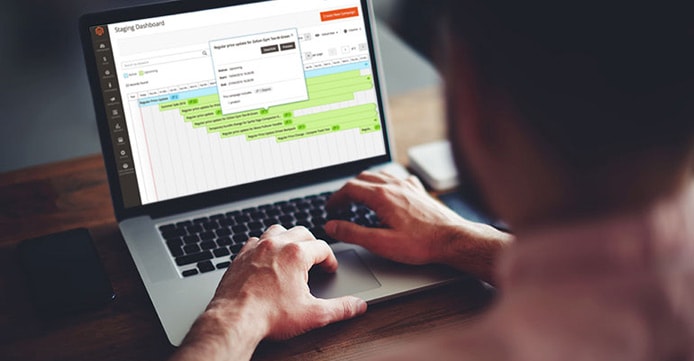 Magento dedicates a team to rooting out security concerns, developing patches, and distributing them to users.

“The other side says we’re significantly more secure than any of the other platforms, because there’s so much focus from the community on finding holes and bugs,” he said. “There’s an entire ecosystem that’s trying to make Magento as secure as possible.”

Magento employs a dedicated security team that monitors threats and can quickly distribute patches through a network of partners. Historically, Peter attributed most of Magento’s security concerns to merchants who don’t apply patches in a timely manner. As adoption of the Enterprise Cloud Edition grows, Magento can take a more hands-on role in merchants’ security.

“We effectively have control of their infrastructure,” Peter said. “We can patch them automatically, protect them with a web application firewall, and so forth.”

More than 130,000 developers around the world make a living on Magento development, whether for digital agencies, merchants, or as self-employed contractors.

“That drives this incredible innovation where a lot of these developers build extensions that enrich the capabilities of Magento,” Peter said.

Merchants typically use between 20 and 30 extensions, he said, adding that most are available for free or a very affordable price.

“This developer community and their extensions are a real differentiator for us,” Peter said. “Normally, with enterprise software, if it doesn’t have the feature you need, you’re beholden to the vendor adding it to their roadmap and delivering it. You have no control over your destiny.”

According to Peter, merchants can find an extension with the extra feature eight times out of 10 — and if not, they can build it.

“The community is this living, breathing ecosystem, and it sort of runs itself,” he said, adding that Magento encourages developers by fostering forums, support, and social media communication. “We are the custodians of the community, but we don’t own it.”

Now able to return the focus to the community of merchants and developers, Magento is finding success by going back to what originally made them successful: open-source products driven by user needs and innovations.

Magento’s annual Imagine Conference is one of hundreds of events for networking and learning about the platform.

“We want to recognize those real leaders in the community who are really pounding the ground for Magento,” Peter said. “It’s not something we actually can take credit for creating, though. It created itself with the viral nature of the open-source platform.”

With more than 3,500 attendees at their Imagine Conference in 2016, Magento’s fans are seeing where the company’s newfound independence takes them.

“You’ll see more interesting things coming from Magento as we act as a very different company,” Peter said. “We’re an independent, well-funded company that can be very nimble and aggressive in the marketplace.”