By: Laura Bernheim Posted: November 26, 2018
Follow "The Hosting Blog" daily as hosting experts, programmers, and tech managers go in depth on a variety of tech-related topics.

TL; DR: As a company proudly built by geeks, developers, and entrepreneurs, UpCloud applies a passionate and personal approach to cloud hosting. The company, based in Helsinki, Finland, has grown an international footprint behind innovative proprietary technologies, affordable hourly billing, and a 100% uptime guarantee. Boasting eight datacenters in six countries, UpCloud’s Infrastructure-as-a-Service resonates with small-to-medium enterprises enterprises looking for a cost-friendly, reliable alternative to developer-oriented cloud providers such as Digital Ocean and Vultr as well as the industry’s most massive players. CEO Antti Vilpponen gave us an inside look at UpCloud’s enthusiastic service and support.

No one can say that UpCloud Founder Joel Pihlajamaa, who is going head to head with the likes of Amazon Web Services, Microsoft Azure, and Google Cloud Platform, doesn’t have confidence. After starting his first hosting company as a 16-year-old in 2001, he set his sights on tackling the burgeoning cloud computing market more than a decade later.

“UpCloud was born out of frustration to the existing IaaS-players, especially regarding reliability and varying performance. We knew immediately that we could do so much better — and the rest is history”, UpCloud CEO Antti Vilpponen said.

Unlike most Founders, however, Joel currently serves as Chief Technical Officer of UpCloud instead of managing day-to-day operations. With the company’s focus placed squarely on forward-thinking technology solutions and follow-the-sun support, UpCloud has rapidly expanded to eight global datacenters while developing custom software that produces speeds twice as fast as standard SSD VPS hosting.

“We’re very much geeks and entrepreneurs and developers ourselves, so we eat our own dog food,” Antti said. “Much of the service was built for ourselves and what we wanted to see in the industry. While it’s a very competitive market dominated by the largest technology companies in the world, we’ve been able to carve out our own niche by being able to offer our customers really high performance and high reliability.”

UpCloud: Carving a Niche in a Competitive Cloud Landscape

Since launching services in Helsinki, Finland, in May 2012, UpCloud has brought its unique flavor of cloud hosting to datacenters in Amsterdam, Frankfurt, London, Chicago, San Jose, and Singapore, with additional support offices located in Singapore, London, and Seattle.

“There’s always something going on because it’s a very fast-moving business,” Antti said. 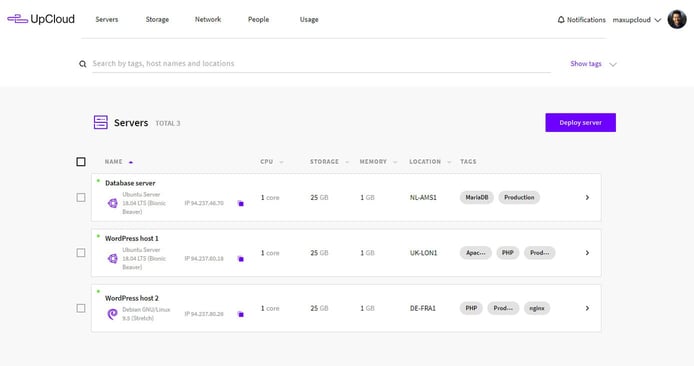 While the company’s team of self-described geeks and nerds naturally stay plugged into industry developments and new technologies, UpCloud takes a more measured approach to integrating new technologies into its stack.

“We like to stay up to date with the latest trends and whatnot, but it’s one thing to play with the latest fads and to put your full business on those,” Antti said. “We’re a little bit careful of hopping on the latest bandwagon, but we definitely want to be among the early adopters.”

Like the well-known competitors in the cloud hosting industry, including Amazon Web Services, Microsoft Azure, and Google Cloud Platform, UpCloud concentrates on providing fast, scalable computing power to business owners and application developers. The Infrastructure-as-a-Service platform is billed on hourly usage rates, though Antti said UpCloud is watching ongoing shifts in the industry with interest.

“We’re seeing perhaps the changing role of cloud computing and IaaS, and its role in the whole technology stack,” he said. “We definitely see the coming of different Platform-as-a-Service features and products, and not just in terms of managed databases or things of that nature, but mostly related to containers, combining cloud workflows, and so forth.”

One of UpCloud’s biggest early challenges, according to Antti, was figuring out an attractive position in the industry as AWS, Azure, and Google dramatically shifted strategies related to pricing and customer support. That said, reducing costs of running computing workloads has always been one of the three major focuses of UpCloud, joining tech experience and blazing-fast performance.

“They made a lot of the competition irrelevant because you need to have some sort of experience or capability to operate cloud environments at a certain price level,” he said. “That increased the barrier of entry into the space for quite a few companies.”

Despite the cloud industry’s perpetual and shifting state of innovation and reinvention, Antti said at least one trend has remained constant throughout Joel’s lengthy hosting experience: customers’ ever-present need for speed.

“Whenever you talk about virtual capacity, performance seems to be the biggest bottleneck compared to dedicated servers, bare-metal hosts, and services of that nature,” he said.

UpCloud rises to the challenge with custom orchestration software and MaxIOPS, a proprietary storage backend that outperforms already optimized SSD-based infrastructures — as well as AWS, Azure, Google, and Digital Ocean. According to Antti, customers can see performance of up to 100,000 IOPS per disk attached to the virtual server.

“The benefit is huge there, and that is definitely something we’ve been focusing on,” he said. “We’ve always taken the path of building these technologies and solutions ourselves. It’s not always the fastest route for us to take, but it’s the most satisfying, not just in terms of UpCloud, but in terms of the customers as well. They get the best solution we’re able to build, and we’re able to build it in a such a manner that it’s sold at a price point that’s attractive.”

For similar performance on optimized high-end compute AWS EC2 configuration, customers would pay twice as much as they would with UpCloud. Instead of mirroring industry leaders’ prices, the company fashioned its structures in correlation to more direct competitors, including Digital Ocean, Linode, and Vultr.

With three customer support offices spread across the globe, UpCloud takes a follow-the-sun approach to assisting its customer base of typically small to medium-sized businesses. While personalized support alone enables UpCloud to stand out among to the other main cloud hosting providers, the company goes a step further to emphasize its local presence.

“We really want to take a strong, hands-on approach and get our hands dirty in helping the customer in a local manner,” Antti said. “We’ve been able to see that when you’re a local company offering global capacity, that really rings nicely with the customers.”

Despite the investments in localized support via phone calls and emails, Antti also mentioned that sometimes the best service UpCloud can provide is simply getting out of its customers’ way and giving them the capabilities to fine-tune their infrastructure to their specific business requirements.

“The underlying philosophy is that we really need to give our customers the best tools available,” he said. “Whereas large enterprises may send a ticket to some portal, and people take care of it in two to five days, we want to build really good tools for developers and people who manage the infrastructure themselves. While self-service may sound degrading to some people, from our point of view and experience talking to customers, that extra bit of control is very crucial.”

“We definitely have a strong product pipeline that we want to churn out as quickly as we can,” he said.

Enterprise-grade private and hybrid clouds may also be a feature customers may see more of in the future, Antti added, as UpCloud has quietly responded to market and customer demand — much like how the company operates in general.

“We really like to learn from the customers and the market,” he said. “What is the real problem that we can solve with what we do? We’re able to customize a lot of our offerings, but at the end of the day, the bread and butter is in the standardized, scalable solutions that build benefits for everybody.”

In the meantime, customers can continue to enjoy UpCloud’s three-pronged approach of high-speed cloud performance, technology-rich innovations, and competitive prices. Instead of overdeploying servers to account for fluctuating processing speeds, Antti said customers can rest easy with the company’s reliability and consistency.

“It’s really high performance, and that naturally at the end of the day yields savings,” he said. “The perfect aspect of our cloud yields a lot of the benefits you may not think of up front, but it all stems from getting that high performance with UpCloud.”