TL; DR: The ecommerce sector is one of the most demanding environments for software developers, so they need web providers that can meet their specific needs. Hipex offers a portfolio of products and services aimed at ecommerce developers to help them build successful web shops on popular platforms, including Magento, Shopware, and Akeneo. The Netherlands-based company also delivers robust customer support and automated project optimization tools. Hipex stands out in the hosting industry by understanding the dynamics that drive its customers and creates products and services tailored to those needs.

To attract customers and achieve sustainable margins, hosting providers must offer value-added services that appeal to their base of prospective customers. And Hipex targets its services to a clientele that helps drive the online economy: ecommerce software developers.

And the company’s team — including its founders and in-house developers — serves clients with robust tools, customized services, and available support.

Hipex designed its portfolio to meet the unique hosting needs of software developers working on market-dominant ecommerce platforms, including Magento, Shopware, and Akeneo.

In an age where the as-a-service business model often promises that the right mix of cloud options can meet the needs of any industry, Hipex understands that developers in specific verticals can’t accomplish their goals through mainstream cloud companies.

Its targeted cloud offerings appeal to those underserved verticals, and the company is thriving because of that focus, according to Hipex In-House Developer Pieter Beens.

And Pieter came to Hipex because he found its value proposition appealing based on his personal experience as a software developer.

“I joined Hipex six months ago, and, as a development professional myself, I had mostly used conventional cloud-based hosting systems,” Pieter said. “On joining Hipex, I immediately realized just what I had been missing — that this company is so much more than just a cloud hosting provider.”

Hipex, based in the Netherlands municipality of Rhenen, embraces the opportunity to meet the needs of developers building ecommerce solutions and provides both the tools and support they need to flourish.

Ecommerce retailers operate in an aggressively competitive environment, which means they must continually innovate. They look for an edge in many aspects of their operations, including product promotion, customer experience, inventory management, and transaction processing.

The pressure on developers and website engineers to fulfill those imperatives is high. Development teams often work in environments where support and guidance are critical, but in-house expertise and resources are limited.

“We provide peer-informed support that helps our customers get projects done so they can bring their ecommerce solutions to market faster,” Pieter said.

The software development industry continues to show exponential growth. According to Evans Data’s Global Developer Population and Demographic Study, the current worldwide population of professional developers is projected to grow from 23.9 million in 2019 to 28.7 million in 2024.

As with other trends in enterprise IT, that demand is increasingly for developers who work in cloud environments. However, according to Pieter, many ecommerce developers find mainstream cloud and as-a-service offerings more constraining than enabling.

In ecommerce, those restraints can quickly affect web store performance and customer retention. That’s why Hipex differentiates itself by making developer support a cornerstone of its hosting model.

The Hipex business model was born out of frustrations with the performance of hosting at that time, especially concerning the options for online retail developers, according to Pieter.

“To fully understand the nature of Hipex’s value proposition, it is important to know that the company’s founders are highly experienced software developers as much as business people,” Pieter said.

That is why the founders built the Hipex services portfolio to meet the needs of e-commerce developers. Focusing on that target audience helped the company grow steadily and organically over the years.

“Hipex started with very few customers and zero marketing budget but grew rapidly thanks to word-of-mouth recommendations. We now work with more than 600 clients, with more being added regularly,” Pieter said.

Hipex offers a variety of premium tools in its developer packages.

Such growth has been slow but steady, allowing Hipex to offer more services and tools to its customers.

“Hipex goes much further than standard tools and services. The emphasis is on the demonstrable, and we offer potential customers the option to try us out for 30 days for free to find out for themselves.”

As a hosting provider, Hipex is not alone in pledging to offer outstanding customer support, but combining that with a focus on ecommerce software developers gives the company a unique niche.

Tailored services meet the needs of software developers working on Magento, Shopware, and Akeneo platforms. And because Hipex attracts new customers organically, the company keeps its customer acquisition costs down.

Hipex understands that many larger hosting providers may let customer support fall by the wayside in their pursuit of higher account numbers and price-commoditized service offerings. Hipex, conversely, has turned its support into a peer group experience by hiring software developers in the role.

“Most Hipex customers are software developers, and everyone on our support team is also a developer,” said Pieter. “That is because we want to be much more than just a hosting provider for developers, we want to offer them help and guidance along the way.”

As it builds relationships with clients, Hipex will even offer services like helping them find a best-fit Magento development agency.

“We have experienced many new construction projects,” Pieter said. “Hipex knows the Magento market like no other, and we regularly act as an independent advisory body for Magento web shop builds. And we think it’s important that a new Magento web shop is technically sound.”

Hipex will help customers with DevOps support services, setting up customer CI/CD pipelines, advising them on Docker images for deployment, and many other value-added features that ecommerce platform developers find helpful. According to Pieter, Hipex goes well beyond typical support, which differentiates the company from its competitors.

When a developer needs to fix an issue quickly because a project is rolling out against a hard deadline, that’s when Hipex can demonstrate its differentiation, Pieter said.

Hipex is involved with its developer clients and understands their requirements because its support teams have experience in development projects.

The focus on developer needs plays out in other aspects of the company’s services and strategies, as well. And it informs its approach to both software and hardware specification.

“Meeting the needs of developers is also the lens through which we select all of our hardware — including whether a brand of server best achieves the needs of our customers,” said Pieter. 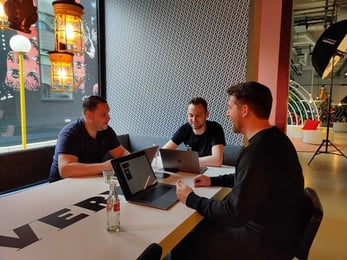 Hipex customers have access to many premium tools in every plan level. And those go beyond just hosting, entering the provisioning aspects of a platform-as-a-service. And the company also provides specialized support in addition to that.

“I believe that combination makes Hipex the most interesting service provider for online merchants, but especially for developers who work in ecommerce. That is because you get a lot of hardware-driven performance at a very good price, compared to many other hosting and cloud services out there right now.”

Hipex customers who have moved from some of the larger hosting and cloud services providers say they now get faster setup, better support, and lower prices, according to Pieter.

“We have a 24/7 support process that will alert our team and get them out of their beds if something needs immediate attention. But it’s not just a single factor that makes us distinctive; it’s a combination of attributes that sets us apart. In sum, our goal is to be a complete ecommerce hosting provider/partner.”

Hipex: Focusing on the Future with Innovative New Products & Services

The rest of 2020 is gearing up to be a busy time for Hipex, as the company has at least three new service and product offerings in the pipeline.

“We are mostly focused on dedicated hosting and shared hosting, and later in 2020, we intend to introduce a container-based model so that our customers can scale according to their market needs,” Pieter said.

That feature should prove popular in the ecommerce space, which is subject to market trend-driven demand surges, including seasonal buying patterns and Black Friday.

“Hipex will provide customers with Git repositories, so you can develop your basic code and we will do the rest, like adding automated performance testing that will halt a release if the performance of your web shop will degrade because of a change you just made. So, as well as hosting, we do your entire DevOps,” Pieter said. “That will enable our customers to streamline their workflows and focus more on building out their web shops and revenue streams. And, lastly, we are looking at launching a tool that will enable automated performance optimizations.”

With those innovations, Hipex is achieving the differentiation model that many mid-market value-added hosting providers strive for. The company understands that hosting needs are becoming increasingly specific for many consumer-facing applications, and those resource-stretched developers need a provider that offers scalable support and management services.

Hipex frees up those developers to apply their skills directly to their business objectives.