Grsync: How the Open-Source Graphical User Interface for Rsync Has Maintained its Popularity Through Simplicity and Functionality

By: Sean Garrity Posted: March 4, 2019
Follow "The Hosting Blog" daily as hosting experts, programmers, and tech managers go in depth on a variety of tech-related topics.

TL; DR: Grsync is a free open-source platform that fills a specific need in the development community: providing a graphical user interface (GUI) for rsync. Rsync is a powerful tool for synchronizing files and folders, and, though it has many other useful features, it lacks a responsive interface. For users who aren’t familiar with — or prefer not to use — a command line text interface, Grsync makes the processes rsync is running easier to monitor. And Grsync remains the only option for deploying a GUI to rsync, even winning accolades from the Linux Journal for its usefulness nearly 15 years after its release.

Rsync has been a popular synchronization and backup program for managing files across networks since 1996. But while many users appreciate what rsync does, some don’t enjoy its command-line interface. In fact, less technically experienced users may have difficulty implementing rsync at all.

Back in 2004, Orsoni Piero saw this disconnect between the usefulness of rsync and its usability. He recognized that its command-line interface made it too difficult for some. He thought that a graphical user interface (GUI) would provide more opportunity for interaction with the software by creating visual markers — including checkboxes, transfer processing visuals, and text entries.

“I was using rsync more than 15 years ago and thought the software was transformative at the time. But I saw more possibilities, which is why I wanted the features a GUI would provide,” Orsoni said. 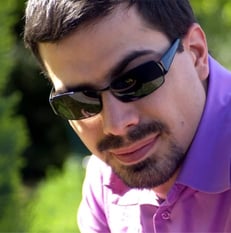 Orsoni Piero released Grsync in 2005 as a GUI for rsync.

So he created Grsync, a GUI that added functionality to rsync rather than replacing any aspects of the software. His project was aimed at making rsync accessible to users with more varied technical abilities.

Grsync makes the tasks performed on rsync more visible, including synchronizing music collections on removable devices, backing up files on networked drives, and mirroring files — among many other automated functions.

The program offers additional features, including backup settings that can be modified according to tasks, and delivers three levels of options — basic, advanced, and extra.

Other features include Preserve Time, which saves file modification time; Ignore Existing, which ignores files that already exist in the database; and Delete On Destination to get rid of files in a destination that have been removed from the source.

While rsync remains a popular tool with developers, Grsync provides an intuitive window that translates code into dashboard commands. And while expanding on rsync’s usefulness, Grsync opens up the software to a broader audience of users who can benefit from its capabilities.

Grsync users can start by building a command line to the program by simply selecting options on the dashboard. From there, backing up data using Grsync is simple. First, users add a new session, at which point they’ll be prompted to choose a backup option. Next, they’ll need to enter a folder or path into the required fields.

Users can then either execute their backup plan or run a simulation to see what would happen if it were deployed as-is. The actual work of backing up files and folders is completed by rsync. However, with the Grsync tool, users have a way to watch the synchronization process in real time.

“Grsync is simple, user-friendly, and more fun to use. It makes rsync intuitive,” Orsoni said. “And from the feedback I’ve received about Grsync, users find that it’s a good way to learn about the options they have.”

Orsoni also talked about how useful Grsync can be in synchronizing folders from two separate network locations. However, rsync software provides only one-sided syncs. It doesn’t have the functionality for two-way synchronization, in which updates from both sides are merged to create two identical directories.

But the program operates well on its own, requiring very little maintenance to function properly. That adds to its appeal as a reliable backup and transfer tool.

“I get some bug reports, but it doesn’t have any big problems, as far as I can see,” Orsoni said.

Grsync also owes some of its popularity to its open-source nature. That means that if users want to change or modify the software to their needs, they’re free to do so.

Luckily, Grsync users are a devoted bunch who have undertaken projects to enhance both its usefulness and design. Some have designed better icons, while others have contributed translations of the GUI’s commands in their own languages. Today, Grsync is available in more than 15 languages — many of which were added by the community.

“There are always projects going on in the community. People like the program, so they want to contribute,” Orsoni said.

Users also reach out directly to Orsoni to ask him to develop other functionalities. For example, some want remote browsing or more options to choose their remote destinations. Others may want to choose their destinations. Businesses also contact him to discuss personalization to align the software with their operations.

Grsync’s interface expands the reach of rsync by decreasing the level of technical skill required to use it.

However, Orsoni doesn’t have any plans to change the software to meet the demands of businesses — though he isn’t opposed to users modifying his project on their own.

“I’m not planning on overhauling the software. Companies have been asking about automation, like scheduling, even though some of these are a bit off-topic. Scheduling should be done by a scheduling application,” Orsoni said.

This simple, focused point of view has kept Grsync so useful for more than 15 years. It doesn’t aim to do anything more than what it was designed to do — provide an alternative to command-line control for rsync. But this focus on keeping the project as it is doesn’t mean that Orsoni doesn’t update Grsync. On the contrary, he has introduced updated versions since 2010.

“I am always updating it so it will continue running efficiently,” he said.

Grsync: A Robust Tool More Than a Decade in the Making

Though Grsync is more than a decade old, no program has been created that replicates what it does or improves upon it. For users who want a GUI tool for rsync, Grsync is their only option.

While Grsync has added many new capacities since its earliest iteration in 2004, and Orsoni has worked hard to release updates consistently, the software remains free. And one of those new functions is that sessions can be shared with other users and functions on Linux, Windows, and MacOS. It can run in GNOME, KDE or Unity environments, as well as on remote targets.

Though Orsoni has made updates, Grsync has never moved much beyond its original purpose — for which he believes there is still a need.

“Grsync has been well-received, and it is still doing distributions all these years later. People like it,” he said.

Orsoni’s work has been recognized for both its quality and necessity, and is prominently featured on a list of the best open-source backup software tools for Windows — which noted Grsync’s robust backup options.

It also earned an Editor’s Choice Award from the Linux Journal, and the author noted, “If you’ve ever felt rsync was powerful but too complex to use on a regular basis, I highly recommend Grsync.”

Though Orsoni hasn’t benefited financially from Grsync, he is still humbled by the software’s longevity. And its continued success has been more than enough of a reward for its developer.

“I’m pretty satisfied with the project,” Orsoni said. “It’s been a nice journey.”