By: Ryan Frankel Updated: January 11, 2018
Follow "The Hosting Blog" daily as hosting experts, programmers, and tech managers go in depth on a variety of tech-related topics.

TL; DR: CodeGuard is a time-saving and precise automated backup solution, featuring differential backups and full-site recovery. No other service offers this level of simplicity while providing full website peace-of-mind. The system uploads site structures and databases to a git repo and sends ChangeAlert reports daily. Users are notified of files added, changed, or removed, and are then given the freedom to rollback to a working version of their site with ease.

One of the most problematic perils anyone running a website will eventually be faced with is not having a good backup of their site when disaster strikes. Maybe you accidentally deleted an important file or database row, maybe your site was hacked, or files might have been updated, leaving your website malfunctioning and you frustrated.

Wouldn’t it be great if there were a simple solution to suddenly broken websites, one that allowed website owners to roll back to a time when their site was working properly?

“Why wasn’t there some kind of way to protect me from myself?”

Luckily for us, there is — there’s CodeGuard.

CodeGuard is a revolutionary backup service for websites that is fast, reliable, automatic, and trusted to keep track of all changes made to your site daily. We had the chance to sit down with CodeGuard CEO, David Moeller (@david_moeller), to find out more about this slick service.

CodeGuard is more than just a website backup — it runs git in the Cloud and makes version control accessible for all. “It’s sort of a lazy man’s git, where we’re just doing it for you,” David said. Its unique differential backup system allows you to store every alteration ever made to your site. If you restore the backup from four days ago and there are still issues, you can keep clicking back to older versions until you find the point in time at which the website was working properly.

CodeGuard launched in CloudFlare’s App Marketplace. By the end of 2011, CodeGuard was backing up roughly 10-20,000 websites and supporting at least 20,000 users. Since then, they’ve partnered with several hosting providers, including RackSpace, HostGator, among others, who offer CodeGuard to their customers. 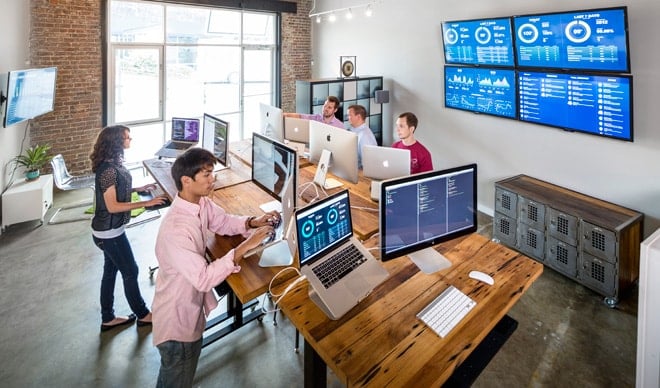 The CodeGuard Team works tirelessly to protect websites against their innate vulnerability.

“Hosting providers are increasingly reaching out to us to partner,” David told us; however, they market both directly to consumers or small business owners as well as to hosting providers. On the direct-to-consumer side, David estimates that roughly one-third of CodeGuard customers are trafficked in from Google searches, one-third via word-of-mouth, and the rest flow in from a mix of the two.

“There are two big buckets of customers,” he said; there are the customers who have experienced a website crisis, and then there are those who have been referred to CodeGuard by their web host provider and are looking for a proactive, preventative measure of security.

With CodeGuard, files are compressed and encrypted on S3. Website owners may choose from various set retention rates that CodeGuard offers, or opt for infinite retention. With this option, every change you or a malicious external source make is captured and cataloged with options to revert back to any previous version at any time.

“It’s sort of a lazy man’s git, where we’re just doing it for you.”

CodeGuard offers four plans to choose from, depending on how many websites you’re looking to protect. Whether you’re an avid blogger or a multi-site multimedia business conglomerate, there’s a CodeGuard package that meets your needs. All plans include unlimited databases, with back up and monitoring to occur daily.

Most website owners don’t maintain their own website backups, and they’re usually under the impression that their web host is taking daily backups. While this might be true, typically a web host is taking a full backup of the entire server that houses your website along with hundreds or even thousands of other sites.

Let’s say that something on your website changes Thursday evening and you don’t catch it on Friday before heading home for the weekend. Monday morning comes, and you notice your website is broken, so you call up your web host to ask for a restore. After waiting hours, potentially, for someone to get to your restore, you are told that they only have the latest server backup from Sunday night and your site is broken in that backup as well.

Now given the same scenario with a site protected by CodeGuard, Thursday evening after the daily backup, you would get an email reporting a change to a file within your site. 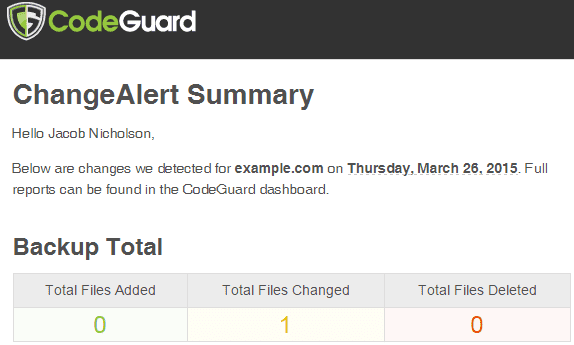 You would be shown which files were added, changed, or deleted. 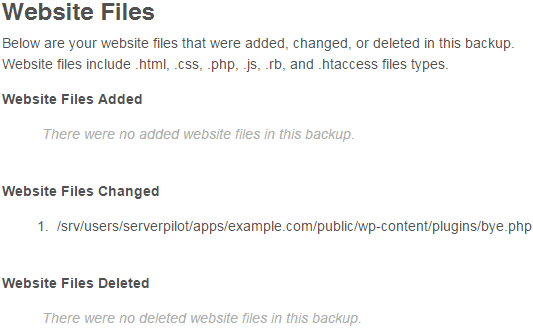 The CodeGuard ChangeAlert shows you exactly what files have been added, changed, or deleted.

You wouldn’t have to wait on your web host’s support team to start fixing the problem. With CodeGuard, you can jump right in and look at the file that was changed to explore what might have gone wrong.

If you had recently been editing this file and just forgot to end a line with a semicolon or something along those lines, you could simply edit the file again and fix your mistake.

If instead this file was overwritten by a hacker and now doesn’t contain any of the original content, you could simply restore this file from the last backup that CodeGuard ran on the site prior to it getting hacked. 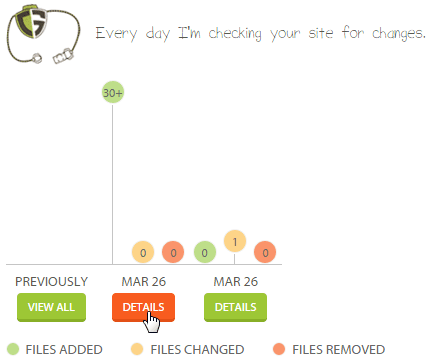 CodeGuard easily displays the changes to your site over time.

After selecting the last backup prior to the file being modified, you can choose to do a full website restore, or in this case, simply restore the single file that was modified. 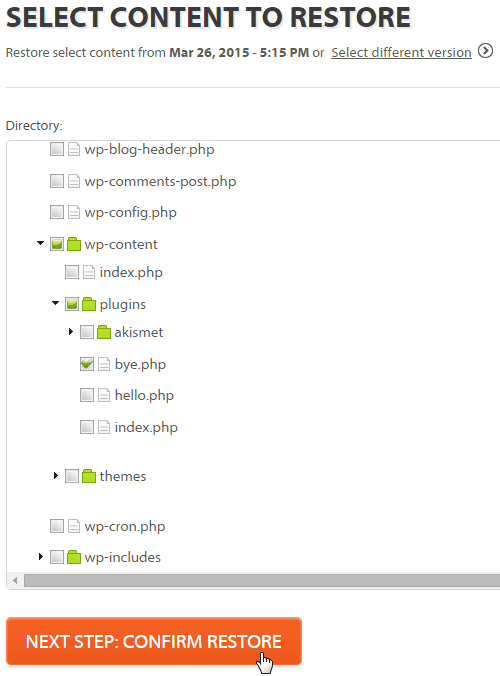 The Catalyst for CodeGuard

While attending the Harvard Business School, David and a friend decided to compete on American Inventor, a reality TV show for inventors. They had created a bicycle clamp, called The Claw, and ended up winning; their product went on to be sold at Lowe’s and Home Depot and it was licensed to a division of Whirlpool, Gladiator.

While half of David’s summer was devoted to the reality show, the other half he spent doing investment banking for large companies. During this time, David decided he wanted to venture into small business and wanted to do something related to the Internet. 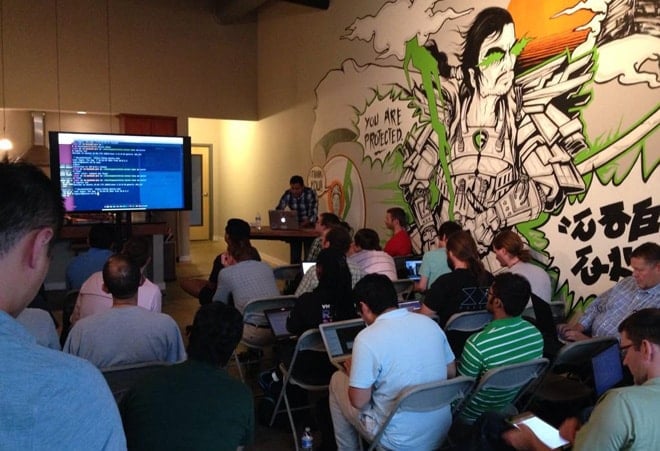 CodeGuard protects over 250,000 websites from user error or hacker demise.

In 2007, after shooting for American Inventor, there was a month hiatus before the show would air live. David had begun to work on a website for their product, and in that process his computer crashed and many files were lost. He spent a tremendous amount of time recreating all of his hard work and it was a mess to get the site back to normal.

“Why wasn’t there some kind of way to protect me from myself?” David remembers thinking. Two years later, David connected with a Computer Science professor at Georgia Tech who introduced him to an SEO-savvy group of guys who shared similar horror stories of small businesses falling prey to the evils of website data loss.

Spontaneously broken websites can stem from hackers, server issues, human error, or malevolent employees, among other causes. Basically, websites are incredibly vulnerable and there’s no solution for that — or there wasn’t until CodeGuard.

In agreement with this group of guys, David and his buddy started the conversation of CodeGuard, which just began as a hunt for a solution to websites’ vulnerability flaw. 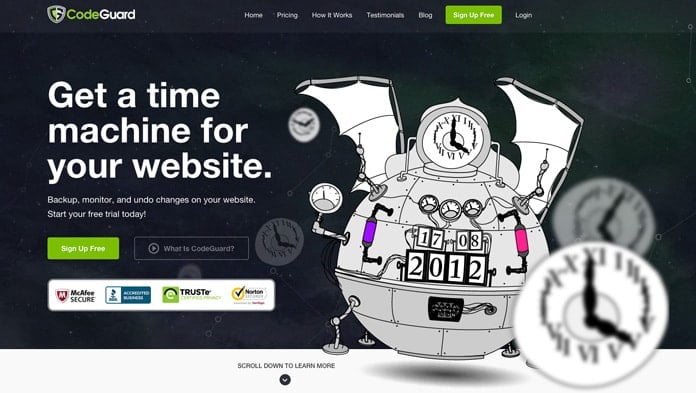 CodeGuard acts as a time machine, allowing you to backup, monitor, and undo website changes.

David described their initial game plan as, “We are all very keen as to the problem. Let’s just start there,” but conceded that, “It was about a year after really starting with this problem statement that we got to a solution we really liked.”

They began working with alpha testers to consider their options. After trying out several potential solutions, including a WordPress plugin, they settled on a final idea. Their solution involved FTP or SFTP credentials, depending on the desired level of security.

In May of 2011, CodeGuard was launched at TechCrunch Disrupt in New York City. Their pitch centered around the core concept of the possible solution they had identified, which was really a website backup system in the Cloud, with revision control.

“We called it a time machine for your website,” David said. CodeGuard ended up winning the Audience Choice award, showing that there were definite possibilities with this potential solution.

The World Wide Web is a minefield of sudden attacks on websites and their precious files. Without warning, a website may fall victim to the devastation of user error, server downfalls, or hacker maliciousness. As a website owner, for your own sanity, why wouldn’t you jump at the chance for the ultimate undo option?

CodeGuard has changed the website recovery and repair game in a revolutionary way. 50,000 customers are experiencing the peace of mind and security that CodeGuard offers. More than 250,000 websites’ databases are CodeGuard protected, which means their webmasters have the power to revert their changes at any time, saving countless amounts of time, worry, and stress. 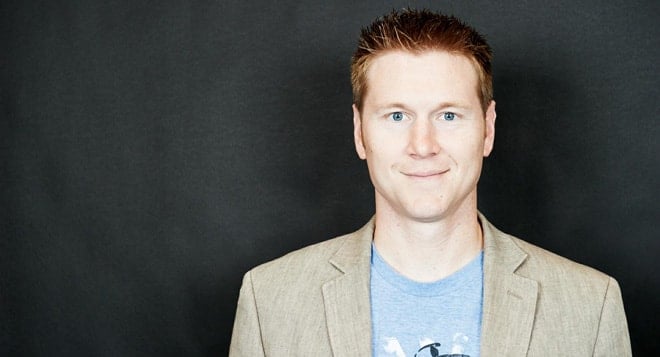