How Clouding.io is Disrupting the Spanish Virtual Hosting Market with Transparency, Reliability, and Commitment-Free Service

By: Sean Garrity Posted: March 4, 2019
Follow "The Hosting Blog" daily as hosting experts, programmers, and tech managers go in depth on a variety of tech-related topics.

TL; DR: Barcelona-based virtual host Clouding.io has always aimed to do things differently. Before it even launched, the company’s founders began by using their wealth of experience in the hosting industry to examine common pain points and determine which features actually add value for customers. Clouding.io’s approach of offering clients only useful services has also helped with its continued innovation and expansion. Today, the company provides archivable and scalable servers and billing by the second — both practices once unheard of in Spain.

Spanish virtual hosting company Clouding.io was founded with a lofty initial goal: to determine which typical industry practices were actually useful to clients. Before the company launched, its founders spent a considerable amount of time and resources researching whether common hosting strategies and packages truly added value for customers.

“We re-evaluated all of the core beliefs of the industry to find out if they were true or not,” said Xavier Trilla, Clouding.io’s CEO.

Perhaps unsurprisingly, they discovered that many typical features offered by hosts were either misleading or useless. In response to those eye-opening findings, Clouding.io decided to eliminate registration fees, monthly minimum payments, fine print in its contracts, and do away with convoluted cancellation processes — which were all fairly standard practices across many companies in the sector.

Clouding.io was one of the first hosting providers in the Spanish market to offer billing by the second.

“I still remember a supplier who insisted that, upon cancellation, they must be notified by fax,” Xavier said with a laugh.

The founders also included many of the features they believed added value for customers. Clouding.io was one of the first companies in the Spanish market to offer billing by the second, and it added services that included scalable servers, archiving servers when not in use, snapshots for restoring features, and servers that can be spun up in seconds.

And, though the company felt its products were already more useful and transparent than most, it didn’t stop finding ways to differentiate itself. The company wants to ensure users are fully satisfied with the service, so it offers a free trial that doesn’t require a commitment. And, in keeping with that no-commitment pledge, the free trial doesn’t roll over to automatic renewal once the trial period ends.

“We don’t want a client or customer to contract with us only because they forgot to cancel the trial,” Xavier said. “We want them to work with us because they’re convinced that we’re the best option for their needs.”

Customer Service that Meets Clients Where They Are

Clouding.io’s commitment to client needs is made clear throughout its business practices. It’s particularly apparent in the way it builds relationships.

To maintain that focus on clients, the founders chose to keep complete control of the company. They have never taken outside investment, so the leadership can stay involved with daily operations and make decisions that benefit customers, not investors or shareholders.

That approach also helps company leadership create a supportive work environment for its employees. And that positive work culture translates into customer satisfaction. But perhaps the company’s most valuable feature is its reliability.

For example, if there’s a problem with a server, the Clouding.io team can remedy the problem in seconds, not hours. And all maintenance is performed progressively, so clients don’t experience downtime due to routine infrastructure fixes.

“We have an infrastructure that never gives you headaches, whether that’s because of performance, cost, poor customer service, or uptime problems. I think that is our main benefit,” Xavier said.

But there’s no one service or feature that makes Clouding.io invaluable to its clients; Instead, it’s the combination of client-first products and responsive support that set the company apart.

“In the end, all the components or features of Clouding.io must enhance the customer’s experience when using our services,” Xavier said. “That’s my favorite feature — offering a flawless experience to our customers.”

For Clouding.io’s customers, the infrastructure must always work. All of the company’s virtual server disks are stored in a Ceph cluster to ensure continuous functionality. In the case of a hardware failure in a hypervisor, clients can have service restored in a matter of seconds.

This same infrastructure gives clients more options, as well. Clients can choose how much disk space they assign to their server, without being forced to buy RAM or CPU storage they’ll never use. They can also archive servers when they’re not in use, so they don’t have to pay more for them.

And, to stay competitive in an increasingly competitive market, Clouding.io always considers how its features can bring value to customers. 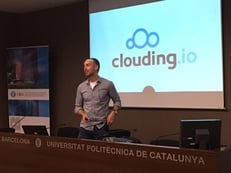 Xavier Trilla, Clouding.io CEO, spoke with us about the host.

If the company decides a feature is worthwhile, it rigorously tests its functionality before rolling it out to clients. Clouding.io needs to ensure it works well so customers can use it immediately.

“We hone and sharpen our ideas to see if they add value, what the requirements to implement them are, and if they will be suitable and useful for most customers,” Xavier said.

A few features have recently passed the test and will be developed throughout 2019, including API, 64-core cloud servers, and packages with 512GB of RAM. A new system of backups with incremental restores, more powerful hypervisors, NVMes, and more bandwidth for cloud servers are also in the works.

And the company is making some internal strides as well, including receiving new accreditations and giving its website a refresh.

An Elevated Hosting Experience More Than 15 Years in the Making

Clouding.io was born of the pain points its founders saw during their more than 15 years of experience in the industry. Those experiences led them to plan carefully from the beginning — instead of solving problems as they arose — and make choices that benefited consumers.

“It gave us a fantastic perspective since it’s a market we witnessed emerge and grow and in which we’ve served thousands of clients,” Xavier said. “Everything we’ve achieved has always been thanks to the support of our customers.”

“We will use the doors that our growth opens up to improve the quality of our service even more.” — Xavier Trilla, Clouding.io CEO

Those customers have helped the company grow, and conversations with clients give Clouding.io even more information about what they find valuable. That is vital in an industry that continues to change so rapidly.

“On some occasions, we are so involved in a project that we need a customer’s fresh pair of eyes to see things faster than we do,” said Xavier.

This model of client feedback will help Clouding.io stay grounded as it continues to grow. Over the last two years, the company has tripled in volume, but it remains committed to ensuring the reliability of its service never wavers.

“We will use the doors that our growth opens up to improve the quality of our service even more,” Xavier said.